Rating All of the Boots in Death Stranding

by LizardRock on Nov 26, 2019 @ 12:04 PM (Staff Bios)
Comment(s)
Hideo Kojima's Death Stranding has released and it has all sorts of people talking. The post-apocalyptic package delivery game puts a unique twist on modern gaming trends.

And what is a walking game without boots? There's a variety of different options for the player's feet, each with different designs, features, and stats. But how do you decide which of these boots has the biggest leg to stand on? After extensive research and a mild case of trench foot, I've broken down each pair of boots in the game, ordered from worst to best.

Before you ask, Sandleweed is not a boot. 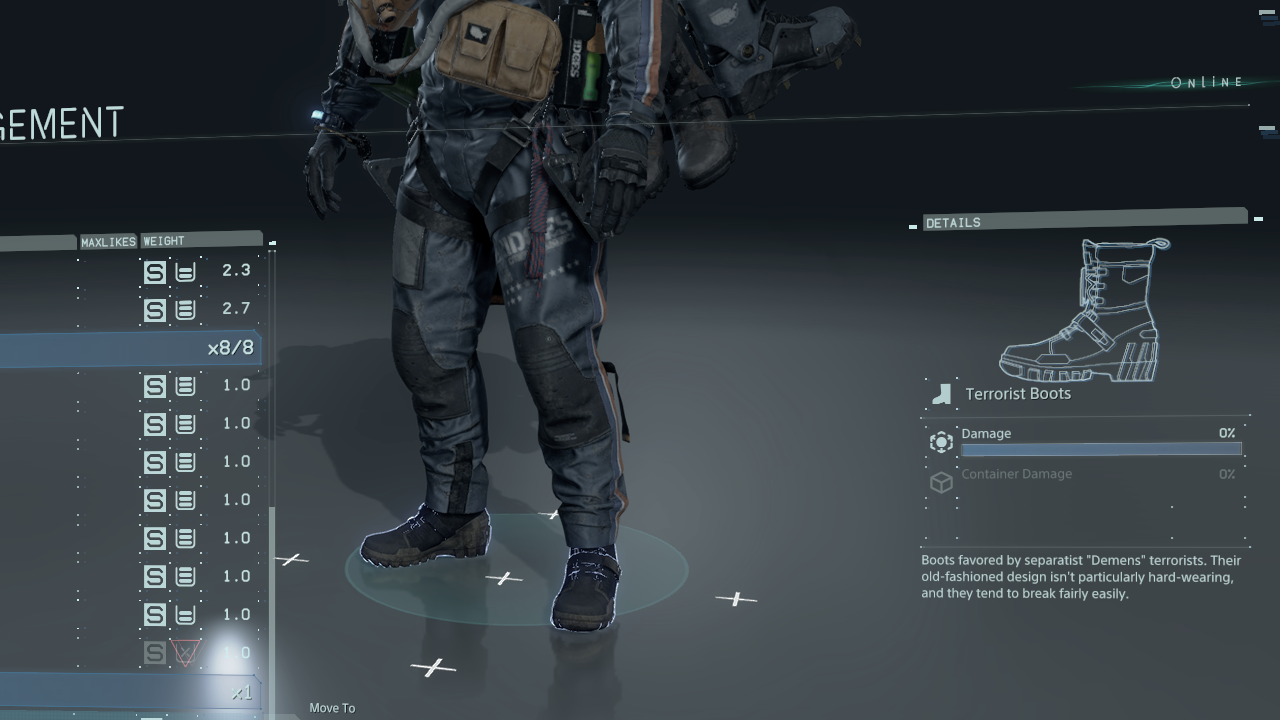 Let's begin with the bottom of the boot barrel: the Terrorist Boots. There's a handful of reasons why one might expect these to be one of the better pieces of footwear available in the game. It doesn't appear until 12 to 18 hours into the game and the only way to acquire them is to steal them from an organized group of gun-wielding professionals.

But no. These boots are absolute garbage.

Terrorist Boots are the incels of the boot world. They're such a god-awful creation incapable of providing to society in any meaningful enough way that joining a terrorist organization is the only way that they'd ever get to know the warm embrace of a human.

Now, in the interest of honesty, I have to tell you something. I had worn Terrorist Boots before. But in my defense, I was naive then. I was young, dumb, and full of Chiral Crystals. They seemed mysterious and dangerous at first. I thought they were the bad boys of boots. Turns out they were just bad boots. They didn't match my outfit, they broke down halfway through my next delivery, and I'm pretty sure they took 7 dollars from my wallet.

Terrorist Boots get last place, I do not recommend. I wouldn't even recycle them at any stops or stations, out of fear that their molecular components might spoil my other boots. 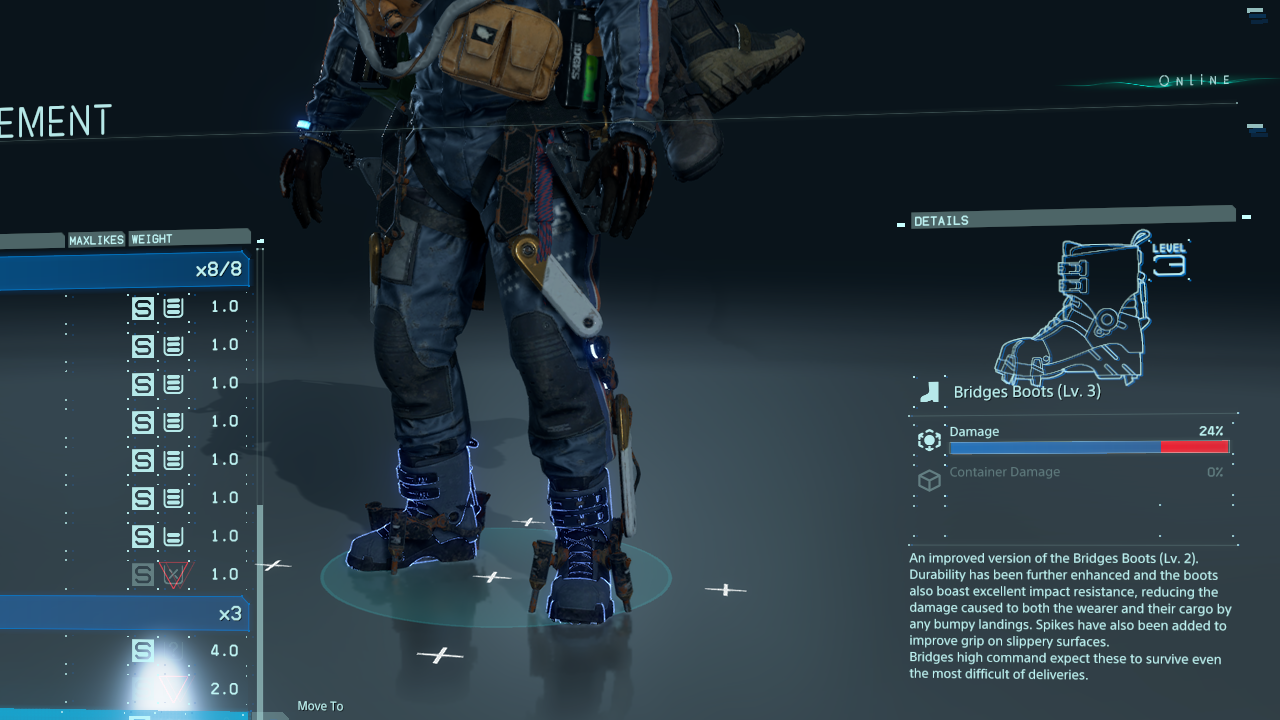 The world of Death Stranding is exciting, I get it. Sometimes you don't want exciting. Maybe you want something simple, bland, and otherwise unremarkable. You want Bridge Boots, the Honda Accord of boots. These boots are with you from the very beginning, they match your color scheme, and they have multiple degrees of durability.

There's nothing wrong with wearing Bridge Boots. Sure, every porter and their mother has a pair, but that's for a very understandable reason. They're the only footwear that you can craft at a stop, after all. But deep down, do you really want the footwear equivalent to a skinless chicken breast dinner? 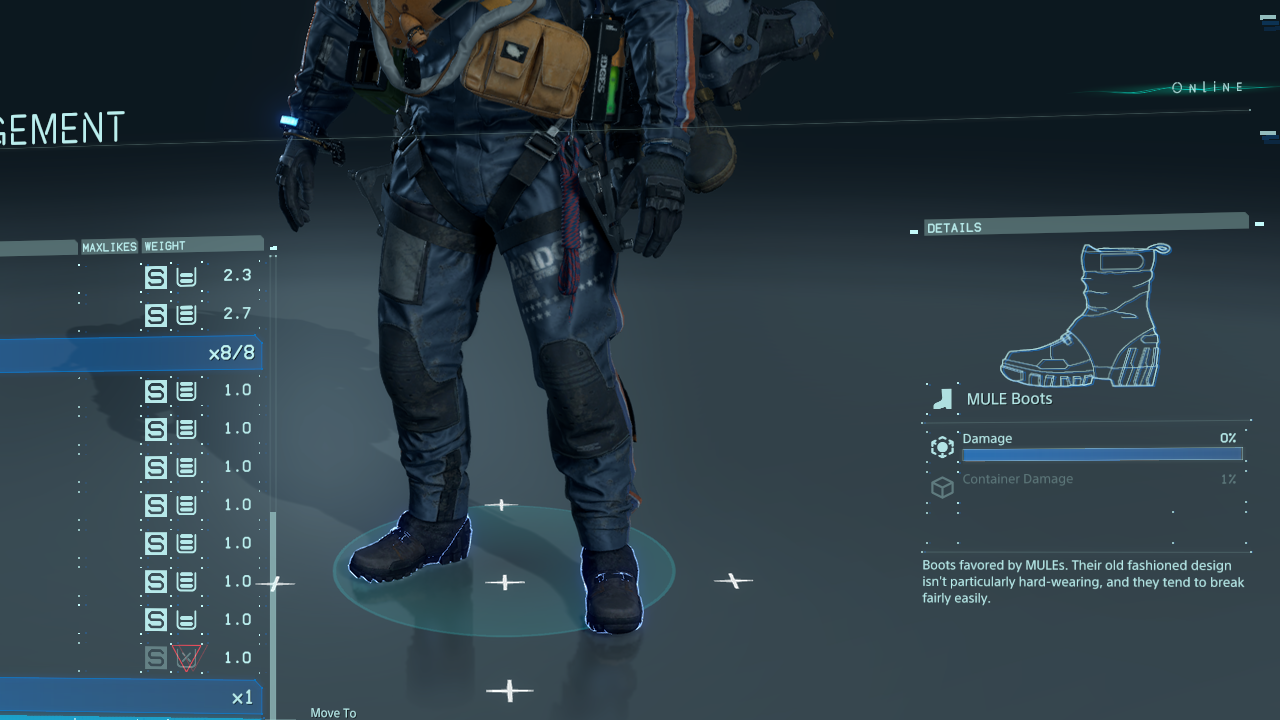 Next in line are the MULE Boots. The value that lies in these foot coverings is more conceptual than physical. Your first pair of MULE Boots aren't entirely unlike your second girlfriend/boyfriend. All you've ever known are your standard-issue Bridge Boots. Then you look over at a group of package-stealing mailmen and you notice that they have a different pair of boots for you to try.

These boots encourage you to come out of your comfort zone. They help you see what you've always been capable of. Eventually, you start developing more confidence. Before you know it, you don't need each other to get by anymore. You and the MULE Boots part ways, because you're stronger now. The MULE Boots understand this and are happy to see you grow.

They're not the most durable pair, but they hold a special place in every young porter's heart. That deserves to be recognized. 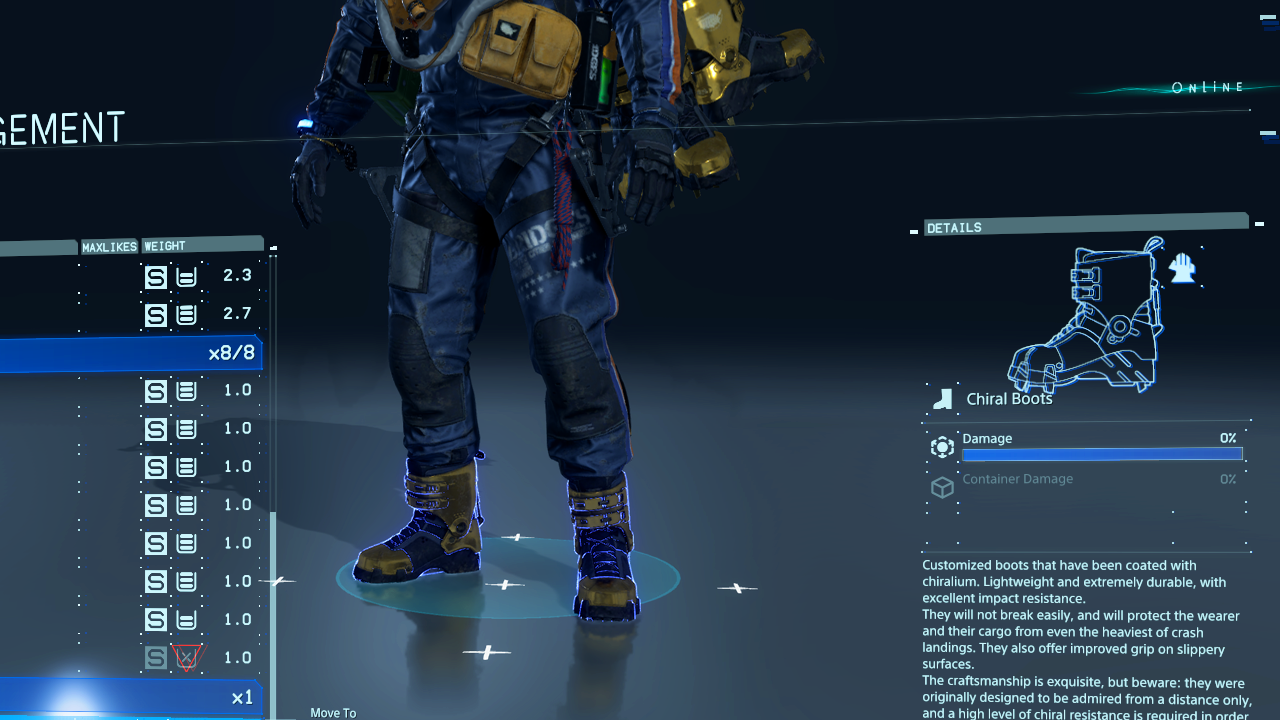 If dubstep and slushies made of Grey Goose could be a boot, they'd look like the Chiral Boots. These sleek black leathers are the perfect contrast to the solid gold plating of Chirilium that covers the surface. They find the perfect balance between respectfully flashy and 100% cash money. Chiral Boots probably own more than one pair of Air Pods but are respectful enough of other's financial status to not flaunt them publicly.

And if their clout-blasting aura wasn't enough, they're the most durable boots available too. You want to travel across the entire country, mucking through mud and climbing on rocks? These boots have you covered. Why not shove said boots up the private quarters of MULES, Terrorists, and BTs alike. Don't worry, the Chiral Boots can handle it.

When there was only one set of footprints in the sand, it was then that the Chiral Boots carried you.

There are plenty of options for what you wear on your feet in Death Stranding. Most of them are perfectly acceptable options, too. So go forth with pride. Don your favorite pair of shoes and face adversity head-on. You have my support. Unless you wear Terrorist Boots, then may a never-ending time fall shower upon you.

Bonus GIF: Me, throwing terrorist boots into the bottomless tar pits, where they belong.

Specifically for their social platform, but the implications are worrying.