But not Straight-to-DVD, either.

by LizardRock on Oct 21, 2021 @ 07:56 PM (Staff Bios)
Comment(s)
Theres nothing quite as classic as a story where a couple of kids go on an adventure. Even more so when their exploration leads them toward extraterrestrial life, supernatural discoveries, and the truth behind their father. And while Echo Generation has all of that, its not exactly put together right.

Echo Generation is an RPG adventure game by Cococucumber, an indie game studio in Canada. The games protagonist, a 14-year-old kid living in what looks like the American 80s, takes their little sister out to occupy time. And in doing so, they discover strange and secret events. Throughout their efforts, they fight a variety of enemies, talk with friends, and use various items theyve acquired to solve clues and make progress. A turn-based RPG, one of the bigger draws to the game is the quick-time-event style attacks. Similar to what was popularized in games like Super Mario RPG, successfully performing these attacks grants the player the full potential of an attack.

The game makes a fantastic first impression. The well-crafted graphical style and perfectly thematic music do a great job of setting the stage for what kind of world youre in. They let players ease into the games mechanics, such as combat, in a gentle but not boring pace. It felt like the start of a Steven Speilburg film and I was ready for it. Unfortunately, the longer I played, the less enjoyable the game became.

It doesnt take long to see the best that Echo Generation has to offer. Itll be the first thing you see, actually. Im talking about the art style.

Almost everything is made of voxels (like pixels but 3D), giving it a retro, low poly style. One thing the developers did, however, was not stay too true to that style. Far too often, a game will remain firm to the rules of a graphical look, even to the point of hindering the total potential for quality. Echo Generation didnt do that. The resolution of objects would vary based on that specific object's needs. Larger, less detailed items like ladders or walls will be rather low res, using a small number of voxels to represent it. But when detail is important, like on complicated items, signs, or text, the resolution would shrink. They ensured that everything could still be seen and understood cleanly. 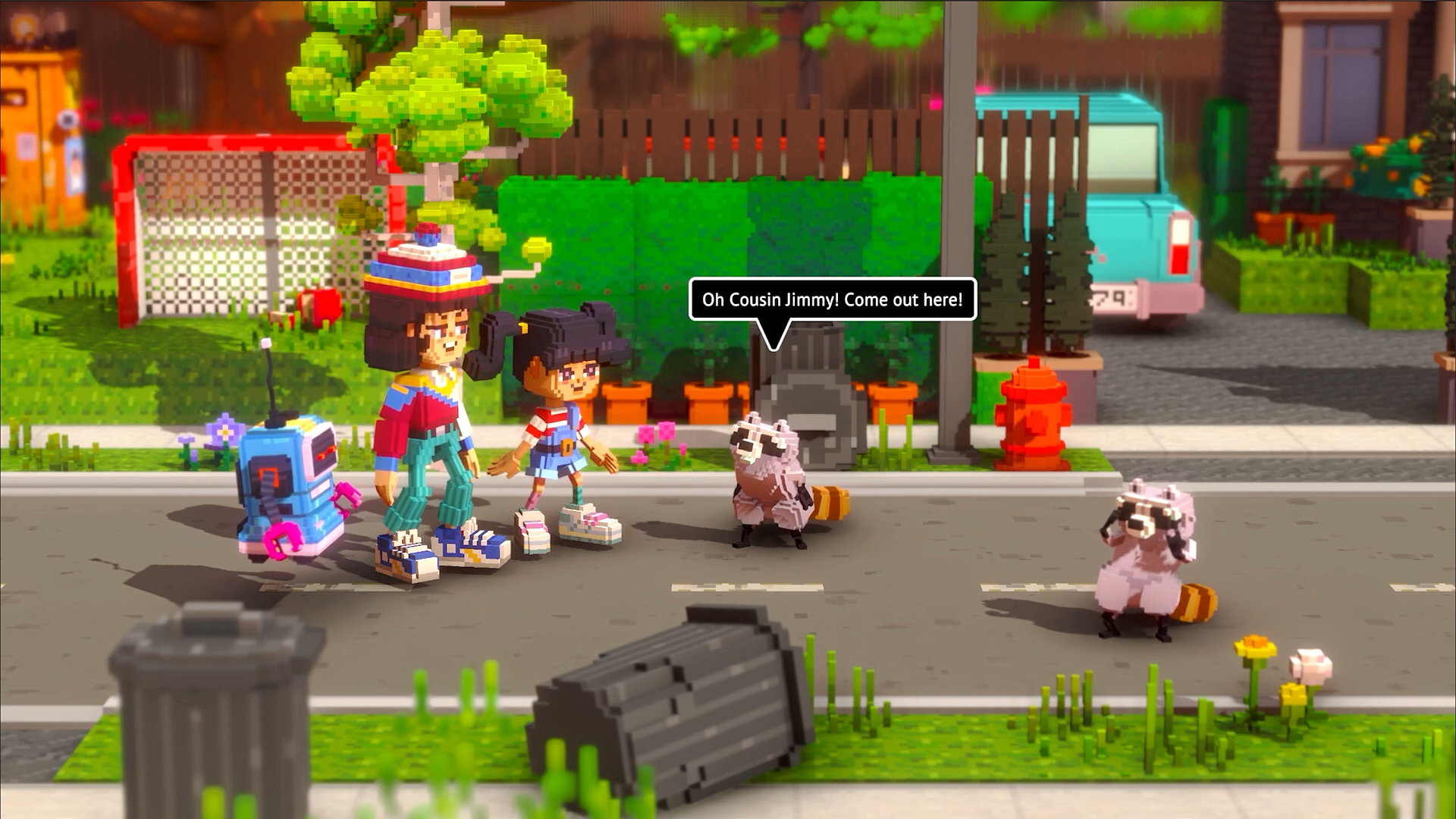 Special attention should also be given to different environments the player will encounter, and the lighting system used in each. The player will encounter bright sunny suburbs, dark foggy forests, and luminous graveyards. Theres an enjoyable diversity to all of the places youll encounter. Each one made the most of the Unity Engines lighting system, as well. While seemingly in contrast to the retro aesthetic of the game, each area makes the most of the lighting. High-quality lights and shadows help give each area a level of atmospheric life that wouldnt have been possible on a more faithful design. Neon light cast color all around them, sunbeams shown down from above, The lighting breathed a level of life to the world. This can be best seen in places like the Graveyard and the forest path leading back to the suburbs.

Lets not forget the music, either. The various tracks that play effectively represent both the 80s-like setting and the retro RPG style it takes inspiration from. Each different environment has the right music for the mood. Vaporwave-esque tracks set the cinematic vibes while casual chiptunes pay homage to the retro RPGs to gaming culture of that era. Each track was unique but enjoyable. Its only flaw was that a few cassette tapes loop in a somewhat awkward way, but that didnt kill the mood enough to stop it from being one of my more highly revered aspects of the game.

Good beats and pretty graphics arent enough to make a good RPG, however. And unfortunately, it doesnt get much better from there. From narrative decisions to mechanical features, nearly everything else either lacked depth, clarify, or a sense a refinement necessary for them to be enjoyable.

The first and most frustrating issue was with the combats QTE (quick time event) component. Whenever a character attacks, the attack of choice comes with a special micro-game to play. This can be a rapid button, press, pressing a button at the right moment, or performing a DDR style combo of buttons. Successfully performing the mini-game would deal full damage, while failing it will result in reduced damage. This works defensively, too. When an enemy attacks, the player has to press the button at the right moment to reduce incoming damage. 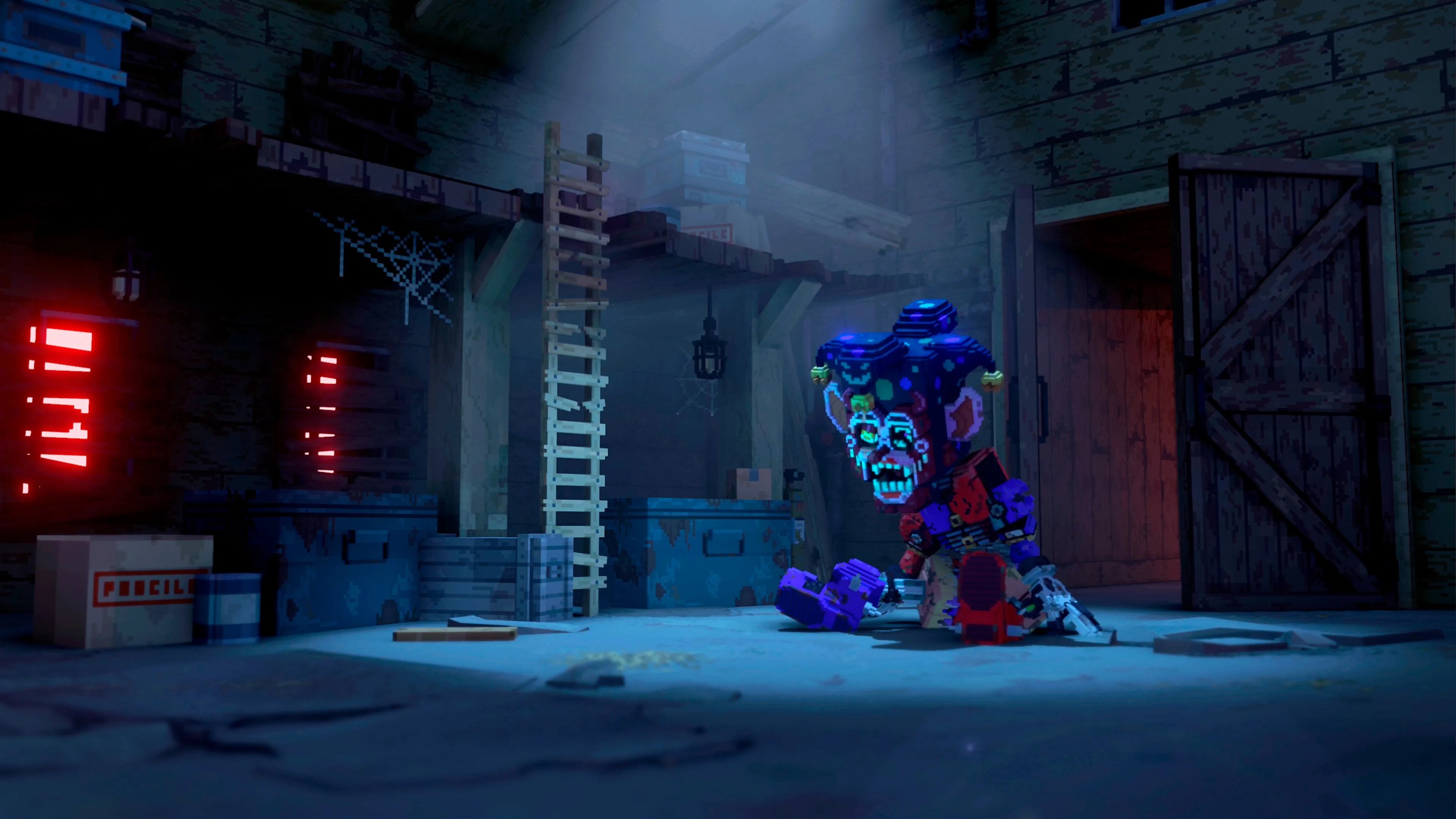 While this isnt inherently a bad idea, it was sullied by a combination of finicky and hard to complete micro-games and a painfully harsh punishment for failure. Most if not all attacks would only deal somewhere between 30% to 50% of the potential damage on failure. And many of the attacks had micro-games that I simply couldnt seem to get the swing of. After a point, I was no longer willing to sacrifice my combat survivability to experiment or practice these new attacks. Not that it mattered. A majority of the attacks you unlock are just a slightly modified copy of another attack, just with a status effect added.

But eventually, I settled into a set attack of choice for each character, and powered on. And with my resignation, my eyes were open to see how much of a narrative mess the rest of the game was. Far too often, I had no idea where to go, where I could go, or where I SHOULD go. And with several unresolved narrative side stories and little to no indication as to what is important or not, I spent a fair amount of time running back and forth across the entire map, hoping that somehow this random item I had would interact with a random object in the right way. And with no fast travel option, this became increasingly tedious.

This section will reference various stages of the game. While it will not contain major spoilers, it may reveal areas or stories that could be considered spoiler in nature. If you want to avoid seeing this, skip to the conclusion.

Echo Generation starts out fairly conducive. You know what's happening, and there isn't too much to see or interact with. Since the main gameplay loop outside of combat is essentially delivering random items to random people, the areas available in early-game made for a fairly enjoyable place to roam. But as the game progressed, more areas would become accessible, and the seeming randomness of involved items became wider and more unrelated. Sometimes, items I would find wouldnt be used until much, much later, while other times I was having to make multiple trips across the map trying to find the one thing I need to progress in the story. 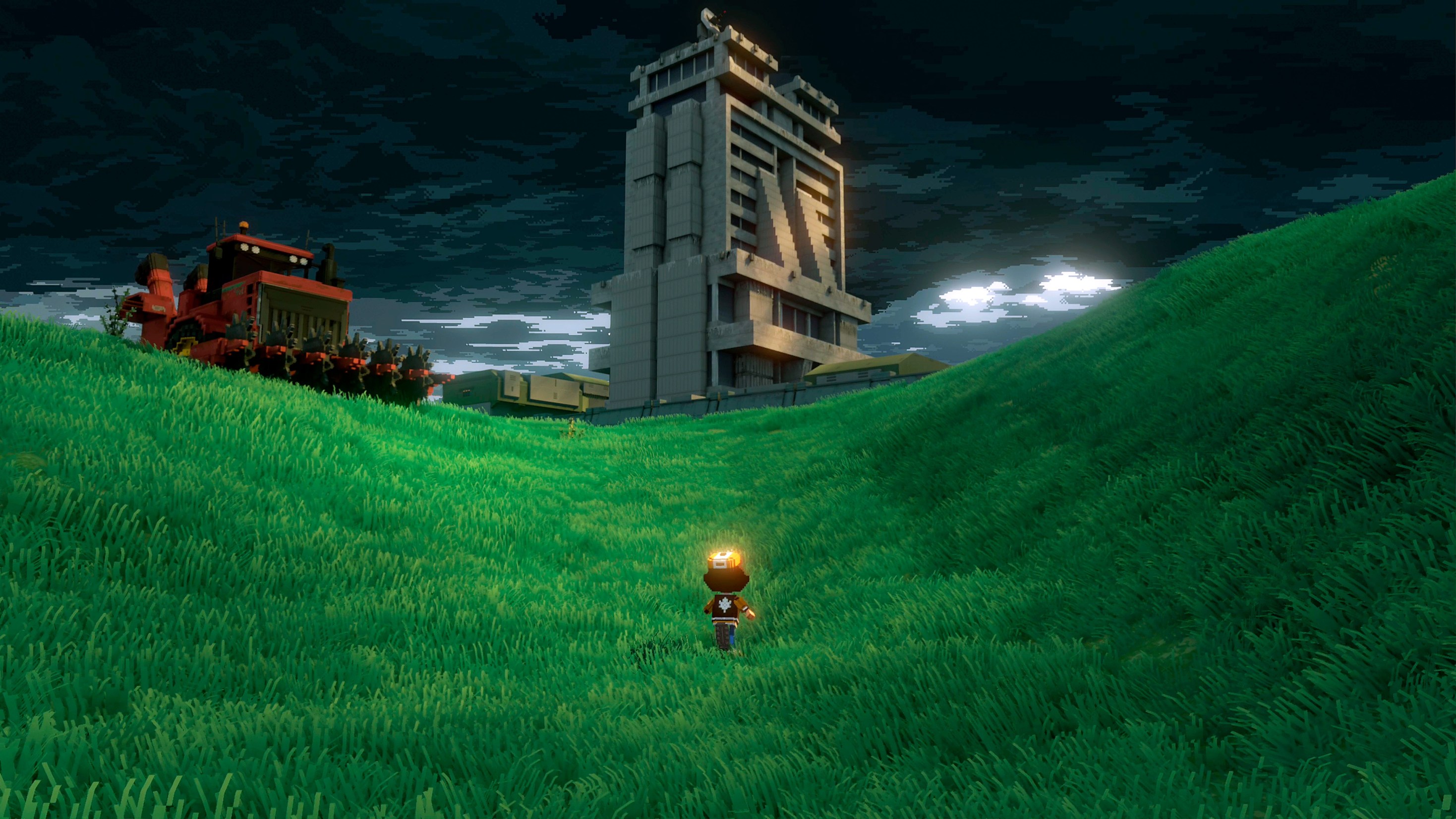 One perfect example is the elevator. At one point, the player needs access to the elevator to move on. But the guy in control of the machine wont let you unless you get him a souvenir of something. He suggests a picture using a camera. From the start of the game, the player talks with their friends about how theyre making an amateur movie and that one friend has the camera equipment. Like any normal person, I assume thats the camera I need. But after ramming my head against the wall for a good while, I stumbled into the actual answer: give green paint to an old homeless woman, so she can make a painting and to use the painting as the souvenir instead.

This issue is expanded further with the lack of knowing whats part of the main story or not. Numerous times Id follow down a chain of fetch quests, thinking itll progress the story, only to discover that the final reward was another comic book (how you learn new attacks). Sometimes these attacks were for side characters I havent even unlocked yet. And with my established distaste for learning new attacks, I was often left unsatisfied by the end of these quest lines. 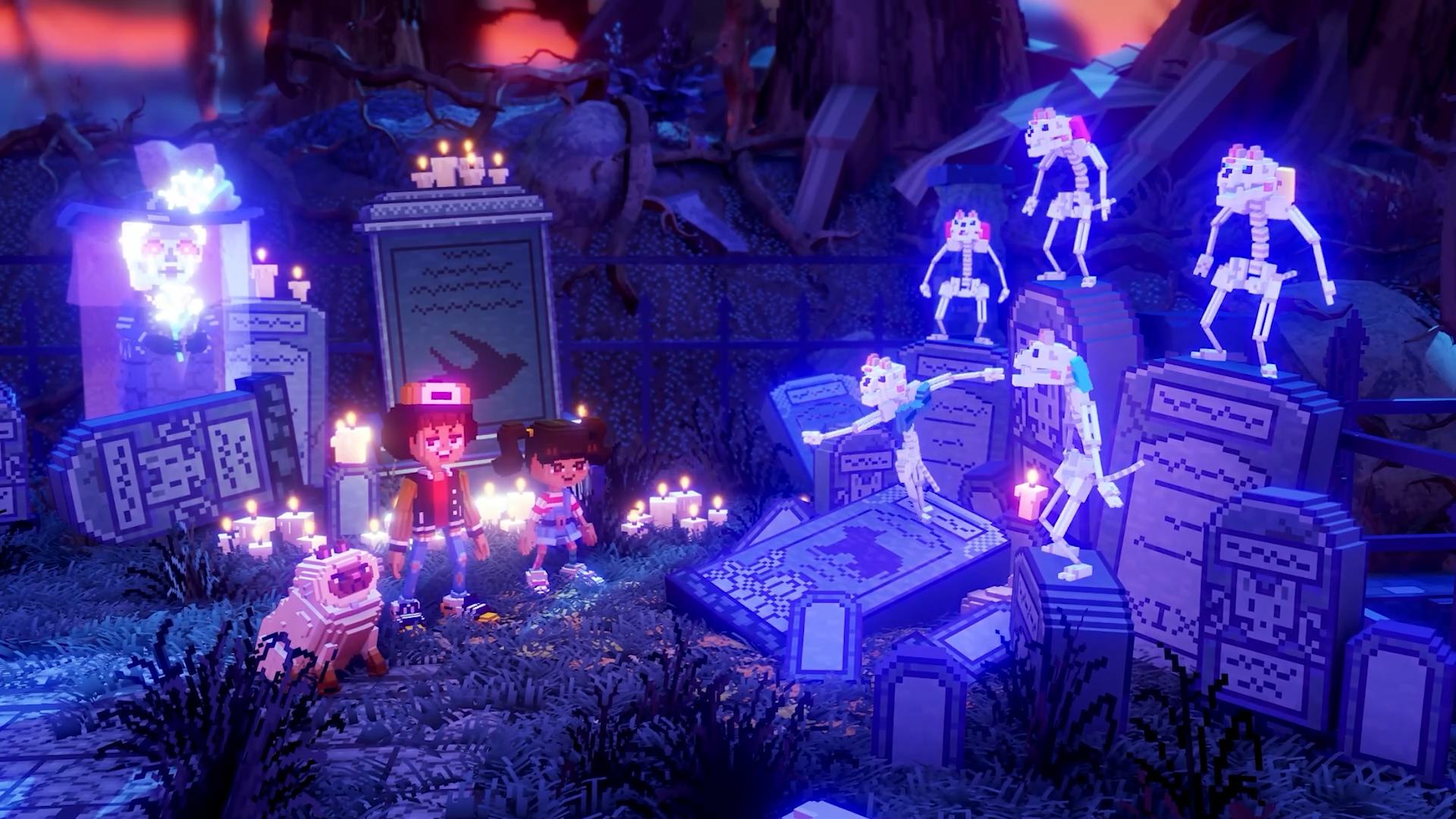 Thats to assume there even was an end, mind you. A handful of dialogue or situations would actually result in a complete lack of resolution. The local school is haunted by a powerful ghost of a prom queen, whom you encounter only once. Theres a squirrel in the forest asking for a nut. Theres some kind of mystical writer, willingly trapped in an altar of some kind. And theres a giant worm monster over by the train tracks. Dont ask me how each of those stories end, though. Because they dont. The prom ghost is still there, I never found a nut, the writer just stands there, and the origin of the worm is never expanded on, or even mentioned. Echo Generation is riddled with a mess of loose ends, worsened by the unpredictable nature of the item issue mentioned before.

The main story does have a conclusion, at least. But its not an exception to the scrambled scribbles that plague the rest of the game. The main plot rapidly jumps from one wild idea to the other, not giving the time to expand or settle into one concept before jumping to the next. I went from discovering alien crash sites to fighting ghost cats in the same gameplay session. And it wasnt that long before that transitioned into breaking into a high-tech lab (after fighting the giant worm monster, of course).

All of this combined to make for a fragmented and unorganized experience. It felt like I was given multiple chunks of a game, but not given any instruction on how to connect them. And even after putting it all together, the resulting image still didn't make much sense. By the end, I was left fairly unsatisfied and a little confused. 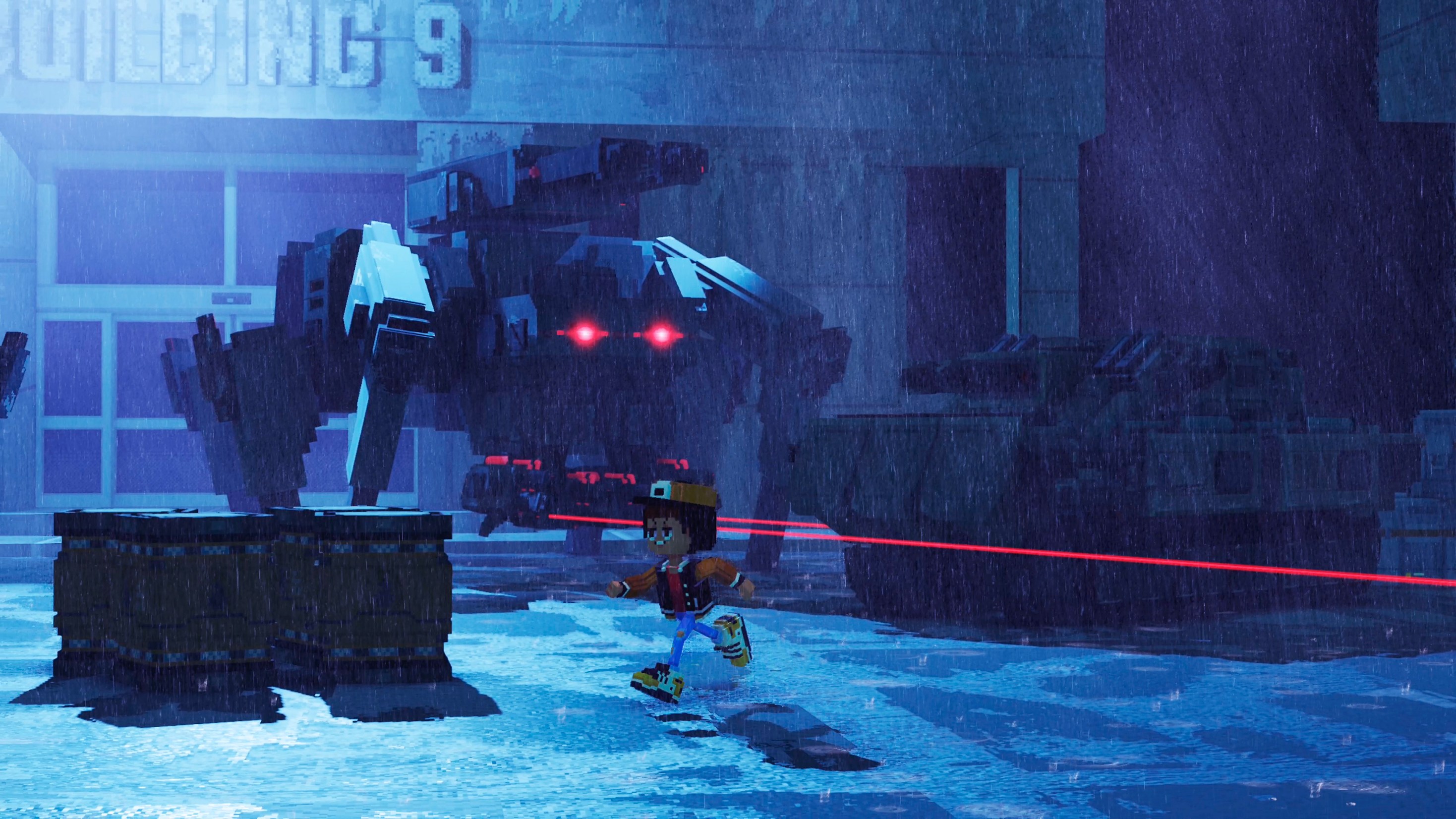 One shortcoming I did want to highlight was a lack of accessibility. There is no way to adjust text size, and no option to bypass the QTEs. As such, those hard of sight or those with fine reflex motor control difficulties will find the game very unwelcoming. I'd love to see an option to automatically succeed at the QTEs, personally.

Echo Generation has a solid foundation. Upon which, stand some top quality graphics and excellent music. But the deeper you get into it, the more obvious the irregular narrative and lack of guidance become. All in all, It was a very middle-of-the-road experience. I dont recommend it to anyone who wants a deep, rich experience or likes in-depth RPGs. It might be good for more casual and patient players, or something for your kids to play, though.

Echo Generation was developed and published by Cococucumber. Its available now on Xbox Series, Xbox One, Windows PC for $25. At the time of publication, its also available on Xbox Game Pass for PC and Console. For more information, visit the official website. A copy of the game was provided for the purpose of this review.