Grossing less than half as much than Dragalia Lost in the first 72 hours.

by LizardRock on Jul 15, 2019 @ 09:48 AM (Staff Bios)
Comment(s)
Generally speaking, when Nintendo releases a mobile game, it always has a fair degree of success. Three of their games grossed over a million each on the first three days of release. But their most recent venture, Dr. Mario World, is falling flatter than ever. It's actually their worst game yet.

According to data from info company Sensor Tower, reported on by James Batchelor, Dr. Mario World as grossed the lowest amount of money of every Nintendo App so far. The app grossed around $100,000 in its first 72 hours. Compared to games like Fire Emblem Heroes, which grossed $11 million in the same amount of time. It's even less than Nintendo's less popular mobile IP, Dragalia Lost, which still grossed $250,000 in that time, despite Dr. Mario World having over six times as many game installations. 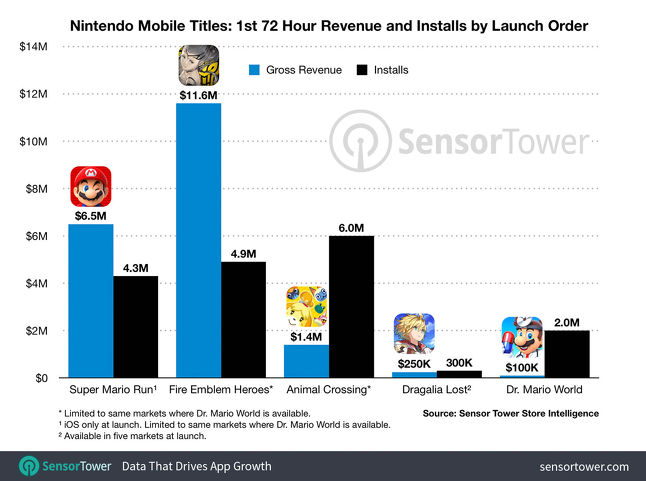 One potential reason for this is the different take on monetization the game takes compared to other titles. In Super Mario World, you are given access to one world for free, with the remainder of the game unlocked with a $9.99 purchase. Fire Emblem Heroes uses a loot-box-like method of using a premium currency to unlock new fighters.

Dr. Mario World, however, has a more traditional approach to microtransactions. The player drains hearts by playing levels, and can either wait for them to recharge to continue or purchase additional hearts with a premium currency. The player can also use special, stage-helping powers using this currency.

I've played Dr. Mario World, and I get it. The game is a bit too reminiscent of your average mobile puzzle game. It felt like I was playing a game with all of the drudges of Candy Crush, without any of the magic of Dr. Mario.

Meanwhile, Nintendo is busy working on their other mobile game, Mario Kart Tour. It had a closed Beta not long ago, which gave us a look at how the game will work and how it will be monetized. It appears to use the same system as Fire Emblem Heroes, where a special currency will unlock a randomized driver, kart, or glider.

Ubisoft CEO Vows to Change Now That They've Been Caught

This just keeps getting less and less okay.

Someone Hacked 1.5k Roblox Accounts to Campaign for Trump's Reelection

Crucible, Which was Launched, Did So Badly it's Un-Launching

That's what the kids call an "oof"

No relation to the Bridge in PUBG.