I really want to love this game, dammit.

by pocru on Sep 12, 2020 @ 07:30 PM (Staff Bios)
Comment(s)
I'm going to spend the next thousand-plus words cussing out some very personal stuff. It's gonna go to some dark places, and we're going to examine the most fundamental parts of who I am, both as a gamer and a human being. So if you’re not ready to dive headfirst into the psyche of another human being asking the hard questions, maybe this article isn’t for you.

But me? I feel I have to do this. I have to take this journey. I have to determine, once and for all, with every tool I have at my disposal… why I don’t like Crusader Kings 3.

It should be a slam dunk, a game I fall so hard into that it’s days before I realize I need to reemerge to eat and poop. It’s a real time strategy/roleplaying game, and what’s more, it’s basically the perfect fusion of those genres. You play someone – anyone, really – in one of the most iconic, exciting, and transformative periods of European history, and you guide them through the tumultuous period with cunning, force, seduction, or good ol’ fashion bribery. There’s nothing you can’t do: you can start your own nudist religion. You can try to seduce your mother, then kill your inbred brother/son monstrosity before your court discovers his horrifying existence. You can blackmail yourself into one of the most hated people in the land and attempt to thwart an endless barrage of assassination attempts. You can eat the pope. Or you can try to create a new Rome, conquering every corner of Europe and using your guile and wits to keep it all together… only to watch it fall apart when your incompetent children fail to live up to your previous character’s incredibly high standards.

I tried to get into Crusader Kings 2 but was daunted by how impossible the UI and incomprehensible the mechanics were. Crusader King 3 doesn’t have that problem, though. Through a lengthy and more-or-less understandable tutorial, as well as a whole host of useful tooltips and suggested actions, you can fairly easily navigate the menus, understand what your priorities are, and utilize all the tools you have at your disposal. Crusader Kings 3 is far, far more accessible than its counterpart, and after a few hours I was more or less navigating its menus with confidence and, more importantly, with purpose: I knew what I was trying to do and I generally knew where I had to go to accomplish it. Sure, I was still randomly clicking from time to time, but there was never really a point where I felt as if I didn’t know what was going on… at least, after the tutorial was over.

So it’s an enormously free, open, and technical game with loads of options and possibilities, packed to the brim with organic storytelling moments and opportunities to define and challenge yourself, and it’s set in a historical sandbox. This should be the kind of game I skip work to play. This should be peak gaming.

And yet, every time I pick it up… I generally put it down again after an hour. And to date, I’ve yet to be gripped by that intense “one more turn” yearning that has snagged me for games like Total War: Warhammer 2, Age of Wonders: Planetfall, or even Civilization.

Now, I’m not calling Crusader Kings 3 a bad game. The reviews are overwhelmingly positive and, frankly, I remain baffled by the fact I’m not deeper in this hole than I am. The problem is clearly on my end. But if you’re unfortunate to be anything like me, then here’s the reasons I have self-diagnosed for not being in love with Crusader Kings 3, which might resonate with you.

1) The possibilities are limitless, but your actions aren’t 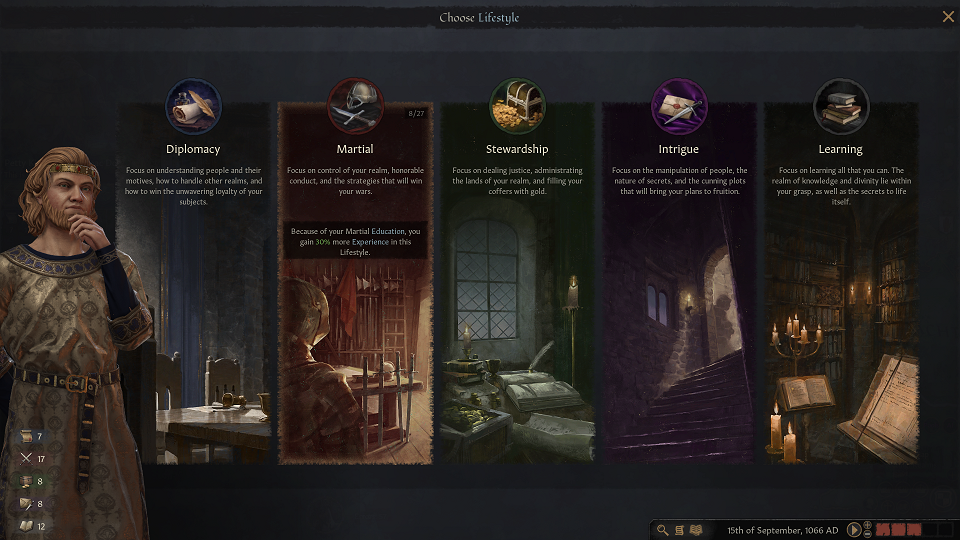 Generally speaking, you act most directly through “schemes”, which is the stuff you are actively working on at any given time. You can work on one “nice” scheme (like seduction, befriending, or romancing) and one “mean” scheme (like assassination) at the same time. But if you want to befriend multiple people at once, your options are pretty much limited to hoping those people get some random event that gives you the chance, alternating befriending schemes, or doing a lot of bribery, which is hard because when I played money was pretty much always super tight.

Sure, you can do more than that: you can instruct your counsel, a group of NPC’s that work for you, to do stuff, like convert a region to your religion or dig up another lords secrets, but once you do that it’s just a bunch of loading screens until it either works or it doesn’t. Those secrets can be traded in for “Hooks”, which basically let you bully other lords around, but I could never find interesting things to do with them. You can’t trade em’ in for cash. You can force lords to change their contracts to get a trickle of more money or troops, or to lose less money or troops, which is nice but not, like… exciting. You can force people to marry people they might not otherwise want to marry, which I’m sure has some kind of practical application but mostly I just used it to pair people I liked with people I thought were cute.

I’m told you can use hooks for things like murder schemes, so I’m sure the problem is that I’m not… trying hard enough, I guess, but, I still feel like in the moment-to-moment gameplay I’m not really doing much. I’m mostly just watching time pass, watching a small selection of schemes move forward that feel insignificant when I consider the enormous to-do list I have at any given time. My inability to charm multiple people, my extremely limited choices for fundraising, and the chaotic swirl of stuff around me leaves me feeling as if I can only put out the biggest fires, if even. And maybe that’s the point, to feel like a sock in a tumble dryer, battered around by the winds of fate and only barely able to steer yourself, but… if that’s the case, I don’t really care for it. 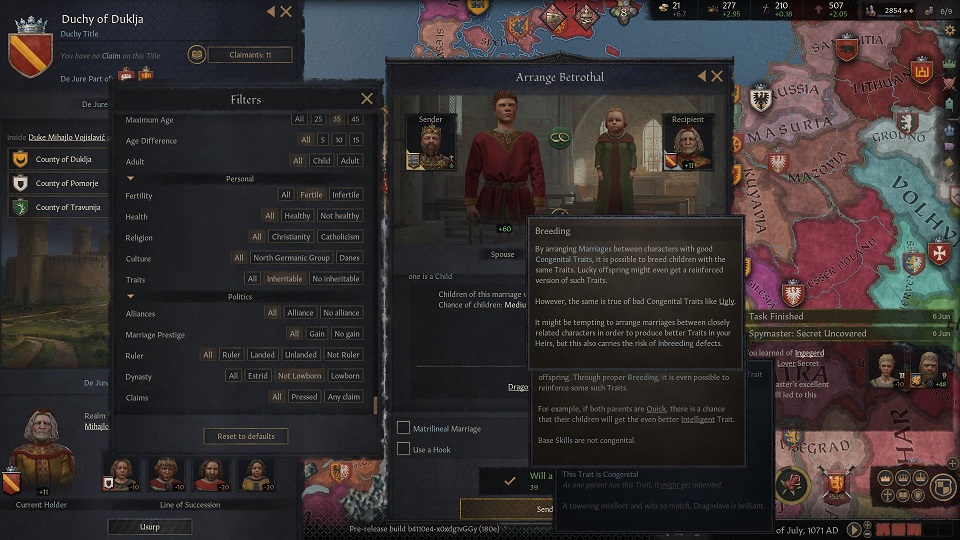 There’s a big difference between “comprehension” and “comfort”. I understand the mechanics of Crusader Kings 3, but holy crap it is still a lot to keep in mind. I can easily scan over an NPC and figure out why they don’t like me, and I can figure out more-or-less what can or can’t be done about it. I can suck up to them, I can bribe them, I can try to do them a favor… but there are things like “titles” that you get for owning certain territory, right? But the game doesn’t make it abundantly clear what land or accomplishment is tied to each title. Some titles like “King of Ireland” make enough sense because I know where goddamn Ireland is, but when I have the title “Dutchy of Whatever” and I need to get rid of it because having too many titles makes you look bad, I don’t know who to give it to because I can’t tell what territory the title applies to and if I give it to someone who doesn’t manage it I’ll look like a proper twit won’t it?

And like, land claims, right? I can tell easily enough who has a claim to a certain chunk of land, and I could try to manipulate stuff to get my hands on that land myself, you know? Through marriages and junk. But again, I’m not always clear what title bestows upon you what land. It doesn’t help that as you zoom in or out from the map the lands change names depending on the region they’re in or what have you, so it’s super easy to see you have the “right” to a land and stuff but it’s not always clear how you got it or what title gave you that right. I would play and I would be told by the very helpful manager tool that I could declare war on someone because they were squatting in land I could claim was my own, and I had no idea – not the faintest inkling – as to how I got that right. I just sorta did. Which was nice, don’t get me wrong, but it felt more like a weird accident than the intentional manipulation of a cunning lord. 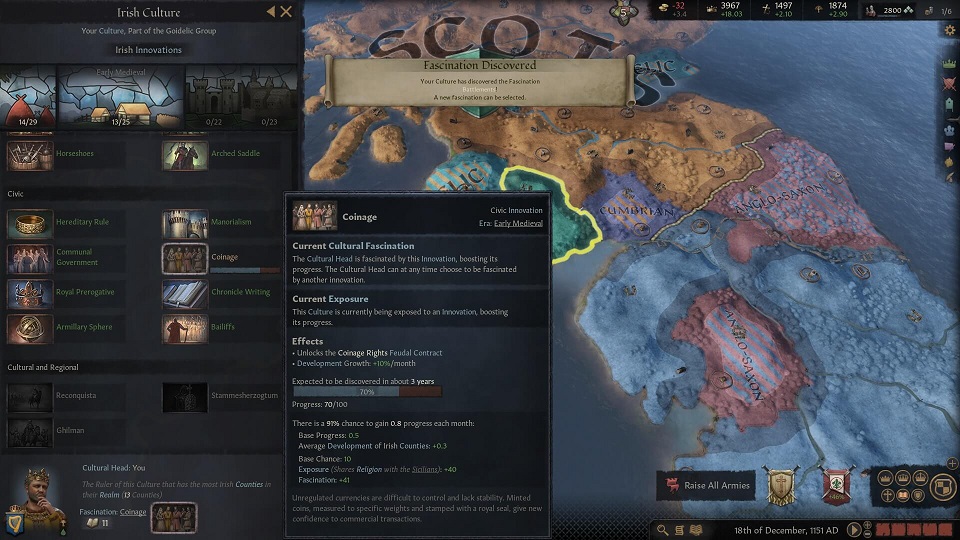 If you wanted to be really generous, I guess you could say I’m too dumb to “get” Crusader Kings 3. Or maybe I need to pay more attention? Or maybe I need to spend more time with it? Watch more tutorials? I don’t know what else Crusader King 3 expects of me to enjoy it fully, but right now I’m not entirely sure I’m willing to pay that price. Maybe if I fall into a huge glut of free time, but right now? That’s a no go.

Don’t let me stop you from trying it yourself, I just… I just can’t.