Vacation Simulator Review: It Got Even Better

Vacation is better than Job, what a surprise.

by LizardRock on May 02, 2019 @ 05:00 PM (Staff Bios)
Comment(s)
There's nothing quite as relaxing as a vacation. Escaping the dredges of modern day and visiting unique and exotic lands is a sure-fire way to rinse off the slimy saturated coating we call stress. But for many folks, making a vacation happen requires more time, money, and effort than they can afford. Thankfully, there's Owlchemy's newest virtual reality title here to give you the best of the human experience. It's Vacation Simulator!

Vacation Simulator is a VR game developed and published by Owlchemy Labs for the PC (Vive/Oculus) and PlayStation 4 (PSVR). A "sequel" to the studio's hit game Job Simulator, it places the player into the far future (2060), where humans are gone and robots have built large simulations of what they THINK life was like back in the day. In this case, it's with the tradition of vacationing!

Yes, there will be a lot of comparisons made between the two games. 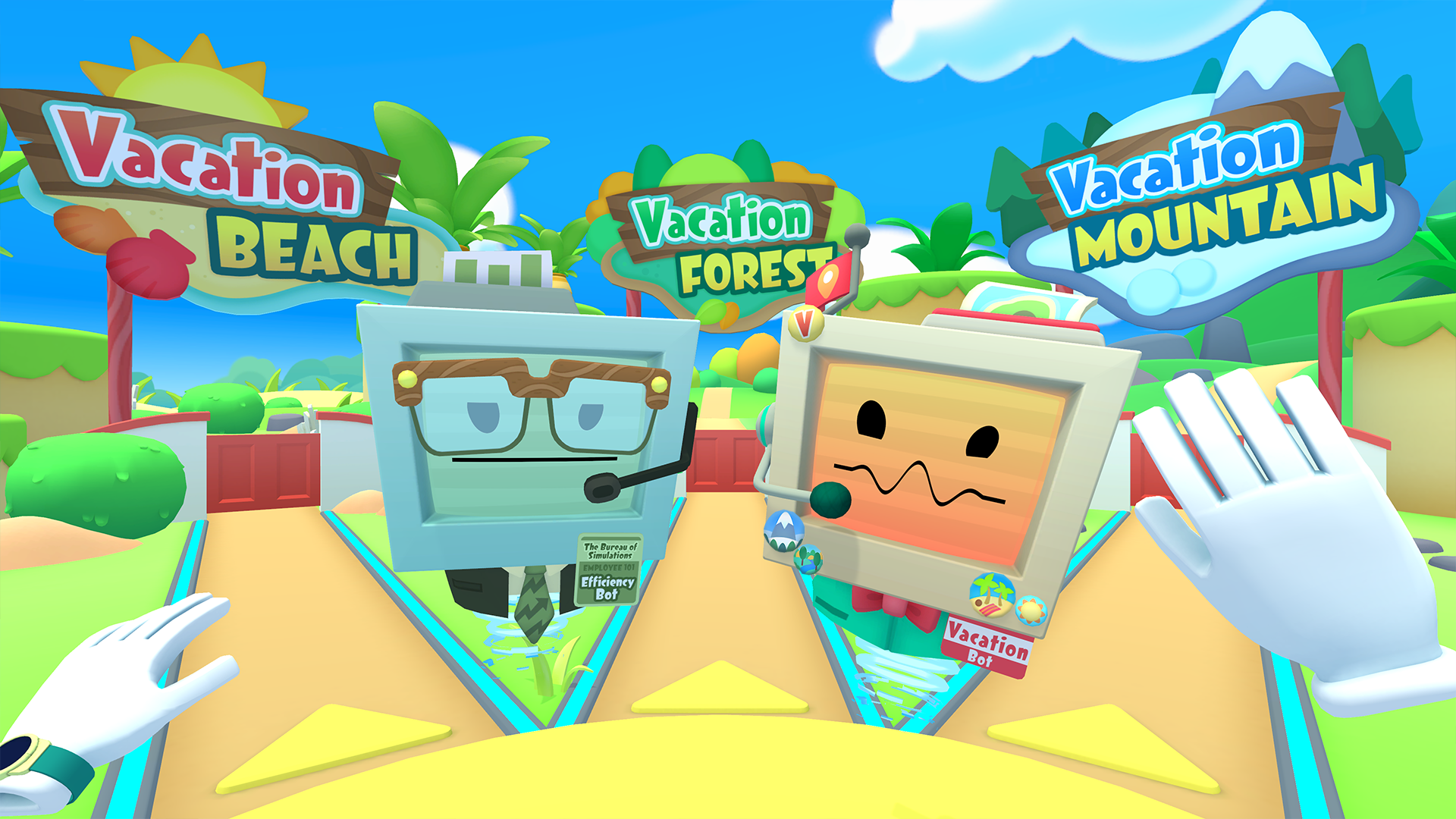 Players have four, technically three, locations they can choose from. In their personal suite, they can customize their character, store items they've collected, and enjoy in all of the most exciting aspects of a hotel room. Otherwise, they have the choice of visiting either Vacation Beach, Vacation Forest, or Vacation Mountain. Each location has its own unique stories, activities, and environments for the player to explore and interact with.

This time around, the player, affectionately named "human," is tasked with earning Memories, a currency-like reward for accomplishing certain goals and tasks while out on Vacation Island. 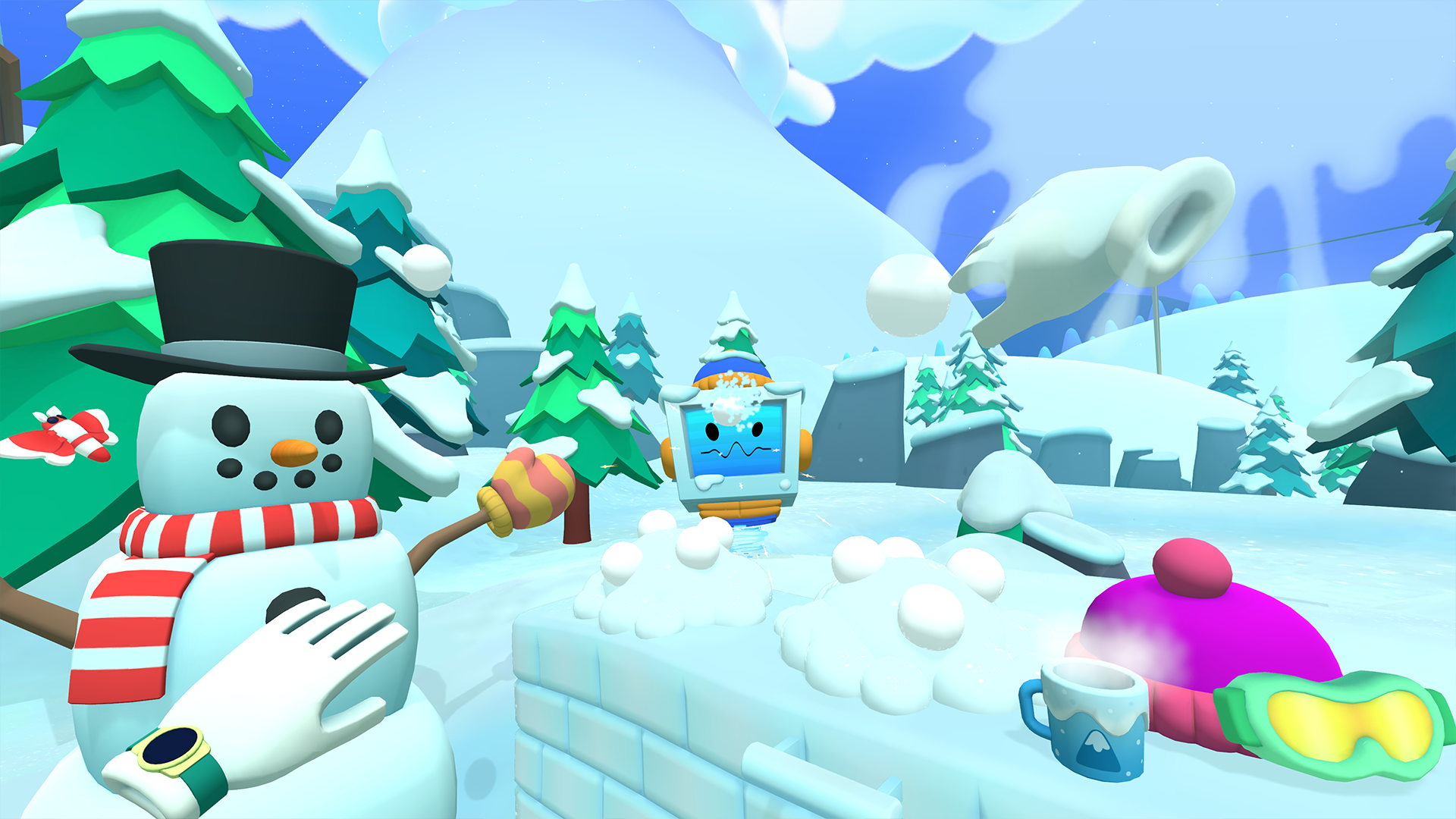 Unlike before, Vacation Simulator is all connected. The player can take items from one area and transfer it to the other using their backpack. Later challenges even require that the player deliver items between them.

The game gives an almost too-exciting first impression. Given the plethora of new features not present in the previous game, the concierge robot, Vacation Bot, will walk you through them when you play for the first time. As happy and excited I was to play the game and try out these features, I felt a bit impatient going through the tutorial process. But once that was over, I was free to explore and play at my leisure. With every step offering a number of things to do, I felt like a kid in a candy store of vacation.

Vacation Simulator is an upgrade from Job Sim in almost every way. They've taken the core concept, the warm and wholesome environments, and the incredibly clever writing of the previous game, while adding in new features that only make the experience better.

The first improvement is with the character. The player can now customize their player's face, skin, hair, and VR visor. There's a variety of colors and styles available, allowing for a wide variety of different looking characters. One thing I noticed was the lack of any gender specifications. You didn't choose a boy or girl, you just stylized yourself the way YOU wanted. It's a small way to be very inclusive, and I appreciated that.

Having your own physical look and style is more important now, thanks to my second favorite feature: the camera. The player can now pull out a camera and take pictures of themselves, the staff, the land, whatever they want! I loved documenting my silly outfits, giant sandwiches, and friendly wildlife encounters.

The camera, when not in use, is stored in the backpack, another new feature. If the player wants to keep an item, they no longer have to keep it in their hands the whole time. They can store a small number of object in a backpack, drawing from it at will. This system is used to bring items of particular interest back to your suite, as well as into other vacation destinations. How else would I eat a burger on a snowy mountain top?

The backpack was my #1 favorite new feature, if you were wondering. 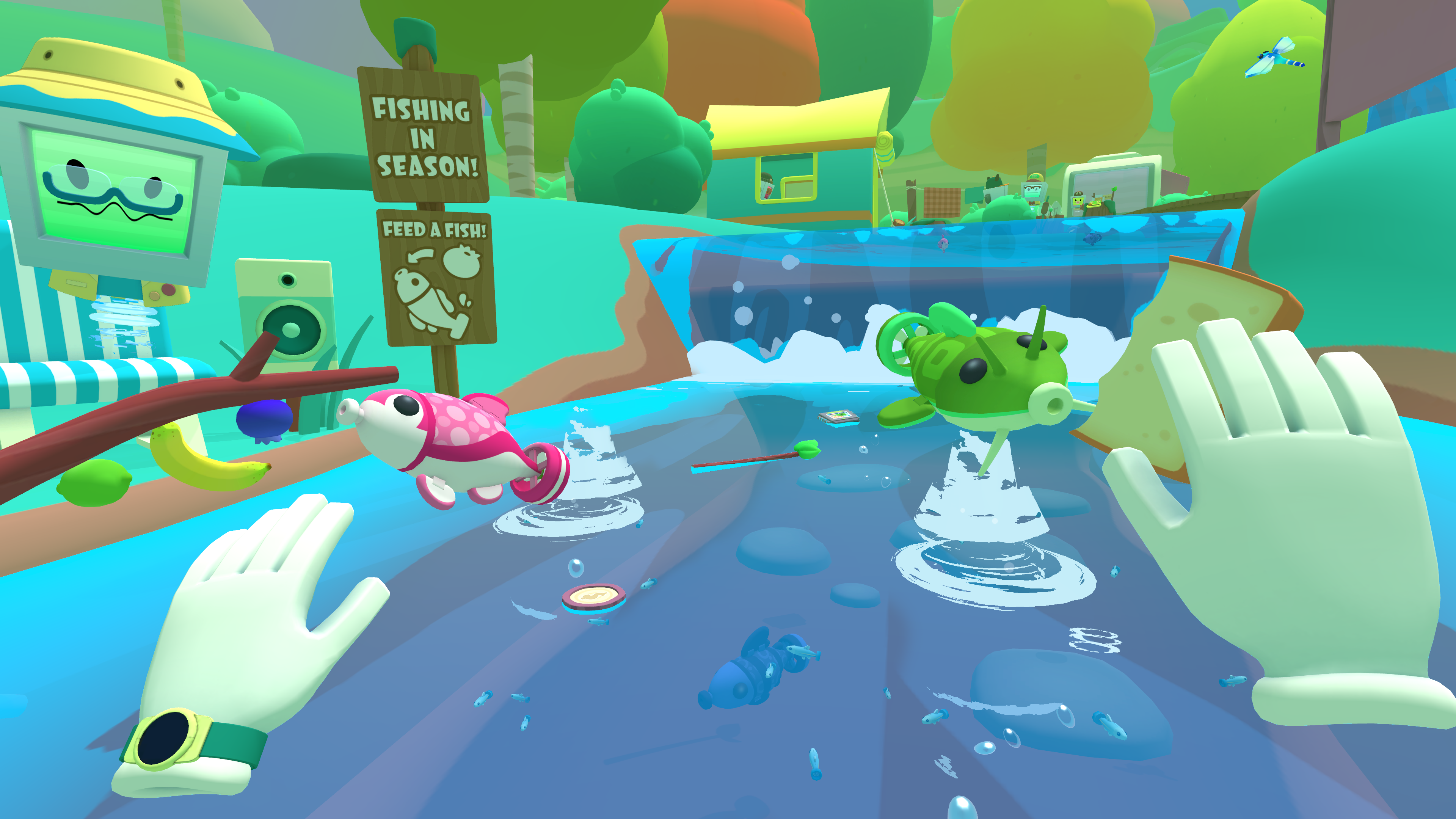 Each destination is no joke, either. In Job Sim, every job was performed in its entirety in a single location. In Vacation Simulator, the vacationing happens all over! Players can travel to several different positions around each destination, each with its own interests and activities. Had they tried to stuff all of these into a single location, it would have been crowded and overwhelming. Not to mention that every vacation spot has a special secondary location they can unlock once they have enough Memories. It was nice to be rewarded for my efforts with a cool bonus area. It all cultivates in a story, complete with a dramatic ending. To learn about that, you'll have to play for yourself.

All the while, each and every world was still full of the good vibes and witty humor of yore. If I wanted to cook a bacon cheeseburger, turn that into a smoothie, and then turn that smoothie into a piece of shrubbery, I can. The campfire robots will still tell incredibly charming stories of scary computer sounds. The radio will play funny-yet-funky music with hilarious ads in between. The fish even make kissy noises when you put them up to your face! None of that charm is lost here.

I was laughing like a fiend after using a slingshot item to launch a fish into the horizon. That's an experience that everyone should enjoy in their life and I'm almost upset it took this long to happen.

The Simulator series has grown significantly since its conception. Some of that growth came with growing pains, as well. There were a few flaws I noticed while on my "vacation," nearly all of them what seemed like the result of expanding as much as it had. 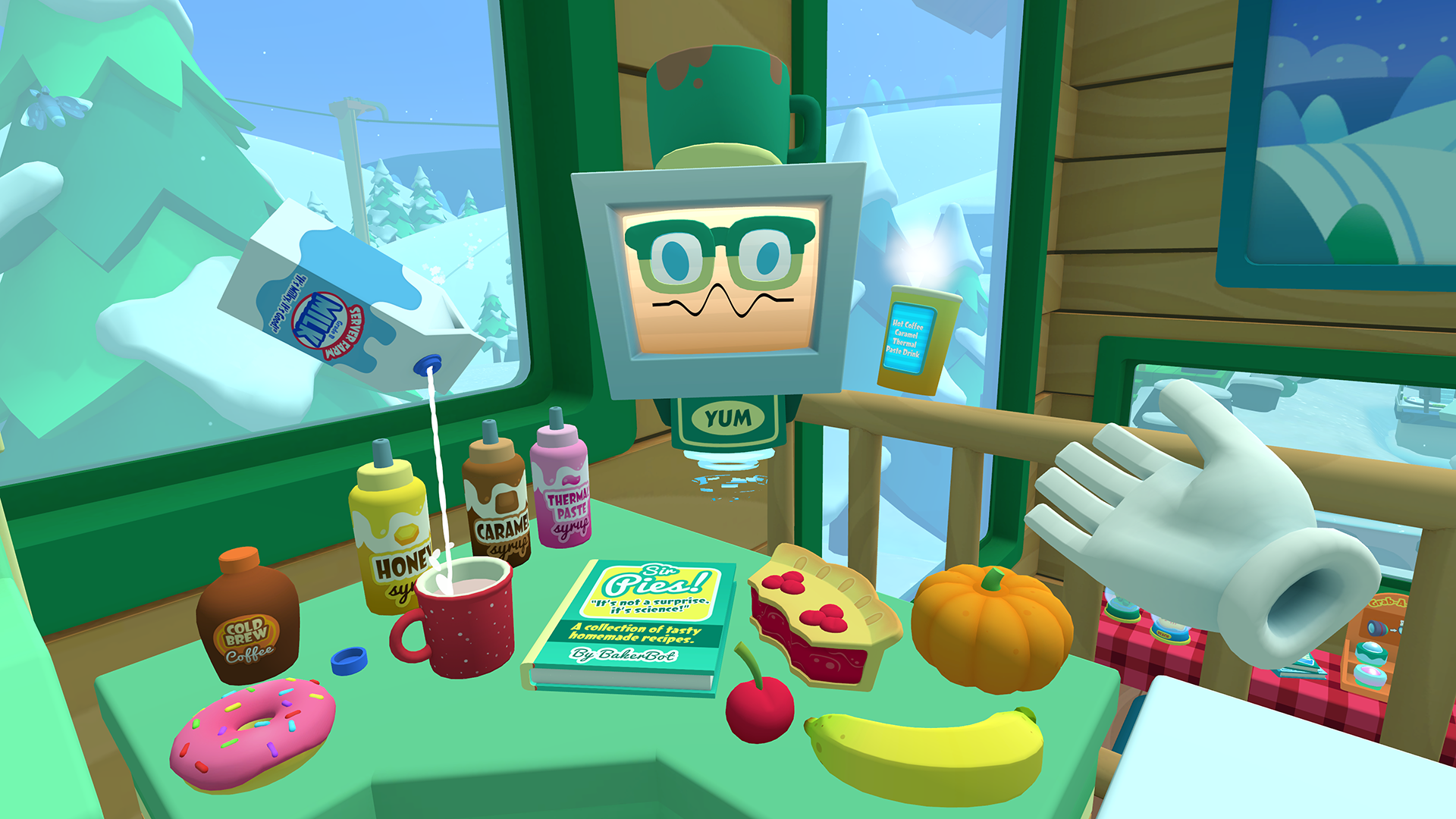 The biggest issue I felt was with the actual activities provided to you. In Job Simulator, each activity was fully and entirely unique. The activities you're given and the tools of creativity provided were all different in each segment. That's not the case here. Each of the three vacation destinations has a repeating theme as to what is available to you. Each area had a cooking station, each one had a camera kiosk, each one had a puzzle game (save the Forest, which swapped that out for a painting feature). The moth collecting, the vending machine, etc.

Sure, they weren't EXACTLY the same, offering different goals and ingredients, but the idea was the same. This made the different locations feel less special, like I was doing more of the same just under a new backdrop. By the time I had reached the last location, I had lost nearly all interest in the cooking options. I had done it twice already! 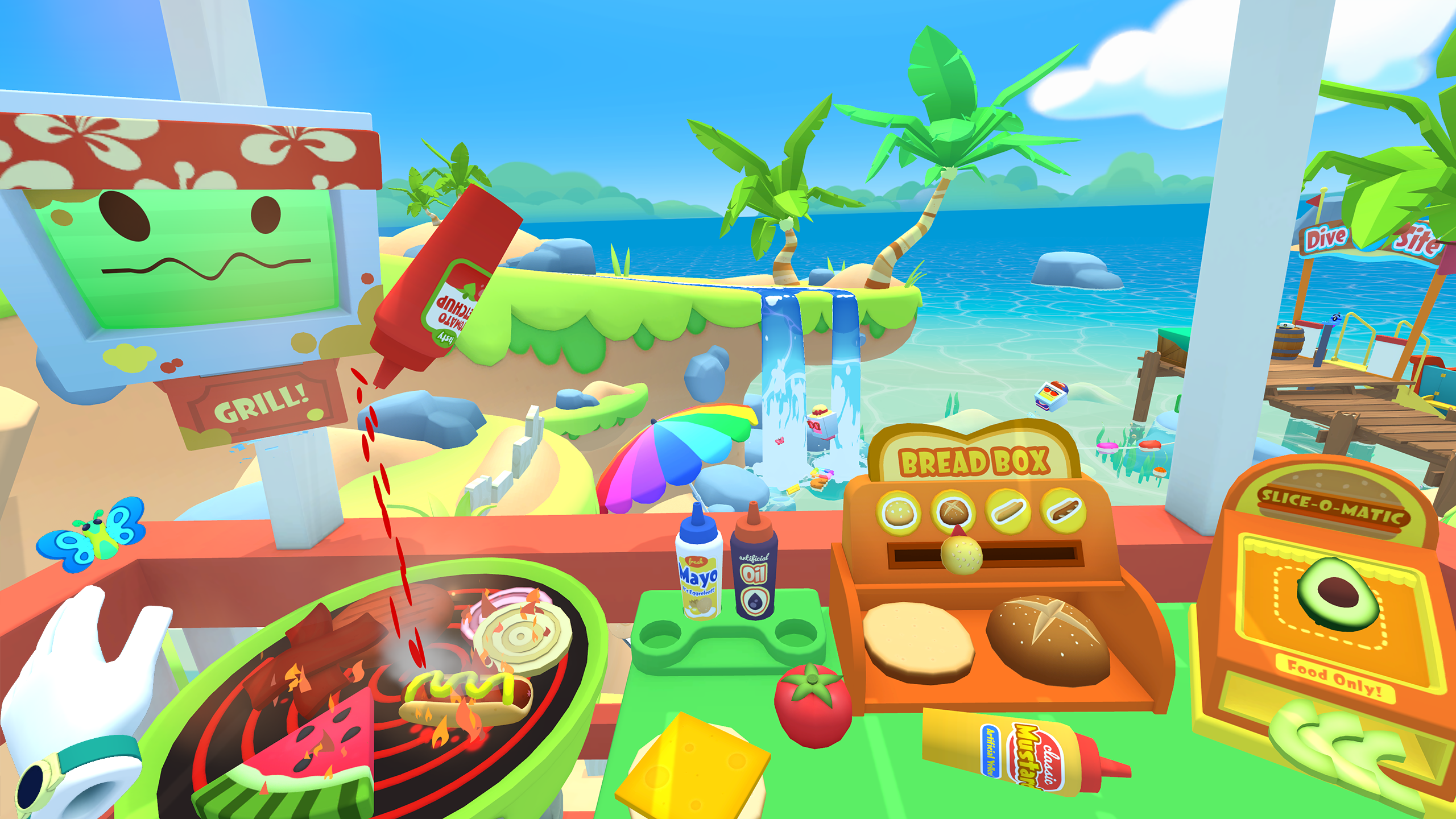 In a similar vein, the areas didn't have the same degree of importance as they once had. Earlier I praised the expanded areas for not crowding the player. But in doing so, they managed to separate all of the interesting aspects of each zone. Maybe if there wasn't the repetition I previously mentioned, it would feel fuller. But it sometimes felt stretched out instead. This was most noticeable with the beach.

So Should You Vacation?

While there were a few minor flaws, Vacation Simulator is still a heaping helping more than the game that came before it. Not only does it retain the wonderful creative direction of Job Simulator, but it also expands on it with a bigger world with plenty more to do.

For all of this, we give it the following score:

This is the kind of quality that Owlchemy Labs is known for, for sure. If you liked Job Sim, you're gonna love this one. I recommend Vacation Simulator for anyone that has a VR system. Don't you deserve to go on vacation every once and awhile?

Vacation Simulator is available on Steam VR, Oculus, and PlayStation 4 for $29.99. For more information, and where to buy, visit the game's official website. A copy of the game was provided for the purpose of this review.