by LizardRock on Dec 17, 2019 @ 12:19 PM (Staff Bios)
Comment(s)
One of the best things about video games is their ability to take unexcited tasks and ideas and make them fun. The success of games like Truck Simulator and Harvest Moon are perfect examples of this. And then there's Tools Up!.

Tools Up! is a multiplayer home repair game developed by The Knights of Unity and published by All in! Games. With a focus on couch co-op, the player is tasked with performing a variety of home repair tasks like painting, installing carpet, and building new walls. All the while, they have to deal with quirky environments, delivery mishaps, and a limited amount of time.

Often times, you really need to get deeper into a game to know what it's truly about. Mid/late game aspects can really sway one's perception of a game. That wasn't the case here. The first few levels of the game gave me a fairly clear representation of the entire game: Kinda fun, Kinda frustrating. 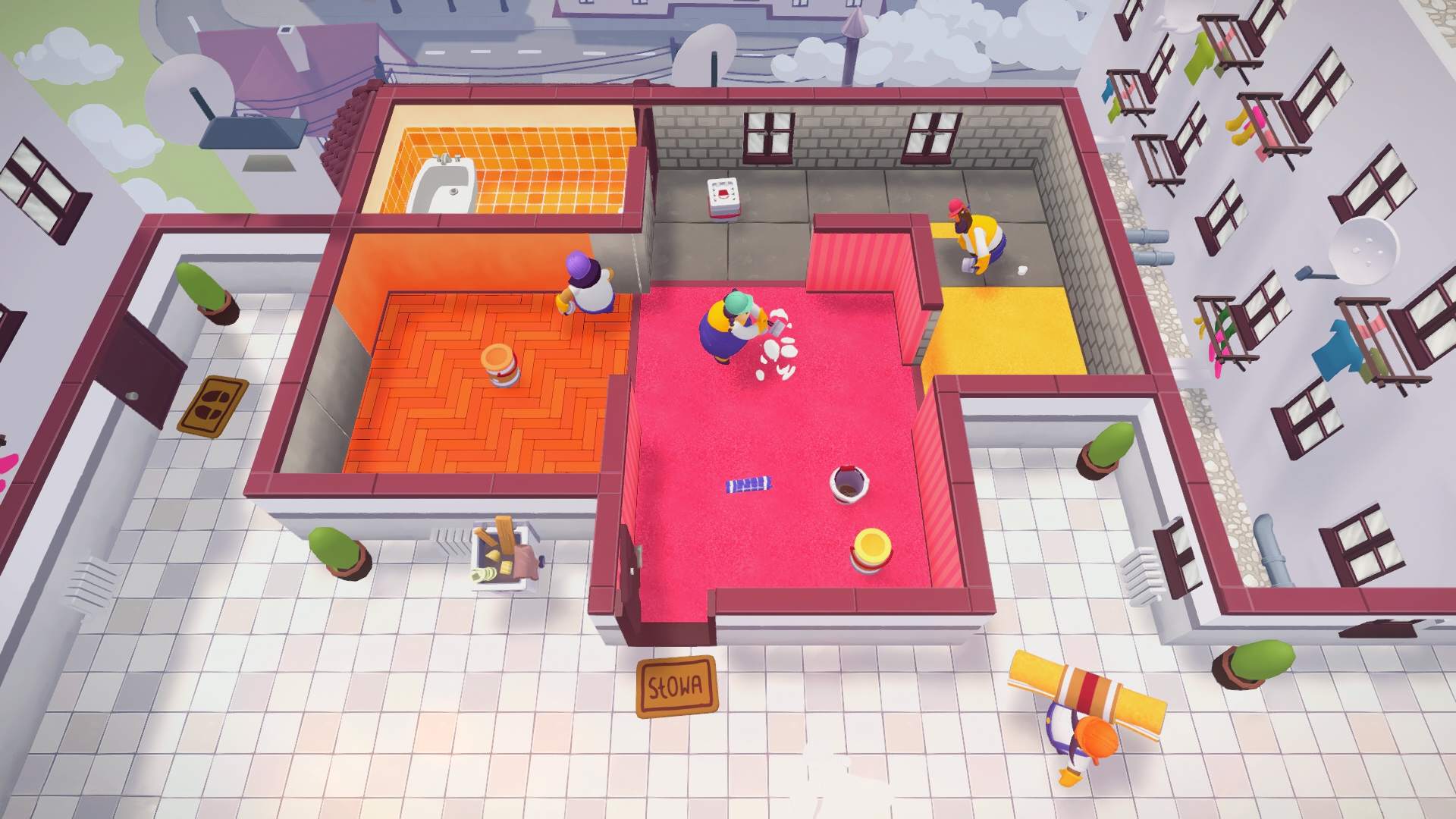 It feels like Tools Up! had clear goals and inspirations in mind in development. It wanted to be a fun and fast-paced couch co-op game. And it essentially achieved that.

Each level presented to the players was cleverly put together to make the most of teamwork. It made it relatively easy to work together with my teammate and the time limit set on each level was almost perfectly set to instill a sense of urgency without getting frustrated. 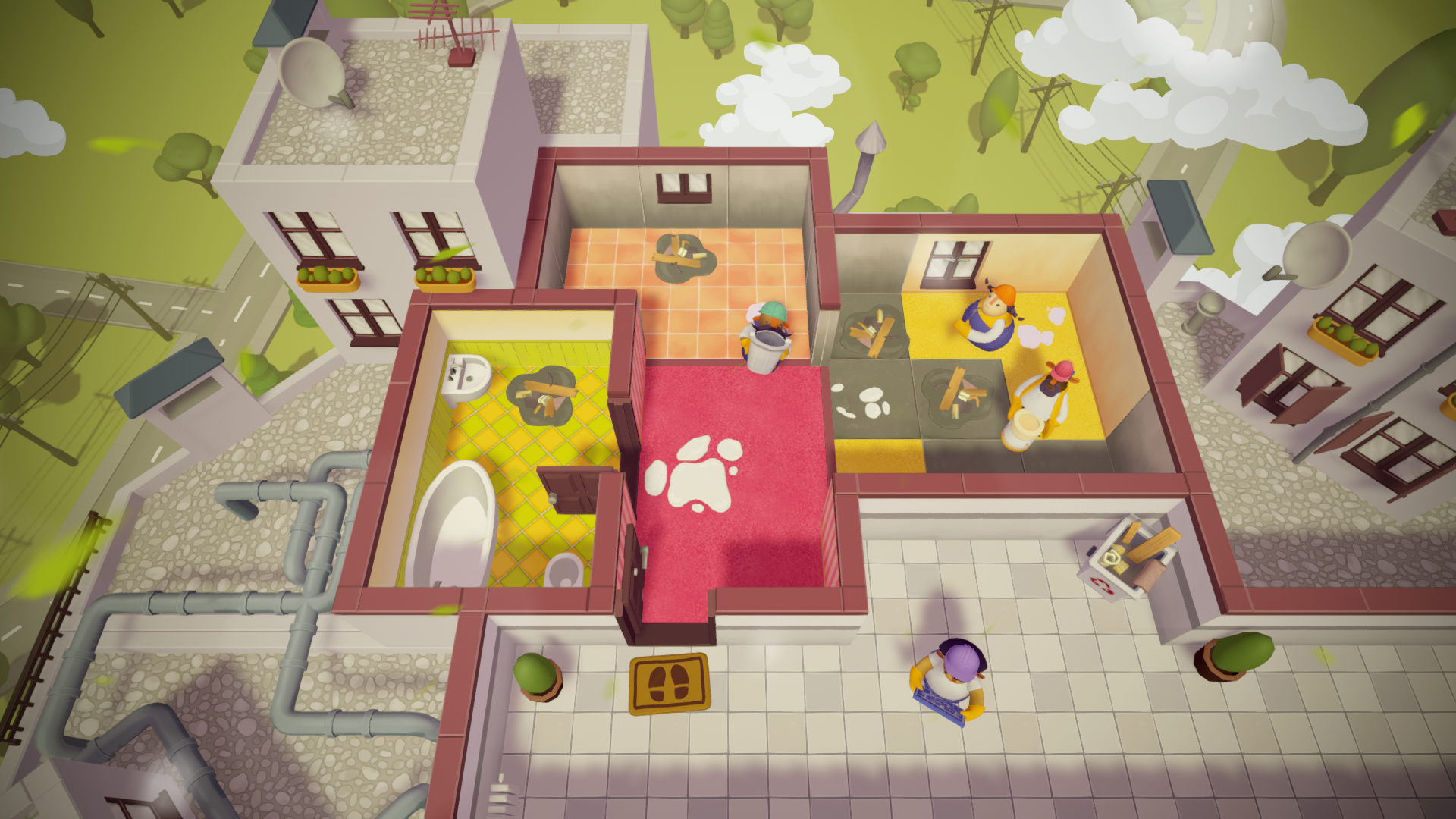 New game mechanics were introduced in a fair and timely manner, keeping things from being overwhelming too soon or repetitive by the later levels. Once I had beaten the final level, I was content.

My favorite part of the game has to be the creative aspects, however. The art perfectly represents the silly shinanigantry expected of a game like this, with interesting color schemes and character models. Seeing myself run around as a giant snail with a hard hat for a shell, painting walls and laying tile was an absolute joy. While there are other home improvement style games out there, none of them are quite like this one.

While Tools Up!'s strong points are a couple of large aspects, the bad points were the opposite. There's a sizable collection of small game mechanics and design decisions that, when stacked together, made for an often frustrating experience. 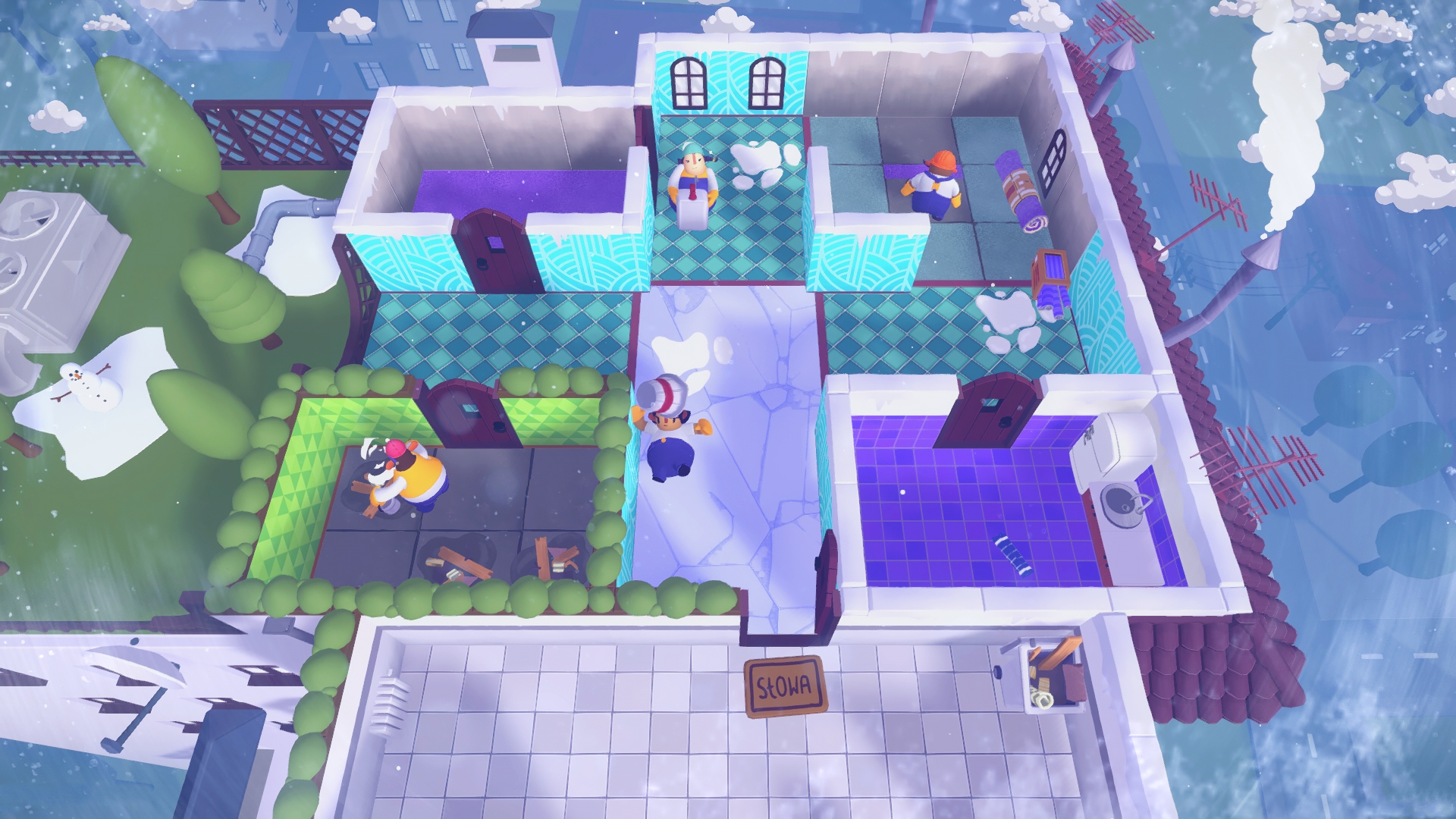 The first thing you'll likely notice is how the game aims, often unsuccessfully, to be minimalistic with its instructions. The loading screen displays the controls: X to interact, A to pick up. They assume this is enough. It was not. They don't explain that to gather paint, you HOLD X, not just press it, or that you also hold the button to apply paint to the wall. They don't tell you that you sometimes need to remove wallpaper or old flooring before you can install the new stuff. Or my favorite, that you can collect trash in the bucket to save yourself multiple trips to the trash cans.

The game also likes to introduce small gameplay features that are intended to add difficulty. Common examples are things like wallpaper glue drying up if you're not fast enough to apply the wallpaper. While intended to encourage cooperation when performing the task, all it did was irritate me when I had to walk too far for the wallpaper, only for the glue to dry. The window of time was too short for it to feel like it was my own failure. 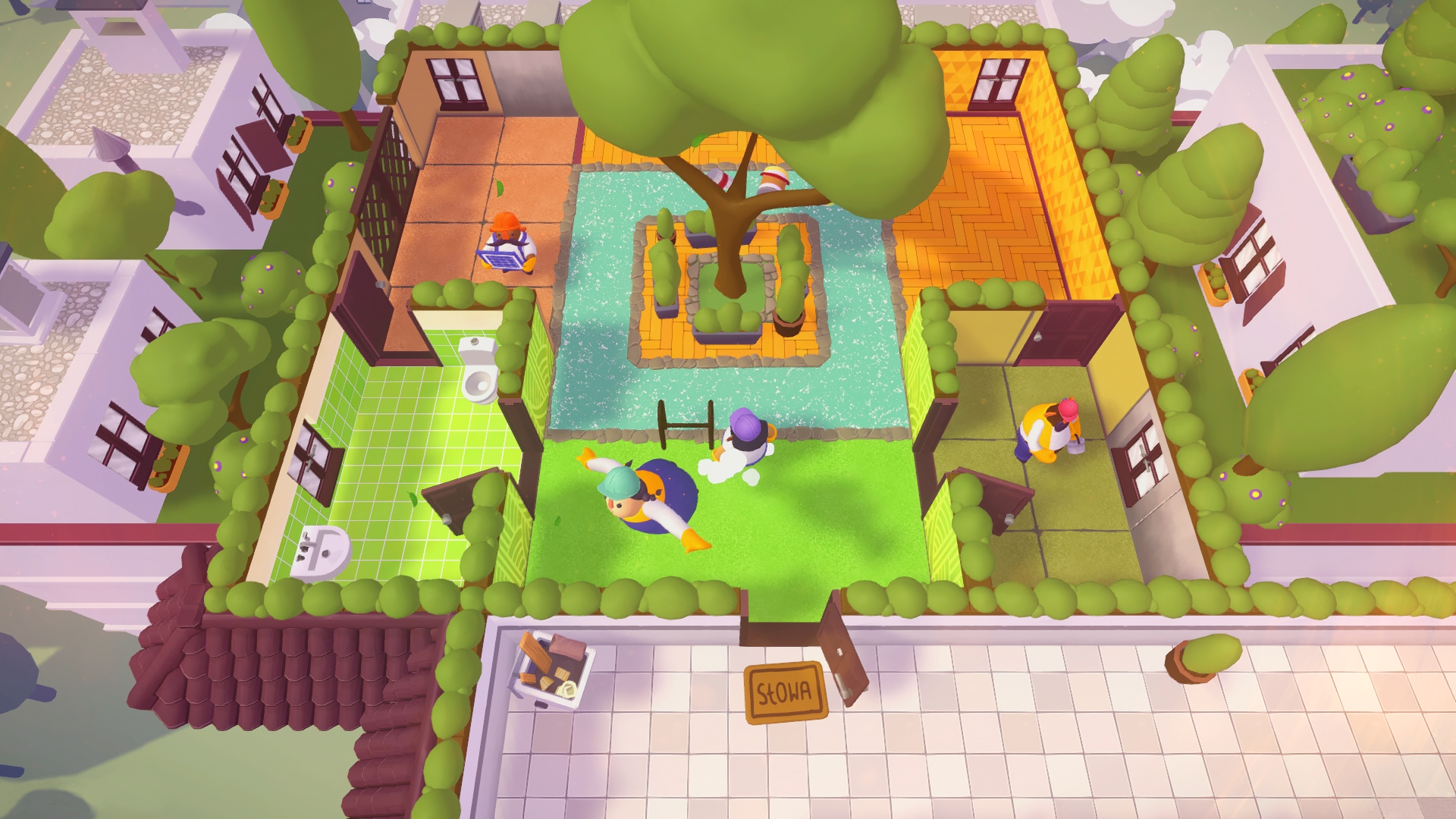 But these are small, dismissable even. They don't compare to the tremendously irritating method in which the game scores your performance. As mentioned above, each level has a time limit. In most games, a player's score would go down if they exceed this time limit. In Tools Up!, the game ends when you hit zero, and your score is determined by how much you accomplished before the timer hit. If you're completely done before then, you get the maximum score. If not you get less.

On the surface, that sounds fine. But there's one important distinction to this concept being overlooked: this isn't an endless level. The players have a set list of tasks. In every other game in the world, you'd be scored by how long it takes to complete the tasks while being given as much time as needed to finish them.

Not only does Tools Up! rob the player of a sense of completion by cutting them off at the end of the time limit, they punish the player by giving them a lower score. It did not motivate me to try again for better. I was upset that I had to redo everything I already had done for the last 10 minutes. 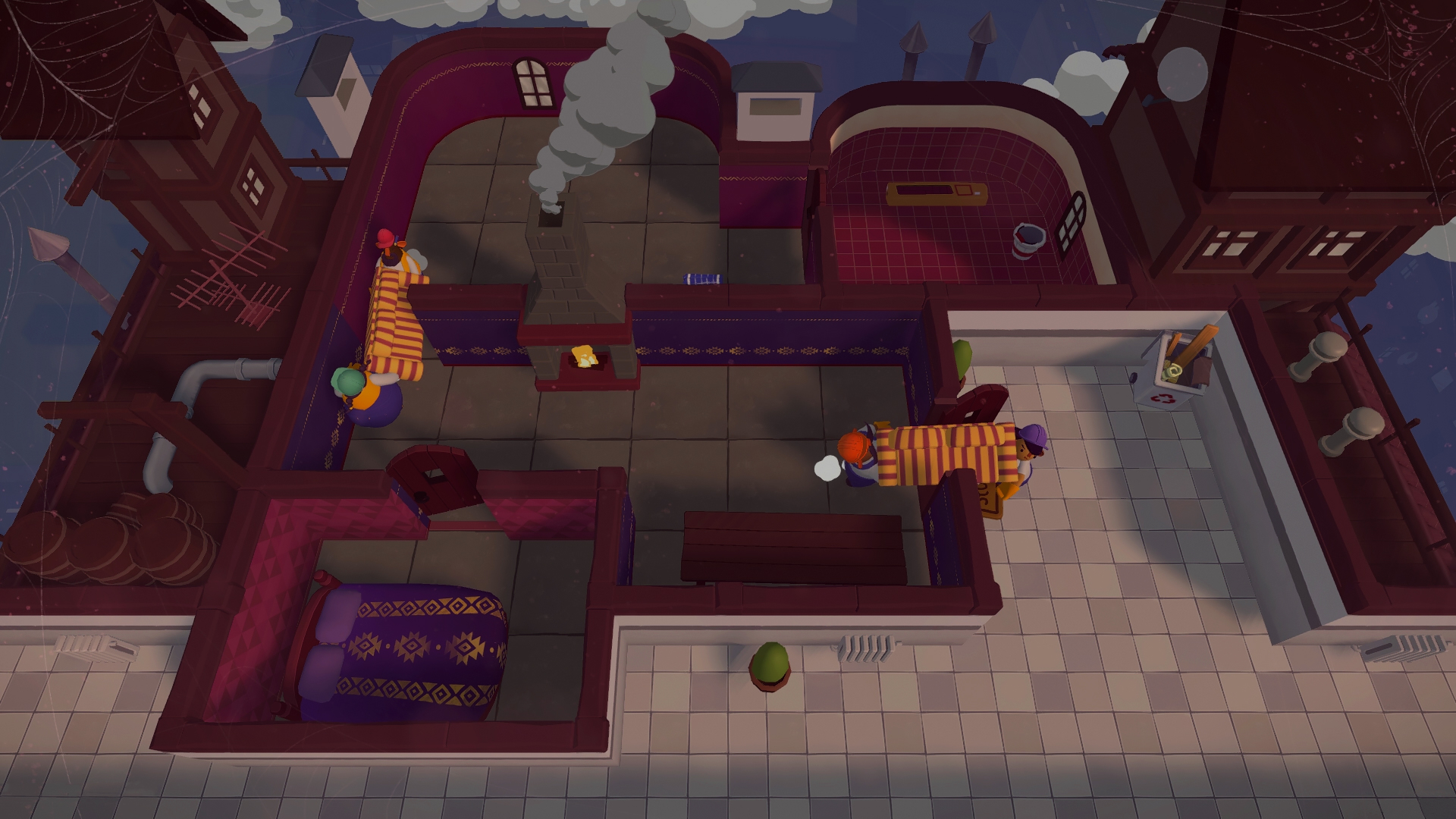 Tools Up! is a cute and creative co-op game that introduces a concept in a way I hadn't seen before. And for that, I like it. The problem is that any fun I was having was often offset by the slew of abrasive design decisions. For this reason, the game is rated as follows.

This is a perfectly average game, overall. It's hard to recommend this to people since there are better co-op games out there. But at the same time, I wouldn't actively tell someone to avoid the game. But if you do get it, be prepared for some hardships. 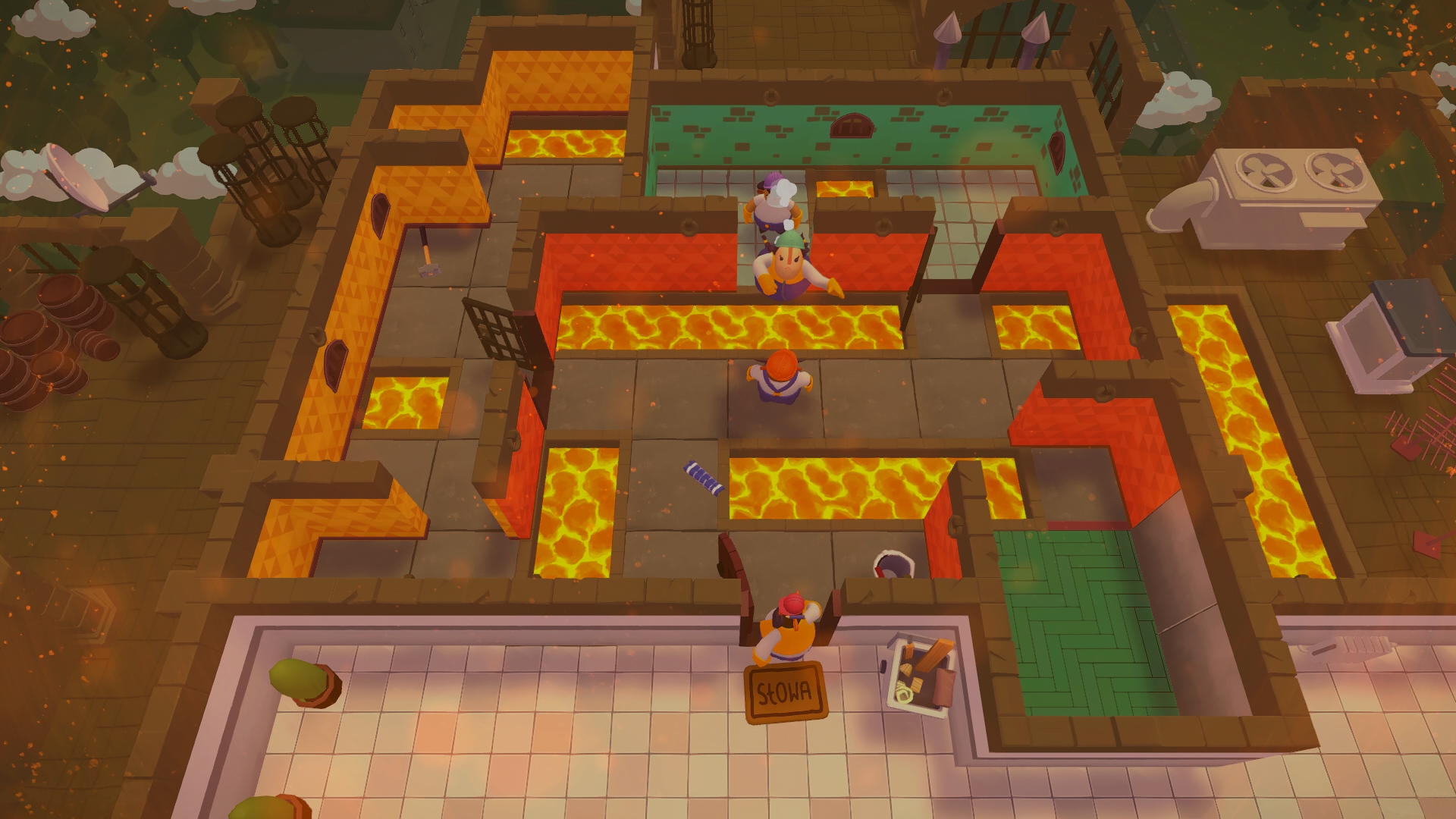 Tools Up! is developed by The Knights of Unity and published by All in! Games. It's available now on PS4, Nintendo Switch, Steam PC, and Xbox One for $19.99 USD. For more information about the game, visit the official website. A copy of this game was provided for the purpose of this review.