Even the devil sweats when these sexy beasts enter the room.

You... don't need me to tell you Hades is good, right?

If you've been even kind of adjacent to the gaming space these past few weeks you've no doubt heard about how great Hades is. It's without question the best game SuperGiant has ever made, and is quite possibly their first real "masterpiece", as it's the first of their games that has something to say both in the narrative and in the gameplay, and isn't just a really-well executed take on a particular genre or style. The reviews for it have been glowing, the conversation around it has been deep and engaging, and you've no doubt heard all about why this isometric hack-and-slash Roguelite is worth your time and attention.

So there's not a whole lot I can really add to that conversation. You don't need me to inject myself into the intellectual or cultural conversation that has spawned around this game: I'm not smart or cultured enough to contribute anything meaningful to that discussion. The story, the symbolism, the design and the mechanics, its place in the greater history of Roguelikes... all those areas are better examined by other, better journalists.

But there is one critical area of the game that has remained dangerously unexamined, and it happens to be an area I specialize in: horniness. Indeed, Hades is filled to the brim with some damn fine 2D specimens, a genuine treasure trove of waifus and husbandos waiting to be admired, coddled, and of course, ranked.

Do bear in mind that while this list is subjective, it's also coming from a professional horn-dog who's spent many years ironically (and occasionally unironically) lusting after attractive pixels, so while you can disagree with me, know that my opinion is more valid than yours. 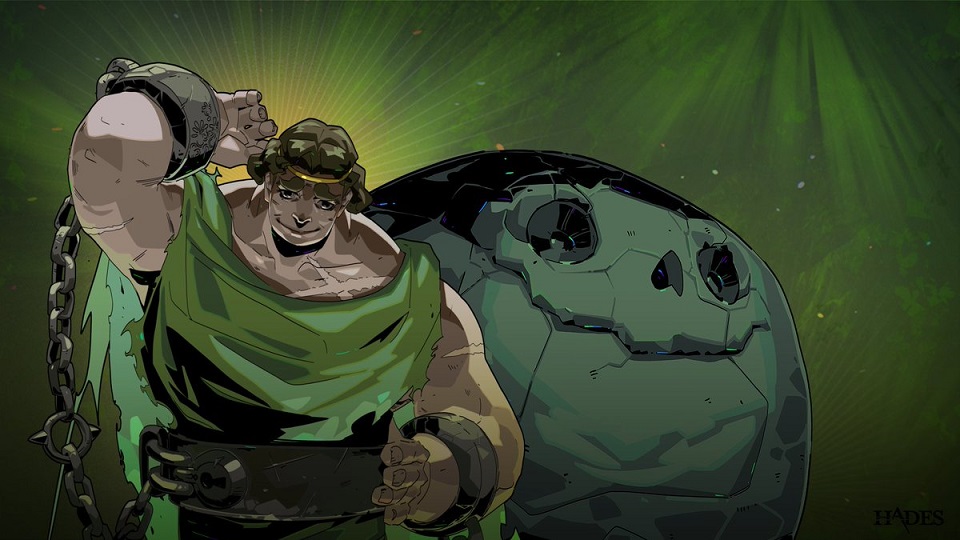 Look, there are a lot of hot guys in Hades. There's no denying that Sisyphus isn't the best looker in the bunch: in fact, from a purely physical standpoint, he's probably one of the least attractive men in the cast, behind only Hades himself and possibly Skelly.

But physicality is but one small aspect of what makes the perfect Husbando or Waifu, as we will later reiterate, and what Sisyphus lacks in raw sex appeal he makes up for in personality. Sisyphus is optimistic, wholesome, and friendly to everyone he meets, even the Fury in charge of punishing him. He gives you help whenever you need it, and he even offers you his rock if you need to vent at something.

Plus, his huge, beefy body combined with his charmed personality can only mean one thing: he must be one hell of a hugger. Sisyphus could probably hug the depression out of any living soul, and we're all worse off for the fact he's not real.

Almost all the gods in the game are hot in some form or another, but some are, of course, hotter than others. Most have been excluded from this list because while their bods are hot, their attitudes, and their penchant for trying to kill you at the slightest slight, is not. Artemis is, unfortunately, no exception when it comes to being spurned -- she's just as likely to try to impale you with her heavenly arrow if you're forced to play favorites -- but the fact that she's more distant from her family gives her a slight edge over the rest in that regard.

Plus, she's cute. Flatter her with enough nectar and she actually gets flustered, trying to distance herself in a rather sweet way. This charming inexperience with affection is actually quite logical, when you remember that she is one of the virgin goddesses and thus, is inexperienced in giving and receiving affection. You might be tempted to say that an eternal virgin would make for a bad Waifu, but I say she's a drawing, so it's not like you're going to be bedding her in any case.

Physically, Artemis is earthy and athletic: long pale-green hair in a messy braid, a sporty tunic, and long legs that... turn into weird shadow boots? Point is, while she's not the top god, she's certainly deserves the #2 spot in the god rankings.

Like Sisyphus, there are more attractive physical specimen out there than Eurydice, a tree-nymph, which guarantees she'll have wood whether you like it or not. That's not to say she's unattractive, of course: her face is pretty, with that perpetual head-tilt making her look like she's got a whole slew of sassy remarks loaded in her chamber she's too nice to unleash. She's also a colorful dresser, which makes her a breath of fresh air in the fiery realm of Asphodel.

But what makes her one of the top-tier waifus in this game isn't her looks, or even her personality, which is both kind and unabashedly earnest. No, it's the fact this lady can both cook and sing like a dream. And you should never underestimate a woman or man who's mastered both cooking and singing: they're basically the whole package.

If I had this perfect mix of artistic talent and culinary perfection walking behind me, I might be tempted to turn around myself. 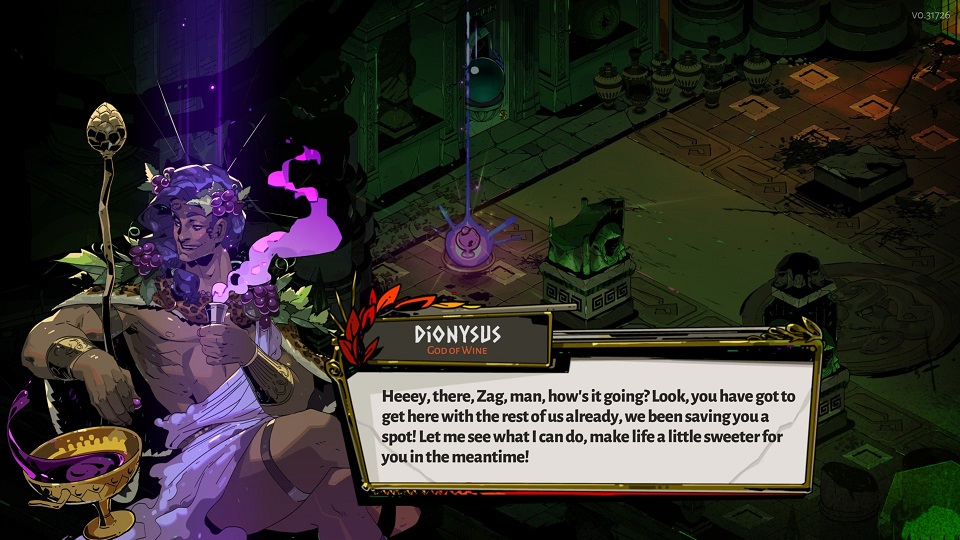 You know it. He knows it. The world knows it. That dude pulls harder than a freight train and drinks deeper than Poseidon. But while some bros might use their raw sexual affinity as an excuse to lord over you, show off, or even belittle you, Dionysus is a bro, not a chad. And you get the feeling that while he's got a new lover in his arms every few minutes, he at least knows their names and laughs at their jokes before going to pound town. He's not a tender lover, but he's still personable. And he's not finished until you are.

The fact that he's the god of wine makes him a tempting enough lover, but don't forget that bod: muscles, chocolate skin, that winning smile... he's got more than wine for you to drink in I'll tell you that much.

I want Megaera to step on me.

I'm normally a "cuddles and have an open emotional discourse" kinda guy, who prefers it soft and loving and affectionate. But I want Megaera to tell me I'm a nasty little creature while she destroys my back with that whip of hers. She's the personification of the dom: she's in control, she's confident, she's a little playful, and that voice. That VOICE. Megaera is voiced by Supergiant's own Avalon Penrose, and she's managed to turn an otherwise generic blue woman with big hair into something charged with such raw sexual energy it makes me shiver.

I would pay money -- real-world money -- for an ASPR starring Megaera. And the minute you hear her voice in-game too, you'll know what I mean.

I'm getting carried away on the voice. Megaera has other appealing aspects too. She's confident, like I said, she's driven, not bad on the eyes, has a weird respect for the main character that turns into a... not "friendly" rivalry, but a respectable one. It's actually kind of heartbreaking she's so easy to beat, I've never lost to her once, and it kind of undermines her appeal when she's the one getting stepped on, repeatedly and mercilessly.

...but who am I kidding, that voice is still the main reason she's this high up. 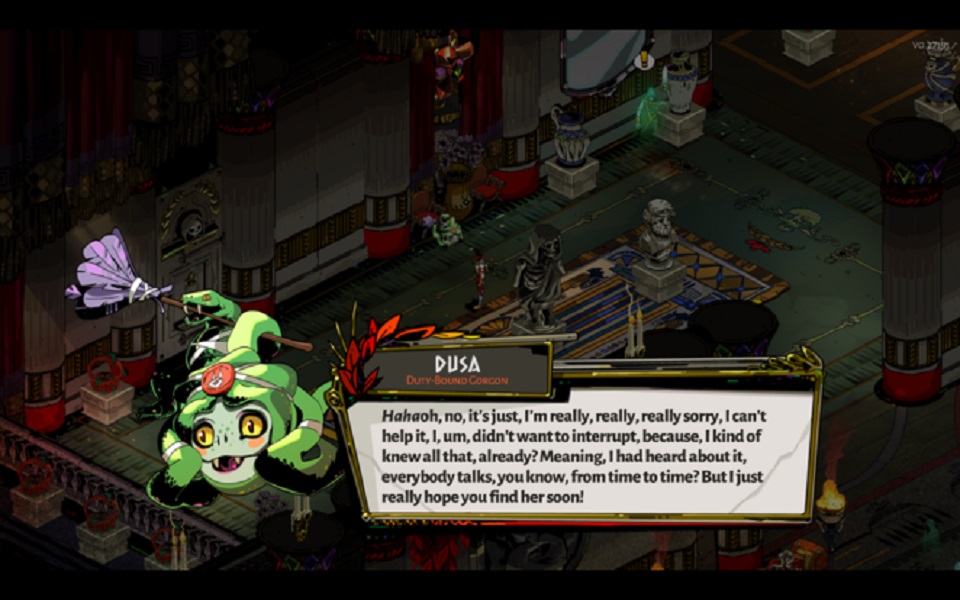 Remember what I said about bodies near the top of this article? Yeah, Dusa's why.

But you know what, she's just really darn cute. And I don't just mean physically, with her perpetually blushing cheeks, striking amber eyes, and the way her head-noodle is always holding a brush. I mean her entire personality drips with charm: she's flustered, she's overworked, but she's determined and friendly with everyone she meets. She's criminally shy yet bold with her admittedly limited ambitions, and she's just... bursting with personality with every stuttered word and flustered apology.

Maybe it's just because I'm a type and she's a type and we match. But the fact that this floating monster head is romanceable is proof enough that there are some other cultured people out there who can look past a Waifu's lack of lower body and fall in love with her adorabkle laugh.

But even she can't claim the top spot. Indeed, the sexiest character in Hades is none other than... 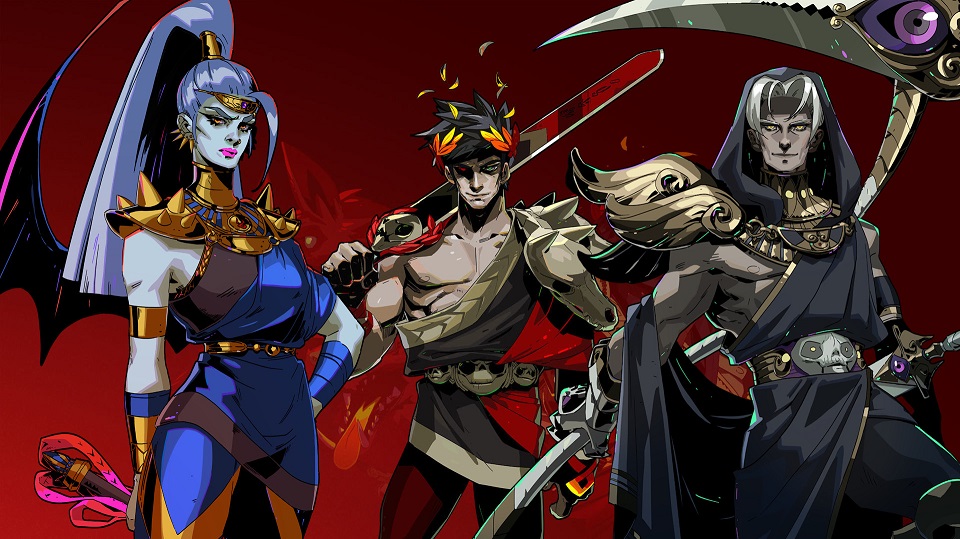 There's no two ways about it. You're the sexiest MF in the room, Zag.

You've got the body. You've got the face. You've got the wit tempered by genuine tenderness and affection for those around you. You've even got the daddy issues. Zagreus is a dream boat through and through, a guy who'll literally go through hell and back to make the people he cares about smile: and what could be sexier than that?

Other than his abs, I mean. And that hair. And those eyes.

It's not often you play your own husbando in a video game -- generally they're the avatar by which you interact with your chosen woman or man. But with Zag? It just might be the other way around: you find characters most like you just to see how this beautiful babe might talk to you, if he were real, you were in hell, and he was giving you the time of day.

You get it. If you played, you get it.

From reveal to release in under a year.

Just can't keep us away.

Grounded Gets the Shroom and Doom Update Here Soon - E3 2021

Only available if your parents hated you.