No, this has nothing to do with E3.

by pocru on Jun 13, 2021 @ 04:24 AM (Staff Bios)
Comment(s)
Another day, another indie studio put out a deckbuilding roguelike, which means I bought it pretty much immediately and I’ve been playing it on and off for the past two weeks. I’ve finally put enough hours in it to justify writing up my thoughts, which is what we’re doing now. And yes, I know it’s E3, I just don’t really have much to say about it just yet. Other than maybe Elden Ring looks amazing and I'm looking forward to the new Mario + Rabbids game.

Now, generally, the reason I like roguelike deckbuilders ie because they’re… chill. Slay the Spire has been my go-to late-night game of choice for a while now, largely because they’re something I can give half my attention to while the other half is on some youtube video I have streaming on my TV. This is also probably why I’m not very good at them, but I don’t need skill when I can just keep at it and I stagger into a run that has so much good luck I can’t help but succeed. 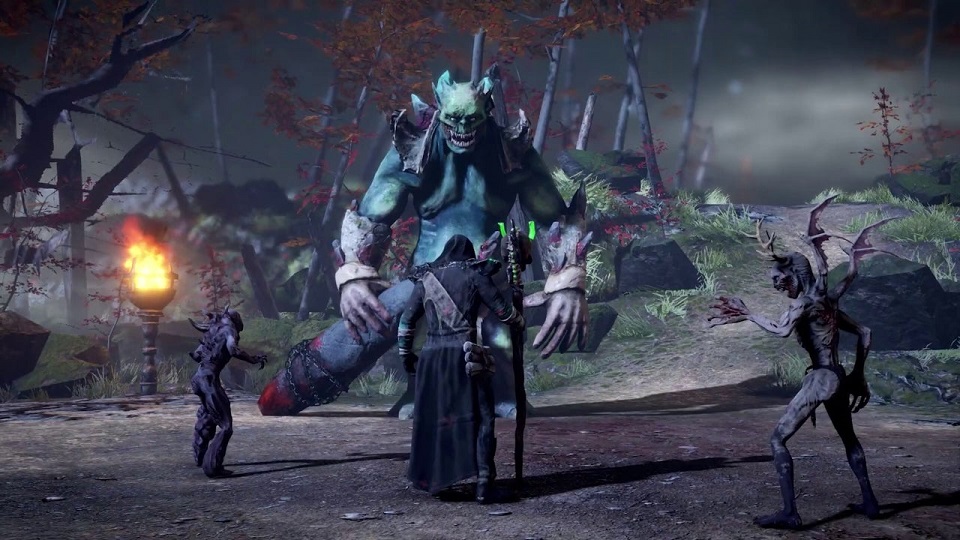 The lack of this quality is also what keeps me from sticking with certain Roguelikes I would otherwise like. Trials of Fire, a game I reviewed a while back, remains a good time, but once I unlocked every character and finished the story missions, the idea of doing runs randomly wasn’t appealing because the game required too much thinking: unlike Slay the Spire, optimizing isn’t a choice in Trials of Fire, you have to do it from the get-go in order to survive more than two encounters, and what’s more it takes a lot more thought to optimize since you’re juggling a very limited pool of resources and three distinct decks and playstyles. Likewise, Erannorth Reborn, a roguelike deckbuilder I got a few weeks ago but haven’t reviewed, has a very simple gameplay loop… that’s complicated immensely by how impossibly complicated the damn thing is. I still don’t know exactly how it all works, and while I can play it, if I’m not paying enough attention I’m going to end my run early when I accidentally use my flintlock pistol to shoot myself in the goddamn head.

Tainted Grail: Conquest, the actual subject of this review, unfortunately falls into the same category. However, unlike the previous two games, I suspect I’ll be playing it for a lot longer than those two: both because it’s just so much more fun and because even after two weeks of playing I’ve barely scratched the surface of what this bad boy has to offer.

The story of Tainted Grail: Conquest, as best as I can tell, is this: King Arthur and Merlin concoct a plan to invade Avalon, for some reason. You’re among the people they send over to fight this war, and when your ship crashes into Avalon, most people die from the monsters there, creatures of the “Wyrdness” — a strange magical fog that merges timelines that tries to grant wishes but does so really badly. The survivors hide by a statue for a few years, some unknown calamity wipes it out, and now you have to play the role of “hero” for some dubious and eternal ritual in the hopes that death and some goat-headed spirit will bring the village back to life. To that end, you fight strange wizards, morphed monsters, and stuff vaguely inspired by Celtic mythology in an effort to kill the four guardians.

If you thought “gosh, for a story claiming to be set in a ‘dark, mature’ version of the King Arthur mythos, the actual connection to Arthurian myth is basically nonexistent”, then you’re probably me. Indeed, in spite of how this game sells itself, it’s got basically nothing to offer fans of the King Arthur stories. Only two named characters have shown up so far, and the rest of the world is so different (even going so far as to get rid of the Christian and Pagan influences that make up the most interesting dimensions of the legend) that it’s functionally unrelated. Is that a bad thing? No, but it’s worth mentioning if you, like myself, are always on the hunt for good ol’ Arthurian retellings. 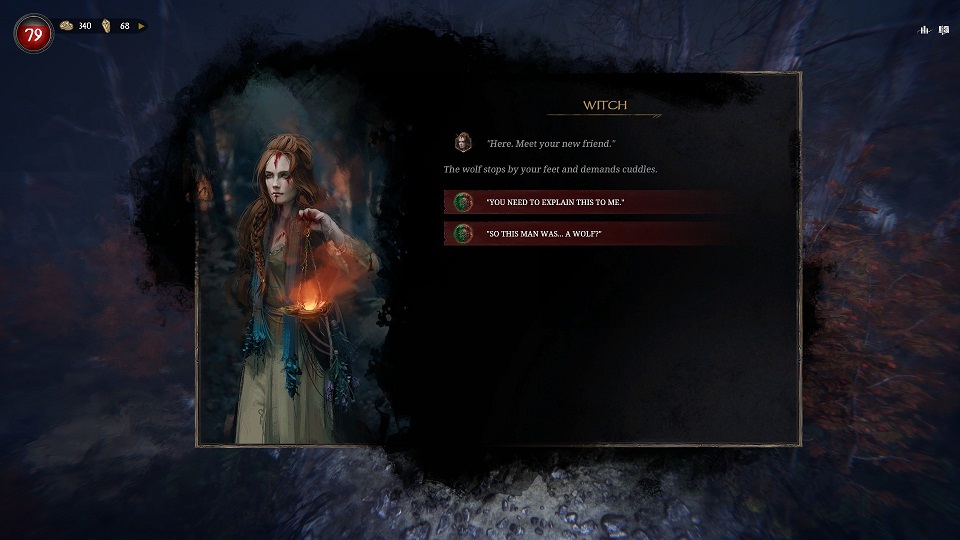 That said: the story is also the main reason why this game can’t be played with your attention split. For as nonsensical and abstract as the plot is, it’s also one of the main draws: there’s a lot of characters, a lot of dialogue, a lot of quests, and a lot of souls to save from the dubious “wyrdness”, and the game will frequently chuck some new lore or story at you even when you think you’ve got it all uncovered. It’s not quite as dense as Hades, which is so jam-packed with story to pick through even the “true ending” is just another beginning, but if you’re someone like me and you generally get bored of a game once you’ve unlocked everything it has to offer, this will keep you coming back for a few dozen hours at least.

But enough about all that: you’re probably wondering how the game plays, right?

Well, to summarize it badly: it’s Slay the Spire, but different.

Like Slay the Spire, you pick a class (of which there are three major archetypes) and start with a deck that has all the basics. Each turn you get three energy points (although you can raise or lower that via certain cards and passive abilities), which you can spend on the cards you draw. You’ll fight a bunch of enemies who’ll telegraph their attacks, and you need to use your cards, your wits, and a growing pool of consumables and passives, to make your way out of each combat and kill a bunch of bosses.

So in broad strokes, it’ll be very familiar to anyone who’s played Slay the Spire. It’s the specifics where things get unique. For one, the classes are a lot more distinct in Tainted Grail then the game that inspired it: there are technically nine to pick from, but in reality, there’s only three, with each class getting three different ways to play it. The first class you unlock, the “warriors” as you could call them, are the most basic class: you hit things until they die. Their most distinct feature is how they protect themselves: rather than building up a defensive resource like in Slay the Spire, you use block cards. One block = one nullified hit. Sometimes useful when dodging one-hit kills, but much harder to use when dealing with foes who attack multiple times per turn. Summoners, the second class, do their attacking and defending with four different monsters they can put on their side of the field, and them buff them with runes and sigils that increase their combat stats, their longevity, or boost their utility. They protect themselves with barriers, a much more familiar defense mechanism, which carry over at the end of each turn. Finally, archers have stances, which increase their defense and attack, with reversible sides that activate whenever the card is used. They attack with arrows, which are generally low-cost, low-damage things that can either be combo'd or come with utility to make a fight a bit easier. 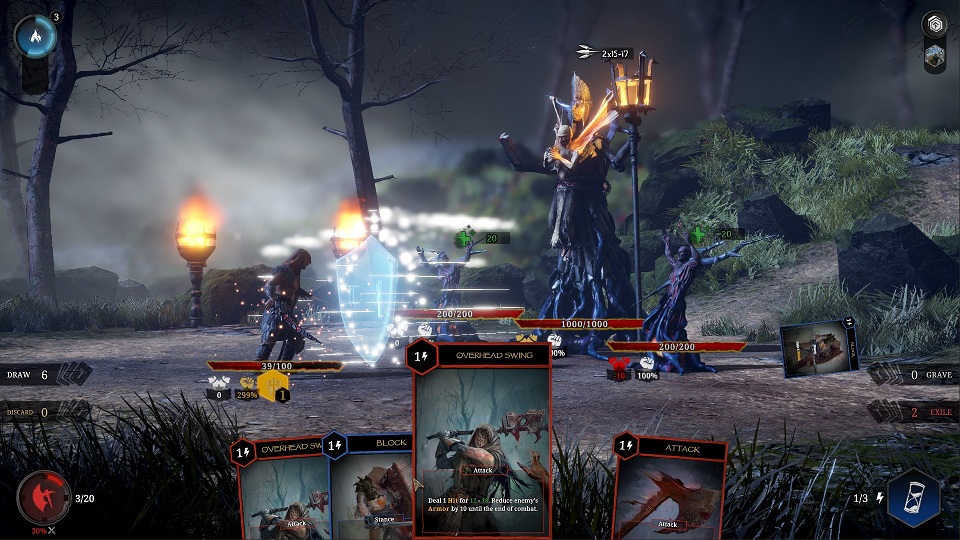 The three different subclasses are basically different ways to play around that general formula. For example: Summoners create units that survive until killed and can potentially grow endlessly powerful throughout a fight, but their monsters need to be activated manually. Blood mages summon monsters by sacrificing HP, and while their monsters grow and attack automatically, they only last a few turns before exploding. Necromancers summon low-level, low-damage monsters that need to be killed before they’re useful. Again, in broad strokes, they all play similarly, but they each put a twist on the formula that means you can pick the style you prefer and go all-in on that class.

But of course your class isn’t the only tool at your disposal. Runestones, which you find after combat, in a shop, and in events, offer straight stat buffs or new abilities that can turn the tide of battle in your direction. Consumables, which are also dropped randomly or purchased, do the same: healing you, increasing your stats, giving you another hit, ect. In my playthroughs so far, I rarely used consumables, even as I inched closer to higher difficulty levels, but runestones are essential to each run, which can often hinge as much on your luck with runestones as your luck with passives, which you get every third level.

While combat is the main gameplay mechanic, and the way you advance, it’s also treated a bit differently from other games like this. There’s an overworld, see, and instead of being forced into combat, you can inch around opponents if you don’t feel like fighting them. Generally, this locks you out of the after-combat encounters each monsters is guarding — things like NPC’s, vendors, and more — but since levels are capped and not every encounter is necessary, it’s possible, and even encouraged, to avoid certain fights that would be bad for your class and focus on winning the fights you want to fight. 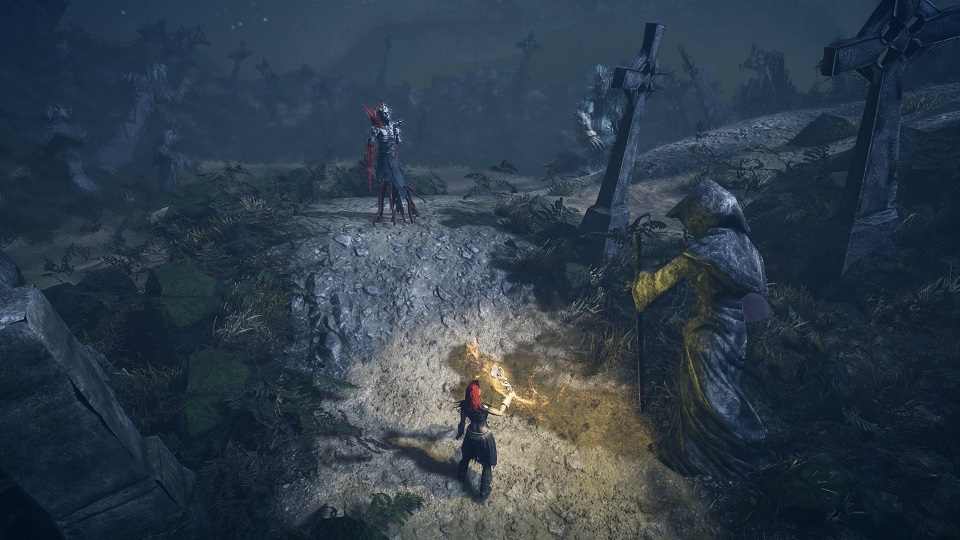 Oh, and you also have a village you can develop and populate, which is largely how you improve your character between runs.

Anyway, I know hearing about a kinda-small Roguelike isn’t what anyone was looking for this E3, but it’s what I got for ya. And if you’ve gotten this far, then… too late to complain now! Ha!

I'll probably have more to say about E3 next week, well after the streams are over and talking about the subject stops being profitable.