It cast a spell on me. For a time.

by pocru on Feb 21, 2021 @ 06:21 AM (Staff Bios)
Comment(s)
My birthday was just the other day, and like most birthdays, I got a few gifts and presented to help fill the holes in my life where my youthful energy and optimism used to be. I'm nearly 30 now, which means I've spent the lion's share of my 20's writing for this lil' website. That's one heck of a realization, given how every time I sit down to write one of these things, I feel like the same kid who tried to cram a few articles out between classes. It feels surreal to look back on the body of work I've produced over the past few years -- most of it lost now -- and imagine how I've grown. How much has changed in those first few years. How quickly things stopped changing in the latter few. As if my life had lost all the momentum I'd been building up since birth, and I'd found myself falling into a familiar, comfortable, but utterly confining dimensions of my modern life. Barley brushing up against maturity, far away from the benchmarks of adulthood generations before me had long since passed.

...anyway, I've been playing a lot of Spellbreak. 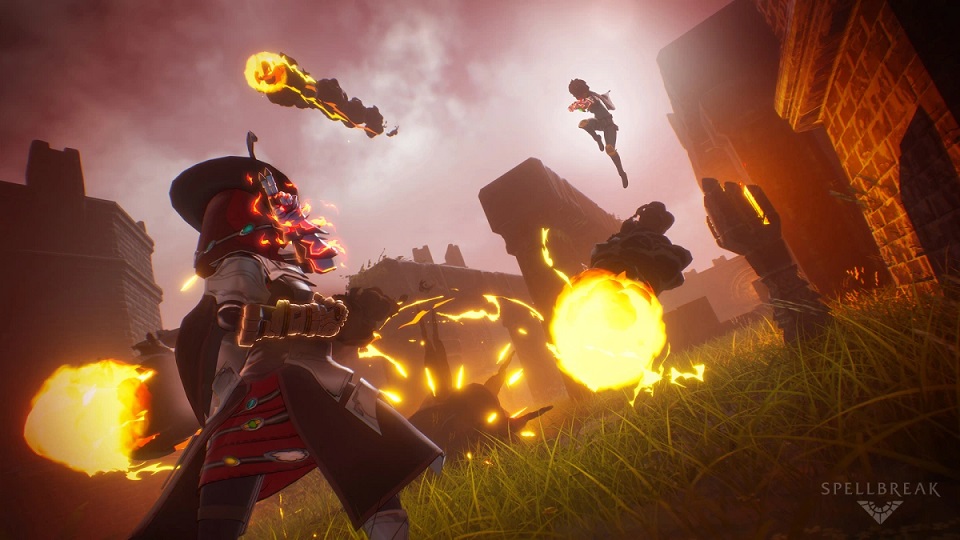 Spellbreak is a game by Proletariat, Inc, the folks behind the 2015 title World Zombification, and it boldly asks the question -- what if Fortnite wasn't about children playing dress-up and was instead about wizards playing dress-up?

To be fair, outside the extremely cartoony art style and their backwards monetization practices, Spellbreak is actually one of the more unique and distinct entries into the Battle Royale genre and has very little in common with Fortnite. In Spellbreak, you drop from portals in the sky onto the map, run around opening chests to collect better weapons, armor, and consumables while trying to outrun a slowly-closing series of circles, and either fight or flee every time you run across an enemy wizard. Last wizard -- or wizards, in group matches or Clashes -- standing wins.

But whereas Apex Legends has character abilities, Fortnite has construction, and PUBG has lag, Spellbreak's unique selling point is the combat itself -- as it foregoes guns and grenades for gauntlets that let you cast dope-AF spells.

You start each match with one "primary" gauntlet, which represents one of six elements: 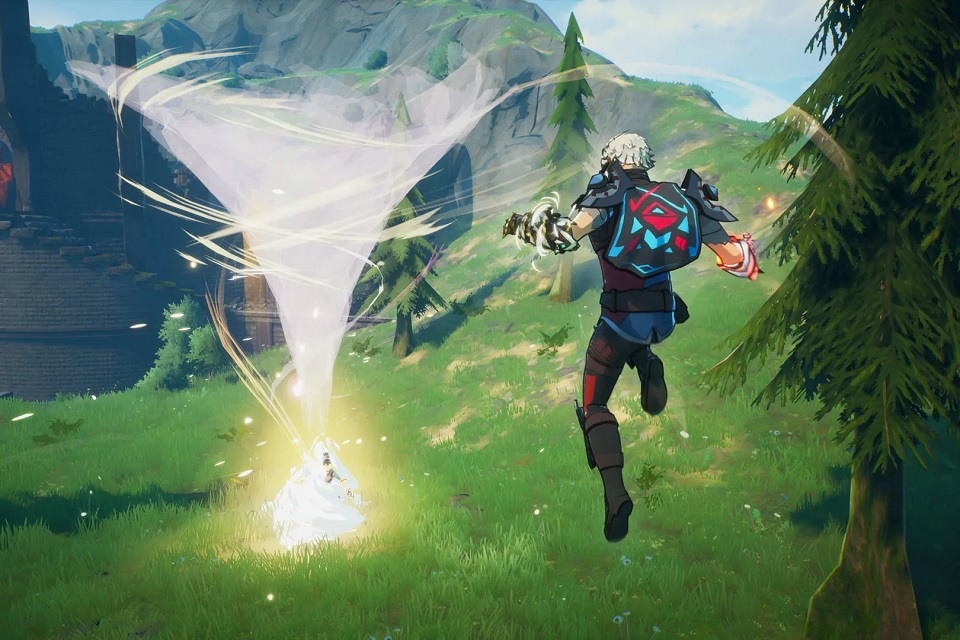 These primary gauntlets are stuck on your arm the whole match, but gain bonus passive abilities as you reach circles and "level up". For example, when you have the stone gauntlet as your primary, you get twenty free armor that regenerates every time you basic attack. As you level up, you unlock the ability to store multiple boulder throws at people, cause shockwaves every time you land from a tall jump, and make your boulder attacks grow in size and damage as they fly through the air. Toxic, on the other hand, has passive abilities that allow you to turn invisible when you step into your own cloud of smoke, slow enemies who step in your acid puddles, or create extra clouds of smoke every time you throw some down.

These passive abilities are important because, during the course of a match, you'll find a second gauntlet you can put on your off-hand. This means you're not stuck just shooting off fireballs or wind blasts -- you can shoot off both, one in each hand, but you only get the passive bonuses of your main gauntlet.

The second gauntlet is also the source of this game's real selling point: combat isn't really so much about just throwing magic spells at each other, it's more about using improvised alchemy to combine different elemental effects together to create chain attacks that devastate the opponents you manage to catch inside.

Indeed, no spell exists in isolation: almost every elemental effect combos with each other, creating unique ways to trap and damage your foes. Mix the wind gauntlet's tornado with a bit of fire, and you make a flame vortex that deals a lot more damage. A toxic cloud with a fireball, however, produces a heavy-damage explosive. Throw a boulder through a fireball and the rock will catch fire, dealing additional damage. And fire+ice creates a wall of steam that enemies won't be able to see through. You have to mix the effects of your two gauntlets -- and the other spells cast by your opponents -- to maximum effect to survive any given match. 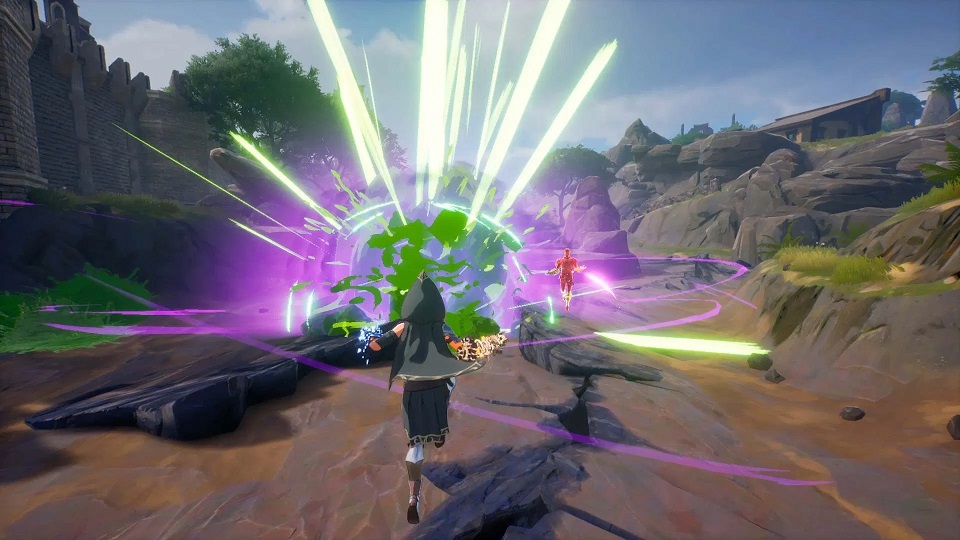 Personally, since I have a hard time aiming, I prefer the wind and the fire gauntlet combo: it's relatively easy to hit with both the fire well and the tornado separately, and together, they create a reliable way to both trap and damage foes. But I have a friend who likes to mix ice and lightning: one ice perk lets you create a path of ice whenever you use your basic attack, which you can skate across for extra speed. But one shot of lightning electrifies the whole track, damaging anyone on it. Conversely, another friend of mine seems fond of the Lightning and Toxic combo, as one shot of lightning into the toxic cloud creates a huge burst of electricity that does a bit of damage and stuns your opponents for a few seconds.

Movement is a pretty big deal in the game as well, although less so than spells. Everyone can run, jump, and spend mana -- basically ammo -- to 'levitate' a little bit. You also find special ruins that give you special movement options or combat buffs -- which can range between quick hops and dashes to huge teleports and invisibility. All of this -- the movement, the combat -- is further customized with special perks, which you pick at the start of each match. These can give you simple buffs, such as extra HP or spell speed, to more nuanced ones, like one that lets you find more consumables, makes you immune to any crowd control, or store multiple charges of any runes you find.

Having played most every major Battle Royale game out there -- PUBG, Fortnite, Apex Legends, and now this -- I can say firmly I like it more than most of those other games, but it might lack their replayability.

One of the most important things about a Battle Royale game is that movement feels good, because while people might play for the shooting, they're going to inevitably spend most of their time running from place to place. Apex Legends understood this and executed it well with its sprinting/sliding/zipline movement. Spellbreak's dashes and levitations make movement easy and forgiving, and while it's never quite as thrilling as sliding down a hill at full speed while shooting at another player, it gets the job done. Which is more than PUBG or Fortnite can say, as both of those games are purely functional in their movement functions.

Actual combat, on the other hand, is a blast. You're zipping around, throwing around these huge spells, at sometimes very small targets. You miss more than you hit, but the intricate dance of floating bodies and particle effects remains completely engaging. And the feeling you get when you do eventually knock down a foe is nothing short but thrilling. Since most people can take quite a few hits before going down, it's less about who sees each other first -- like in Apex or PUBG -- and more about skill. Awareness can get you an early hit or two, but if you've got the skill, you can routinely crush other players no matter how flat-footed you were. This can also be a bad thing, though, because at least with, say, PUBG, it's possible for a low-level player to claim victory every once in a while by sniping out an objectively better player. It's still possible to do that here, but it's a lot harder. 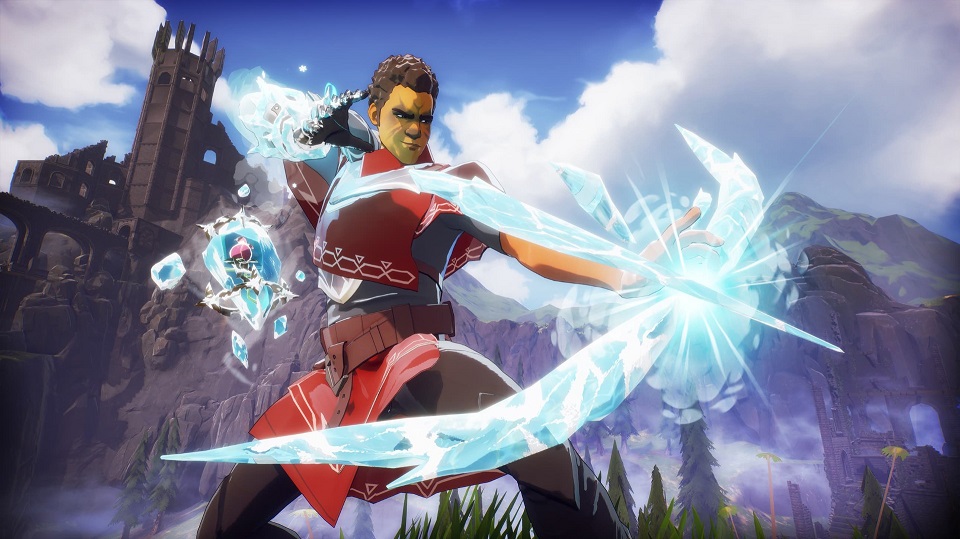 That said, with only six weapon types, a handful of movement buffs, and a map that consists of largely similar castles and villages, Spellbreak is probably going to struggle to keep my attention the way League of Legends or Apex Legends did. Maybe more variety is coming, but so far, it's largely been more of the same.

Still, if you're looking to have a good time with a few friends, you could definitely do worse.