The rest of the hands are severed.

by Cryptastic on Aug 06, 2016 @ 08:55 PM (Staff Bios)
Comment(s)
During QuakeCon 2016, I had the pleasure to sit down with Tadeusz Zielinski from Flying Wild Hog. He happily took time out of his schedule to meet with me and discuss the details behind Shadow Warrior 2. Their booth during the convention was one of the most impressive. Right in the center of the room, they set up a makeshift shrine, complete with a cherry blossom tree and a torii. This set the perfect scene for learning about Shadow Warrior 2. 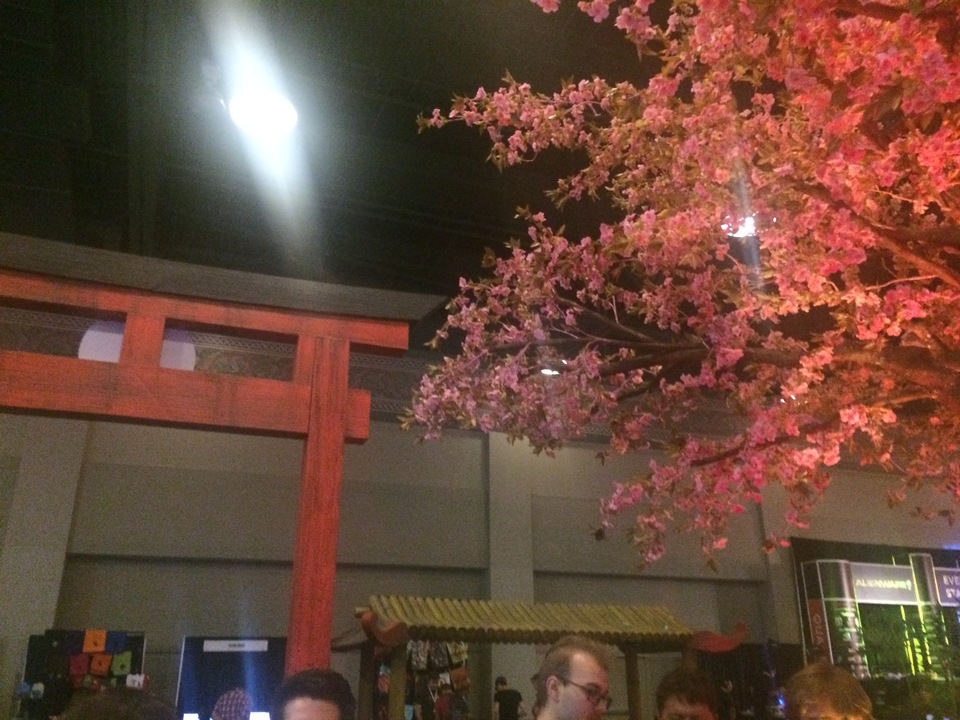 They didn't let me take them home.

I started off the interview with a bit of honesty. I never played the original Shadow Warrior (remake) from Flying Wild Hog. I also wasn't interested in this sequel. That was, before I saw Zielinski showing off some gameplay the day before. As I stated before, I was colored very impressed at that exhibition, especially the precision cutting mechanic. When I brought that up, his eyes lit up. He passionately spoke about how they integrated the mechanic and how important it was to get it right. Immediately, flashes of Metal Gear Rising Revengeance assaulted my mind.

Zielinski admitted that while he liked the idea of Revengeance's sword work, something didn't quite feel right. It was nice to fully define exactly where you were going to cut, but the mechanic felt out of place. Time slowed, an ethereal bar floated in space, and you spun it around until you got the angle you wanted. To say the least, it wasn't organic at all. The action had to completely stop if you wanted to swing your sword a certain way.

Just use the rocket launcher, I guess.

So Flying Wild Hog learned from this shortcoming. Their mechanic exists seamlessly with the combat and action. Now, in order to do that, they had to make a compromise. Players cannot swing the sword freely, defining the exact degree of the strike. Zielinski told me that the blade mechanic works on an 8-axis system. That's a bit shy of infinite, but it is a fine price to pay to keep fluid action and combat.

You can't have a sword precision mechanic and not have dismemberment. Shadow Warrior 2 absolutely shows that off any chance it gets. Arms, legs, and otherworldly appendages fly around like confetti. Appropriate sword swipes maim your enemies. And if swords aren't your thing, the guns also make the limbs fly.

Zielinski told me that the game offers 70 weapons. Players aren't expected to make use of each one, though. When asked, he said that the variety of weaponry helps ensure everyone plays to their own style. Different players have different preferences for combat. While each one may only stick to 4 or 5 go-to weapons, this selection gives each player the freedom to customize their own playstyle in the game.

Even if that playstyle is "badass."

This was evident all around me. The booth for Shadow Warrior was lined in monitors, each with a fully engrossed player. Every time I glanced at a different screen, I inevitably saw a different weapon. Given, the katana was nearly everpresent, but pistols and shotguns made appropriate appearances. I expect more of these differences as the game releases, offering its full repertoire of weaponry.

Shadow Warrior 2 is coming out in September of this year. So next month, if you're looking for a first person carnage simulator, then give Shadow Warrior 2 a look. I already have, and I think it's safe to say that I'm sold on it.