Bring on the giant vampire ladies!

by pocru on Jan 31, 2021 @ 03:55 AM (Staff Bios)
Comment(s)
I'm not generally a fan of horror games, as long-time readers will no doubt recall, but that's never stopped me from having strong and very uninformed opinions about them, because I like sounding like I know what I'm talking about and I love sharing my opinion with people who don't care to hear it. But if there's one horror franchise I have at least some credentials to talk about, it's Resident Evil. 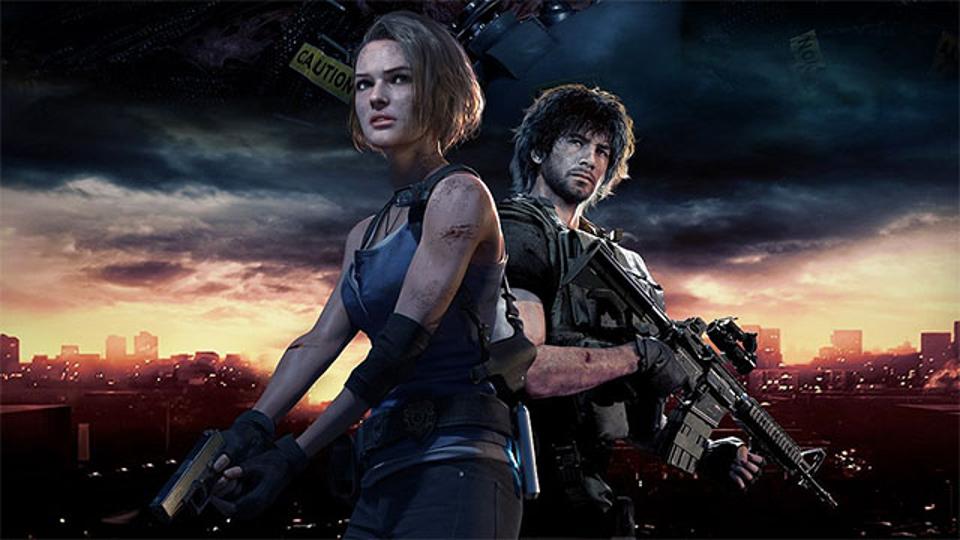 Because of all the horror games out there, Resident Evil is the only franchise I've actually engaged with. Out of the 20+ games in the series, I've actually played two of them, Resident Evil 4 and Resident Evil 5, and I've watched a few playthroughs and speedruns of the others, so I at least have a gist of what they're all about. I even watched almost all of the live-action movies. And it's no accident these are the games I tend to play the most in this otherwise unexplored genre: I have a sort of odd affection for the Resident Evil series.

I couldn't tell you why. If I had to put a word to it, I'd pick... pluck. Despite being one of the most well-established horror games out there, Resident Evil always kinda feels like it's never one to rest on its laurels. It's impossibly infused with this shameless charm that manages to seep into every corner of its messed-up universe. Sometimes it's full of action, like Resident Evil 5, which only managed to startle me once. Sometimes it's genuinely scary, like the Resident Evil 2 remake, or a few choice times in Resident Evil 4. But it's always at least a little silly, even in the games where it tries hard to be as conventional with its frights as possible, like Resident Evil 7.

I mean, sure: the parts where you're being chased by an immortal hillbilly with a creeper smile, or wrestling with your presumably possessed wife while she stabs your hand, are pretty darn creepy. But then Capcom can't help themselves, and before long, all restraint and subtly is out the window as you find yourself shooting rockets at giant flesh eye stalks that are the size of a small building.

There's a certain childish giddiness to it all, I guess. While other horror franchises work hard to come off as more disturbed, more creepy, more grotesque, and more shocking (see: Amnesia, Outlast, Silent Hill), Resident Evil in all its forms can't help but indulge in the sillier sides of its universe while only occasionally winking back at the player. And I would argue the franchise has often been at its best when it leans into those inclinations, rather than leaning away from them.

Which is why I found the third new trailer for Resident Evil 8: Village to be so... exciting. Because it looks like Capcom is going to try to more completely mix the historic silliness that makes Resident Evil great with the gameplay and spook innovations that made Resident Evil 7 feel like such a fresh new direction for the franchise. And I am here for it.

And yes, I'm talking about the tall vampire lady. 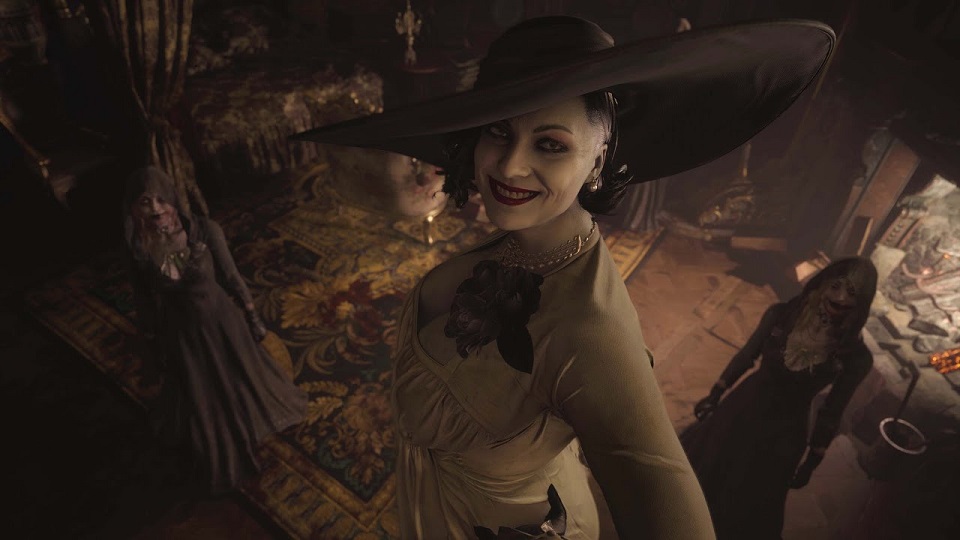 Resident Evil isn't exactly new at trying to mix horror with sex appeal. Most of their games at least play with titillation, from Jill Valentine's skin-tight bodysuit to Ada Wong's impractically sexy dress in Resident Evil 4. Most of their games can't resist the temptation to at least dabble in fan service, and in fact, Resident Evil 7 was probably their first game ever that functionally had none at all. Of the three major female characters in the game, one was an old woman who moonlights as a giant cockroach, one was a little girl disguised as a grandmother, and the other was Ethan Winter's wife, who looked like a normal human woman... a startling change of pace for the franchise as a whole.

And don't get me wrong: that's all well and fine. I don't think anyone was marking the game down for not having any characters you really wanted to bone. But it also wasn't very... off-brand? It lost a little bit of that iconic Resident Evil flavor, and it felt just a little more generic because of it.

Resident Evil 8 is CLEARLY looking to rectify that and lean into the series more unique traits. The merchant, for example, is a comically obese gentleman operating out of the back of a covered wagon. There's a lovable dork with a giant hammer and dark glasses who has magnetic powers and isn't nearly as cool as he thinks he is. And most importantly, it seems a large portion of the game will be set in a castle where you'll be hunted by sexy goth bug women and an 8-foot tall vampire who's supposed to called Lady Dimitrescu but will be remembered in the hearts and minds of gamers everywhere as "mommy step-on-me".

Her design is perfect. It's easy enough to make a character attractive using exaggerated and oversexualized body features -- games have been doing that for ages, and most have failed to produce the level of thirst that Lady Dimitrescu inspires. But Capcom was smart: she's not attractive just because she's got some noticeable tiddies and an enjoyable behind. It's her slightly pudgy belly, a realistic necessity to a woman with those proportions. It's her old-fashioned style and mannerisms, which kind of provoke a "sexy grandma" feel. It's her clearly caked-on makeup, which shows she's putting in an EFFORT to look good. And there's the fact she's approximately eight feet tall and dominates any room she walks in on.

It's easy to make a character "hot". But Lady Dimitrescu is a captivating blend of hot, unrealistic, and oddly grounded. It makes for a somewhat perfect storm of a design that makes her... well, perfect for simping. Sure, it's practically a guarantee that at some point in the plot she'll transform into some hideous Cronenberg monstrosity you'll need to blow up with a rocket launcher... but who says that strictly detracts from her sexuality?

There's also the fact she seems to control a small harem of sexy goth girls. Capcom tried a little harder to make these women actually seem threatening -- between their unbreaking serial killer smiles, bleeding eyes, and the fact that bugs seem to be constantly crawling all over their unwashed bodies -- but those exact features are actually what make them perfect accessories to Lady Dimitrescu, and an extension to her delightful charisma.

See, there's a reason people mostly simp after "villains", be it Widowmaker, Sephiroth, or even friggen Bowser: people are attracted to power and danger. Lady Dimitrescu needs to feel threatening in order for our imagined relationships with her to feel exciting, and those henchwomen of hers supply that in spades. So whereas in some circumstances people might have seen sexy goth bug girls and thought, "oh, well, that's cool I guess but it's kinda weird and not very scary", combined with Lady Dimitrescu, they... well, they're still not exactly _scary_, yet, but they're certainly good at getting the ol' engine running.

And while that might not make for a scary horror game... it makes for a great Resident Evil game.

One last thing I want to point out about Lady Dimitrescu before we call it quits: the more I learn about Resident Evil 8, the more convinced I am it's supposed to be a sort of modern "remake" of Resident Evil 4.

It's not hard to see why I'd think that -- the premise is pretty similar, where you have to go to a mysterious village whose citizens have been infected with a strange, horrifying disease that have turned them into monsters in order to rescue someone's daughter. Heck, so far, the level structure is even pretty similar, with people starting in the shacks of the common folks before moving on to explore the lavish mansion of a much more powerful antagonistic force. But while those plot elements seem similar... Capcom seems to be playing around with the Resident Evil 4 script a little.

Rather than rescuing the President's adult daughter, your goal seems to be rescuing your own baby daughter. Instead of a mysterious cloaked merchant, you'll be dealing with an obese, over-the-top peddler of goods. And instead of fighting a short, decidedly unsexy painted man with a napoleon complex, you'll be fighting a tall, extremely sexual woman with a charming, almost homely flare. They both even have bug-themed bodyguards, but again, the hidden and mysterious creatures employed in Resident Evil 4 stand in stark contrast with the easily seen and arguably enjoyed women at Lady Dimitrescu's beck and call.

Heck, the weird hammer guy at the end of the trailer might even be this game's version of Louis, the mysterious agent who helped Leon in Resident Evil 4.

If this is Capcom's game -- and since Resident Evil 7 did a similar "inverse the pieces, keep the script" job with Resident Evil 1, I'd be a bit surprised if it wasn't -- we could expect that there are a lot more hidden secrets to be uncovered in Resident Evil 8... assuming anyone bothers to try to escape Lady Dimitrescu.

Which I'm not convinced they will.

The gravity of the situation is understated.

Not as good news as it may first appear.

Anthem Next is Canceled, Bioware Giving Up

Anthem will continue running, but it won't get the revamp it needs.

Konami is Turning Frogger into a Game Show