It goes past "so bad it's good" and laps a few times.

In theory, visual novels should be one of my favorite genres out there. My “jam”, if you will. After all, I like creative writing, I like video games and anime, and I spend a considerable amount of my time reading actual books. So you think a medium that fused all of these different elements together into one seamless experience would be perfect fit for me. And yet, for years and years and years, I’ve never really engaged with the genre all that much. I played a few free visual novels on Steam, and I even got two endings in Hiyato Boyfriend, the Pigeon-themed dating sim that was just sincere enough that I couldn’t ultimately treat it as a big joke. But by and large, despite being aware and even curious about some big-name and highly loved visual novels – like Doki Doki Literature Club, Higurashi When They Cry, Clannad, and the Danganropa series – I haven’t been able to really muster up the energy to care about them, or even finish the ones I start. 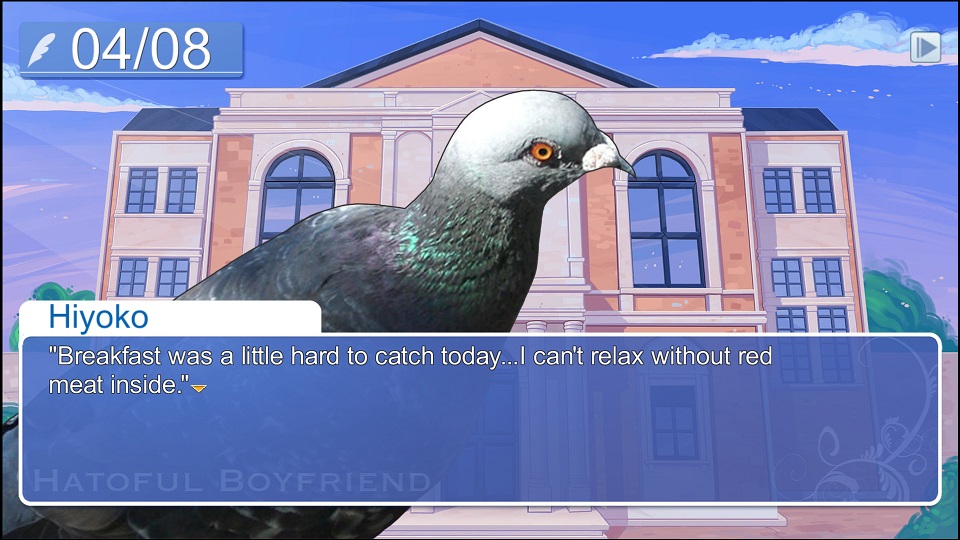 There’s just something about them that doesn’t… grab me, I guess.

So with all that said: allow me to introduce you to my latest obsession. Pizza Game.

There are a lot of comedy-focused visual novels out there, like the aforementioned Hiyato Boyfriend. There are just as many visual novels who try to make the fact they’re a visual novel the butt of a joke: like the Colonel Sanders dating sim that was making the rounds on social media.

Pizza Game is a game that is so abstract and objectively stupid it defies any serious analysis. There is not an ounce of sincerity or genuine love tucked into it: it’s 100% plastic, internet-grade stupid had has almost no redeeming quality and absolutely no redeeming characters and yet I can’t remember a game that’s ever made me laugh harder or longer than this hot, disgusting mess.

Your avatar, the boy-crazy Kiane, is hopelessly stupid, selfish, mean, and obsessed with a man who’s clearly a serial killer. She’s surrounded by a cast of equally stupid characters – from fried chicken demons to a lamp -- who aren’t so much mocking tropes of visual novels as they are the same idiot wearing the different skins of a more traditional visual novel characters. And as the story advances, it only gets dumber, like a long-winded child who has more imagination than sense and no notion of pacing.

It’s not refined. It’s not intelligent. It’s not trying to make a point. There’s no commentary here. No intention, as near as I can tell. It’s just stupid people being stupid in a stupid world. And it’s so… impossibly refreshing for me. 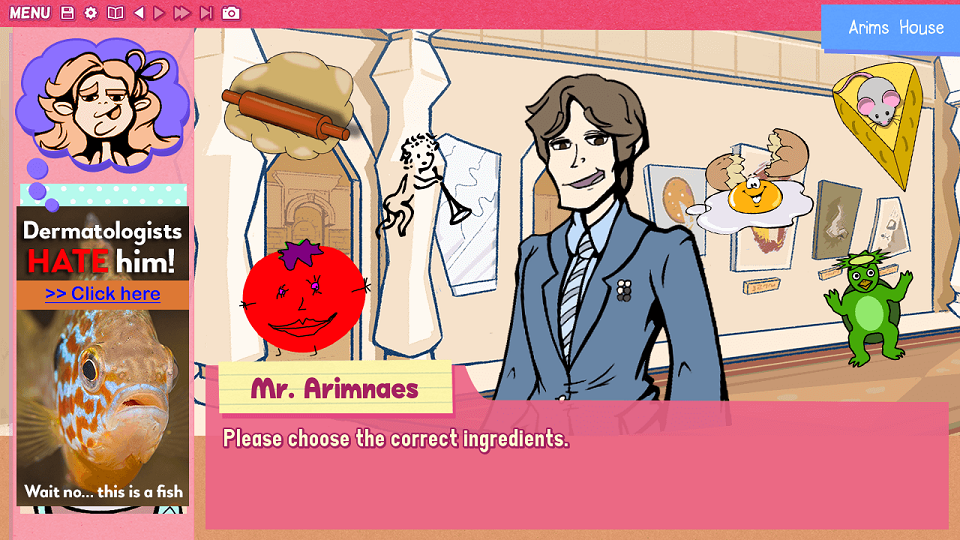 Because it’s an example of how something great can come from a whole lot of broken parts.

Here’s the thing: I work as a copywriter. It’s my day job. And copywriting, if you didn’t know, is an exercise of non-stop iteration and refinement. I’ll be asked to write one tiny thing – for example, a banner ad for one of our products – which, at most, can fit about seven words into it. Maybe eight or nine, depending on the character count. Sounds simple, but it absolutely is not: the people who run the show have a lot they want to communicate with those seven words, and you have to find the absolutely perfect mix of meticulously vetted words and design elements to make the pop-up as eye-catching and enticing as possible. Every little thing is considered and hammered out between designers and writers, and then it goes through several waves of feedback from higher-ups who may or may not know what the hell they’re talking about. It can take months to make that single pop-up, which is a lot of time and energy for something that we know most people will completely ignore.

And that’s just pop-ups. Long-form copy is worse. We’ve got teams of people who make sure everything we write is attractive to Google and other search engines. We’ve got interlinking to worry about, we’ve got cannibalization, we’ve got to have our upsells and our cross-sells and god help you if you forget to put a call to action at the bottom. Facebook posts are carefully tracked and measured out. Emails are triple-checked and re-written dozens of times. Nothing is simple. Nothing is fast.

…and you’d better believe that nothing is fun. Everyone here is obsessed with perfection and convention, and terrified of doing anything that would break the status quo. Which on one hand, makes sense -- our industry thrives on people forgetting we exist and reminders are often toxic – but on the other hand, it’s deeply unsatisfying to have a bold new idea that could actually improve how we communicate, or our customers lives, and have it shot down again and again because it could, theoretically, rock the boat.

Which is why this game is so personally gratifying for me. A game ripe with misspellings, lazy designs, errors, and mistakes. It’s beautifully broken and I can’t get enough of this terribly typo-filled world. It feels so damn refreshing for me. 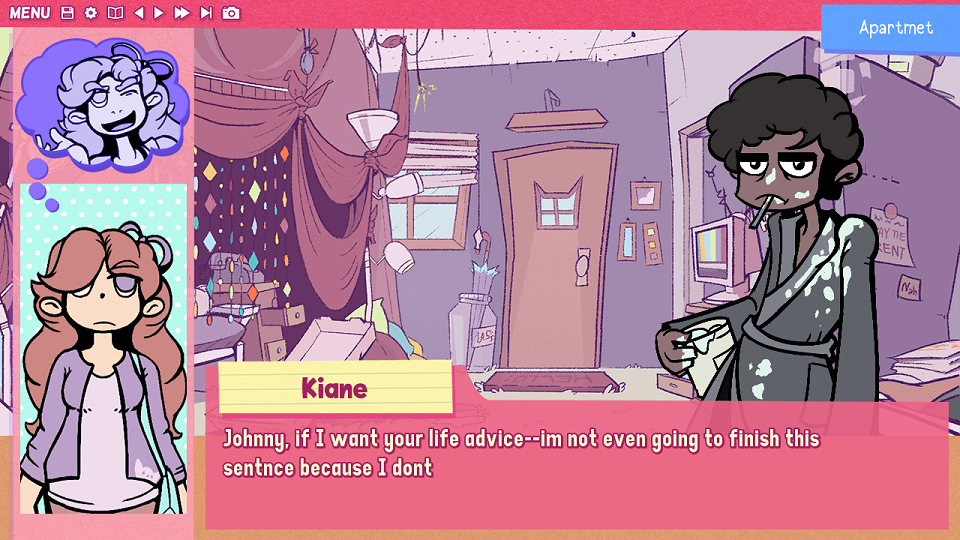 But that’s the hidden genius of this mess of a game: it’s all by design. It claims to be the worst visual novel (and it very may well be) but when it comes to all the things that matter, it functions perfectly. It never crashes, the saves work fine, and there are even accessibility options for the less-able players. It’s sloppy, but not in any actually dangerous or un-fun way. So really, it’s less that the game is sloppy or unfinished, and more that ‘sloppy and unfinished’ is the game’s core ascetic. It’s a stylistic choice, not a result of actual sloppy and unfinished game making.

And it really opens your eyes to the other kind of design possibilities that exist out there, undiscovered by an industry that is too scared to break convention to truly explore the possibilities afforded to us by video games.

I don’t work in the world of video games, but I’m friends with a lot of people who do, and their stories are pretty closely mirrored to mine. Video game companies, like mine, are generally risk-adverse. And that’s not a new observation by a long mile but it could still be surprising to learn just how convention-bound games are even though they are an expressly creative medium. I’ve heard countless stories of cool new features and innovative new ideas being canned because the higher-ups were afraid of rocking the boat. Sometimes that makes sense – it might be ‘innovative’ to make the R3 and L3 buttons on the PS4 controller the triggers for your gun, but it sure as heck wouldn’t be enjoyable – but sometimes it stems from a simple and unreasonable fear of the unknown.

Pizza Game is not going to make a convincing argument for game studios on the merits of exploring ga new ascetic that they might assume is toxic. As a not-pornographic visual novel its appeal is already limited, and it hasn’t even sold more than 20,000 units at time of writing, according to SteamSpy. But it’s a nice reminder for me, at least, that gaming isn’t just about entering an unfamiliar world to do familiar tasks. For example, while I’m also enjoying The Surge 2 (I’ll be writing more about it later, I’m sure), I have to acknowledge that as an experience, it’s extremely similar to other games I’ve played. I’m a hero in a rather crappy world. I go to places, I beat people up, I grow stronger, and I beat up other people, obsessively in the name of making the world a better place. If you strip down most media to their core you’ll find something similar, a hero-of-a-thousand-faces kind of plot, but… it really doesn’t have to be that way.

Pizza game has reminded me that gaming can be about whatever crazy crap game creators can craft up. I don’t have to go around beating people up in what’s (admitted a very, very good) basically a sci-fi souls game. I can instead be a completely unlikeable turd-child who sets fire to random objects and buys solitary eggs because I have the mental capacity and emotional maturity of a box of wet cardboard. And while I would never, ever want to live in the world of Pizza Game, and I objectively hate every single person who lives there, as a vehicle to make me laugh and have a good night, it can’t be beat. 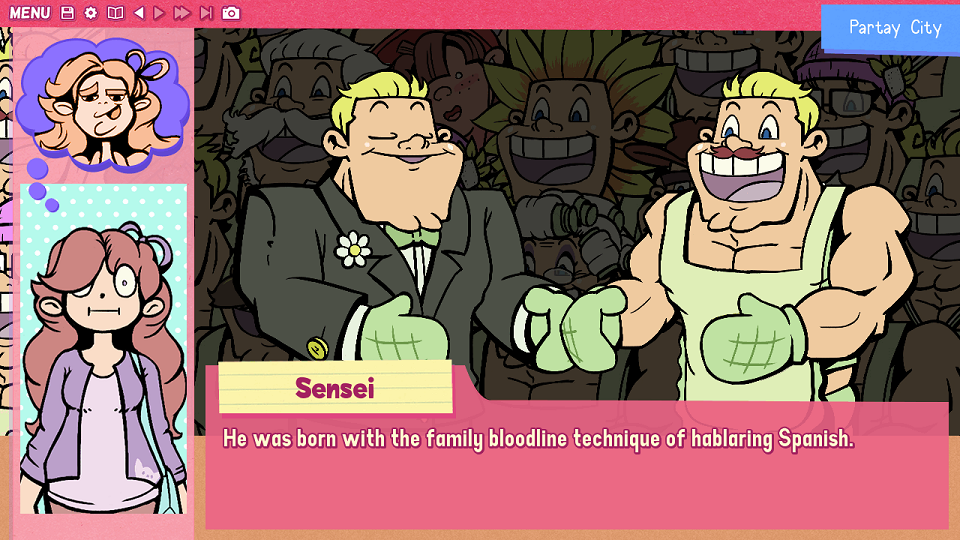 In any case. I’m sure more games like this exist – they absolutely have to – I just have a hard time finding it. Just like I struggled to discover Kenshi, despite it being exactly what I was looking for at the time, I’m sure there must be more games, unknowns hidden in the shadows, that play with expectations like that. I just hope that I’m lucky enough to run into them one day.

I’ll just have to keep an open mind.