Nothing like being trapped between a rock and a safe space.

I understand their appeal; certainly, the same way I can "respect" horror movies without ever watching them. Heck, I'd even go so far as to say I've retained my almost childlike, morbid curiosity about them, and I will shamelessly admit to watching Markiplier's assorted streams and videos because I want to explore the depraved imagination of horror games without actually "experiencing" them myself. But otherwise, outside dabbling in the popcorn-horror of Resident Evil, and the hypothetical horror aesthetic of games like Dark Souls and Bloodborne, I tend to avoid having any true blue horror games in my library.

That's changed recently, however, with Phasmophobia. 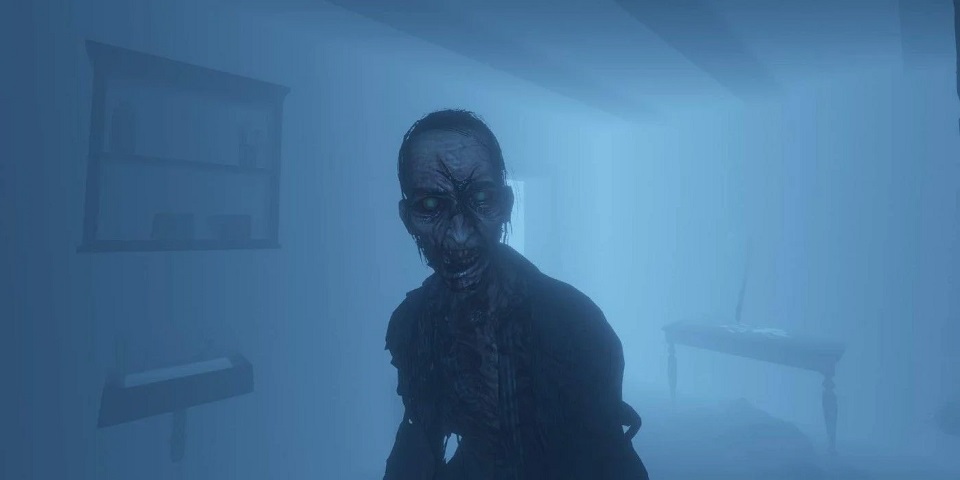 Now, I would have never gotten into this game by my own accord: rather, a friend of mine wanted to play it as a group as a sort of long-distance, socially responsible Halloween party, and since I needed some reason to feel seasonal cheer, I decided to take them up on their offer. I bought it, got some Halloween candy to snack on, and we started to play.

And I gotta say, it's doing something really special.

Not that you would know that looking at screenshots or the trailers or anything: moment to moment, it looks and feels exactly like every one of the hundreds of Amnesia knock-offs to spawn in recent years. It's got those early PUBG asset-heavy graphics, worthless flashlights, a useless "sprint" button, and some fairly cookie-cutter ghosts that veteran horror players will probably laugh at (but I still found really spooky). But while the stylistic elements of the game are seriously lacking, the unique mechanics, different take on multiplayer, and story hook is where Phasmophobia shines.

See, with a lot of horror games, the convention is fairly straightforward: you are in a place you do not want to be, and you have to escape. Usually this involves trying to navigate a maze of rooms trying to solve puzzles, environmental or otherwise, while some spook hunts you down. That's a tried and true formula, and it certainly works, but Phasmophobia takes that premise and gives it a rather unique spin: it's putting you in the shoes of every horror movie protagonist you've ever yelled at for entering the obviously haunted mansion.

Your "role" in the game isn't to escape or even banish the many ghosts you encounter in the game's (frankly lackluster) collection of maps. Rather, your job is to identify the ghost using clues and signs you receive as you play, and then get out alive so the actual ghostbusters can do their jobs. Sort of like a forward scouting party before the calvary charges in. That means you actually have to go out of your way to find the ghost's haunt, agitate it, and use a plethora of ghost-hunting tools to narrow down your choices until only one remains. 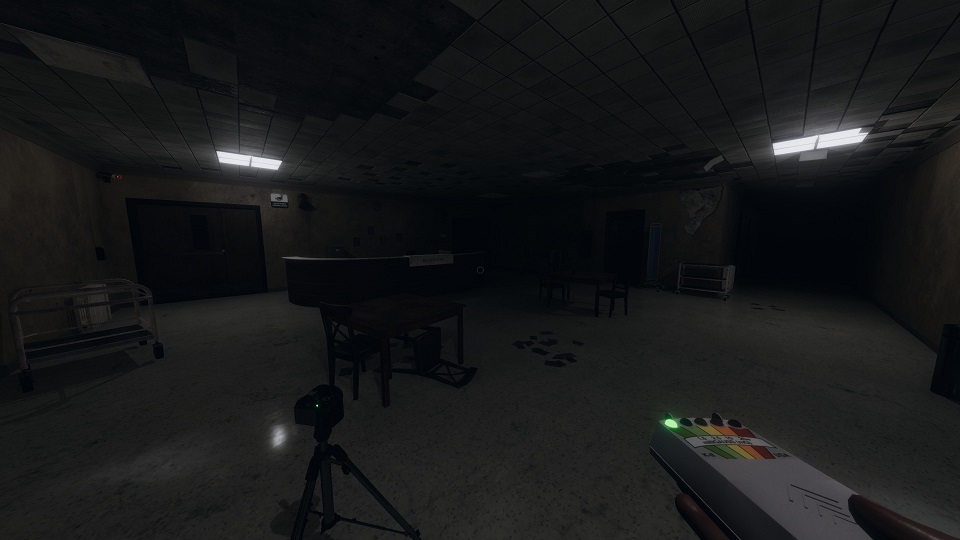 Now, that alone is an interesting hook, because it's asking players to walk a fine line: you want to agitate the ghost enough to see the signs you need to identify it, but not agitate it so much that you suddenly find yourself locked in the house being hunted by the undead spirit in question. In practice, there's not a whole lot you can do to manage that balancing act, a lot of times things seems to come down to chance or luck, but the game does a good job of getting you both excited and scared every time you can add one clue to your journal.

It's also a natural fit for a multiplayer horror game: with so many different tools at your disposal, some for identifying ghosts, others for tracking them, and yet more to dissuade hunts, having multiple people covering multiple things allows you to assign roles and figure out tasks. One person goes in with a thermometer, another sets up cameras, and a third tries the voice box.

Which is what brings us to the crowning jewel that makes this whole formula work: the truck. As the title suggests, the truck at the starting point of each map is the secret sauce that turns Phasmophobia from a fun little jaunt to a seriously creative horror title.

See, everyone starts in the truck, which is a well-lit safe space at the start of each level that has everyone's equipment, a map of the building you're searching through (with GPS locators for each player), everyone's "sanity" (which is basically a health bar), and a computer that displays the video feeds for the cameras that have been set up around the premise. It's also got an "Activity Tracker", which can identify how "active" the ghost is at any given time. And as I mentioned, the truck is safe: to date, no ghost can haunt the players in the truck, which means if you've been having a rough go of it you can chill out in the truck to collect your bearings before delving back into the thick of things. 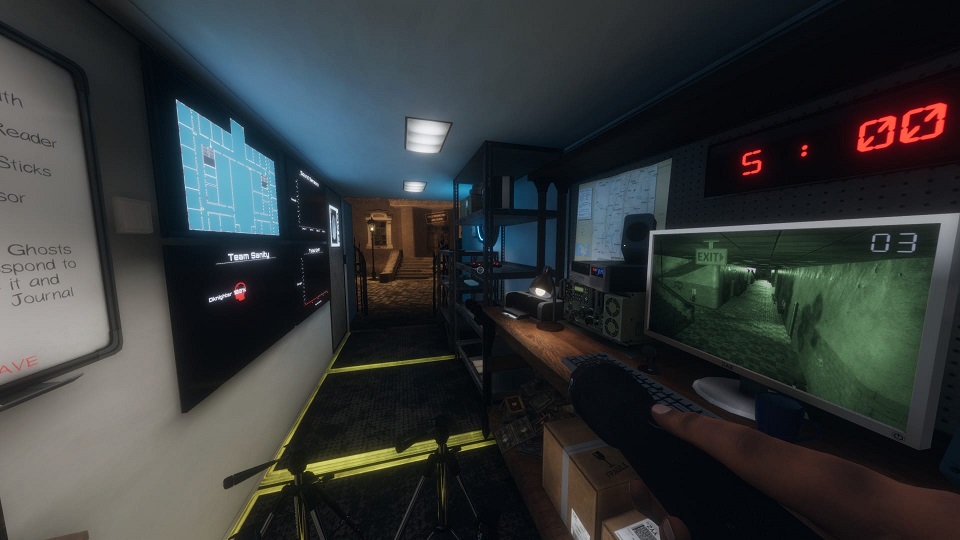 Generally speaking, it's smart to have at least one player in the truck at all times, sort of acting as an HQ to keep everyone informed. The person in the truck has a lot of things they can do in that tiny space: they can warn you when a motion sensor has been triggered, if another player's sanity is dangerously low, if they spot any ghost orbs (which only cameras can pick up), remind players who they're hunting and what bonus objectives they need to complete, how active the ghost is, noise ratings, or guide people through the complicated map to reach an exit or a specific room. Heck, through constant radio chatter, they can even be the first warning people get when the ghost starts actively trying to kill them, as the radio suddenly cutting out is often your first and only warning that things are getting hairy. In that respect, the truck person is almost the most important member of the crew.

So the person in the truck acts sort of like HQ, playing a safe but vital role in keeping their party healthy and productive. Which is brilliant: not only because it creates another organic "role" in this multiplayer game with no classes or skills, but also because it gives a place for cowards like me to play with their friends. I haven't died once in my time playing Phasmophobia , because my friends respect the fact that I'm a huge coward and don't like being scared in games, they let me take the "role" of the overseer in the truck.

Thanks to the truck, I'm playing a management sim while my friends play a horror game. It's like being able to play an RTS while your friends play a "hero" in your army in a diablo-style hack-and-slash. Or like playing an RPG while your friend supplies you with buffs from a mobile puzzle game linked up with your system. It's a realization of a long-awaited and promised style of "cross-genre" gameplay that frankly I can only hope other games start to capitalize on.

But there's one last trick to the truck that makes it truly ingenious, the blood-splattered whipped cream on this haunted cake: because even though I was a coward and I loved being in the truck, I still found myself delving into the haunted house more than once, and often found myself being hunted by ghosts, to my extreme displeasure.

See, I could have stayed in the truck the whole round and been one happy camper, pun intended. But as sanity started to drop and ghost attacks became more frequent (the lower a player's sanity, the more likely they are to get hunted by the ghost), I knew that there were other people who needed to take a "turn" in the truck. I had high sanity and we had tasks to complete, dammit, and that meant I had to swallow my fears, grab my own flashlight, and delve into the horrifying locations we've been asked to explore.

There's just enough work that, while three people can do it, having a fourth person in the wings ready to collect those last few bits of evidence can be the difference between victory and defeat. So out of a desire to win and avoid letting my friends down, I would go inside and try to help. Getting EMF readings. Setting up cameras. Cowering in the corner and looking away from my screen whenever the haunting would begin. 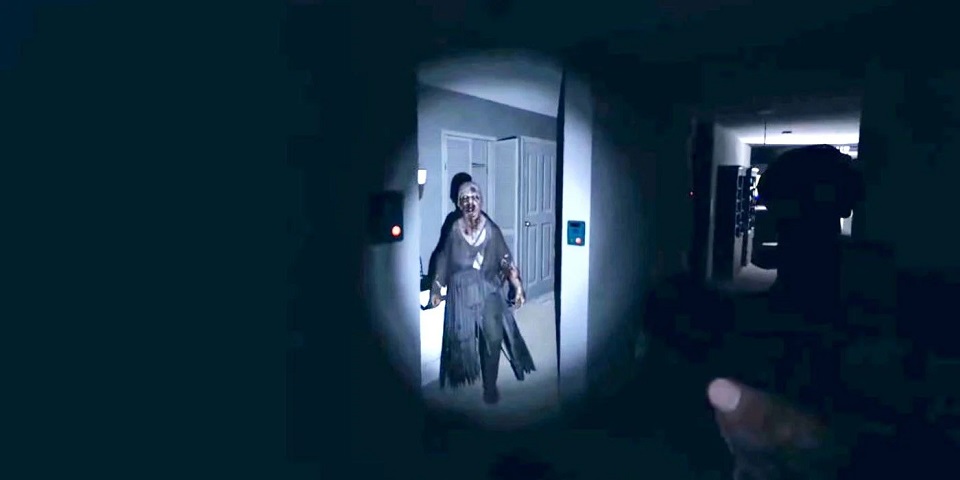 I never enjoyed going inside the houses. Heck, I got the biggest scare I had in years playing that game, slowly walking towards the open door leading outside, just to watch it close in my face and click, signaling the start of a new haunt. One time I tried to help bring some friends a camera, and I found myself getting really lost and angrily cursing my pals while they tried to guide me to safety.

But while I didn't even begin to enjoy myself, I can sure as hell respect the factors that got me to make the terrible decision we swore we'd never take if we were actually in a horror movie.

And it all starts with that brilliant, well-lit truck.