Parry this you casual.

by pocru on Mar 22, 2020 @ 01:10 AM (Staff Bios)
Comment(s)
So, in case you weren’t already aware for some reason, despite being an American I don’t actually live in America, thank god. No, I live, work, and play in the ol’ Czech Republic, who, thanks to being very close to both Spain and Italy, made the incredibly smart decision to lock down hard and fast. Last week we entered a national emergency, and a few days later we had a nation-wide quarantine, making it illegal to leave the house unless you’re doing some very specific chores or activities. And while I applaud their decisive, fast action in the face of this pandemic, it also means I’ve been locked in my house for the past two weeks now, at least at time of writing. 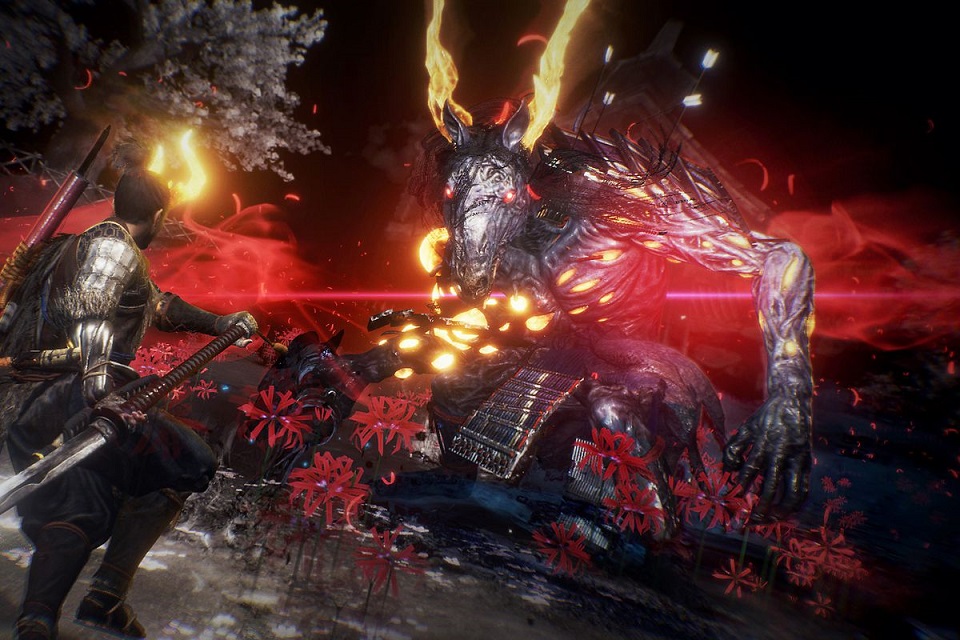 And while, by now, I’ve almost certainly started playing through Doom Eternal, I started my government-mandated quarantine with another game I’ve been very excited for, Nioh 2. And since I write these articles about a week before I eventually publish them, that’s what we’re going to be talking about right now.

Specifically, we’re going to be doing the one thing you’d probably expect with any conversation about Nioh 2: we’re going to compare it to Sekiro: Shadows Die Twice.

And I’m going to explain why it’s better.

First, some background. The first Nioh was released in 2017, and it was immediately hailed as “Dark Souls, but in Japan”. And they’re more-or-less right. It was a historical fantasy soulslike where you played as William, a character based on the real-world figure William Adams, who in this version of events could see spirits and fought giant demons and battled against Edward Kelley in the backdrop of the Sengoku period of Japan. The story was kind of cool from a historical fiction standpoint, as you would encounter other real (and not-so-real) figures from that period in Japan’s history, but what made it really shine was the fact that it took the Dark Souls formula and enhanced it with a mix of Diablo-like item management and a “stance” system in combat, which we’ll talk about more in a bit.

Anyway. Not too long after Nioh came out, Sekiro: Shadows Die Twice was announced and later released in 2019, which was a big deal because people assumed that “Dark Souls in Japan” was Nioh’s whole thing and Sekiro would just be that, but better, since it was made by the same folks behind Dark Souls, specifically Hidetaka Miyazaki and From Software. But upon actually playing it, the similarities are skin-deep, at best. In fact, Sekiro had very little in common with it Dark Souls itself, as you played a pre-made character who focused on stealth and parrying, instead of allowing you to customize your character to your preferred playstyle. 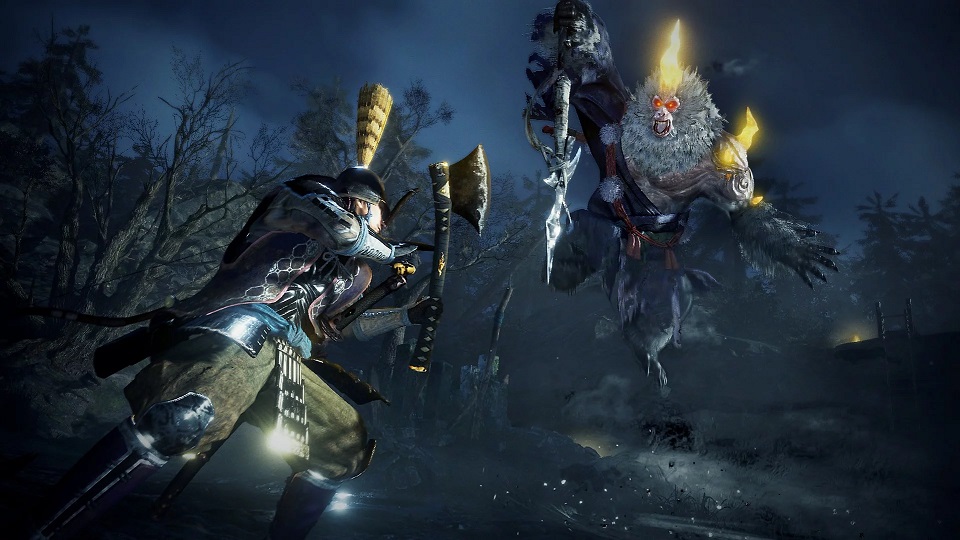 But what really made the two games different was how they approached their primary mechanic: combat. And while both systems are shockingly deep and challenging systems, and both challenge players to be reactive and intellegent, having played both Sekiro and Nioh 2, I can say, unequivocally, I like Nioh 2’s approach far, far better.

Let’s start this comparison with Sekiro. In Sekiro, as I mentioned before, your primary tools are “not being seen” and “parrying”, but obviously it goes beyond just that. When you find yourself in combat, you have to deal with two bars: the health bar and the “Stance” bar. Deplete either and you win – either from outright killing them, or opening them up for a “killing blow”, which will do pretty much exactly what it says unless it doesn’t. You damage these two bars in two ways – the first is with light and heavy attacks, but the real meat and potatoes of Sekiro’s combat is via parrying.

And if you thought parrying in Dark Souls was hard, you ain’t seen nothing yet. “Blocking” conventionally exists in Sekiro, but it’s expensive and ineffective in most situations. Instead, you need to master one of the many different kind of parrys in the game: you can vanilla parry a standard attack, you can jump to parry a sweeping attack, and you parry a stab by dodging at exactly the right time. With each successful parry, your opponent’s stance bar drops significantly… but it also recovers quickly if you ever let up your own attacks, so every combat in Sekiro is a furious dance between you and your opponent, with you attacking every chance you get and reacting perfectly to every one of their counter-attacks. In this respect, a perfectly-done fight in Sekiro is nothing short of elegant, and just maybe the most satisfying combat in all of gaming… if it’s perfectly done. Which, if you’re anything like me, it almost never is. Especially if you can’t read Japanese and you don’t know which character is what when they try to warn you about a grab, stab, or sweep.

If you’re not the kind of psychotic perfectionist you need to be to master the ‘rhythm’ of Sekiro, you’re going to have an incredibly rough time. Tools on your prostatic arm can help bridge parts of the game you’re weakest at, but there’s literally no alternative to the parrying mechanic. Either get good or shove off. Those are your two choices.

Nioh 2 has a similar “reaction” style of combat, but rather than focusing entirely on different kinds of parrying, it uses something else entirely: the aforementioned ‘stance’ system, and Ki. 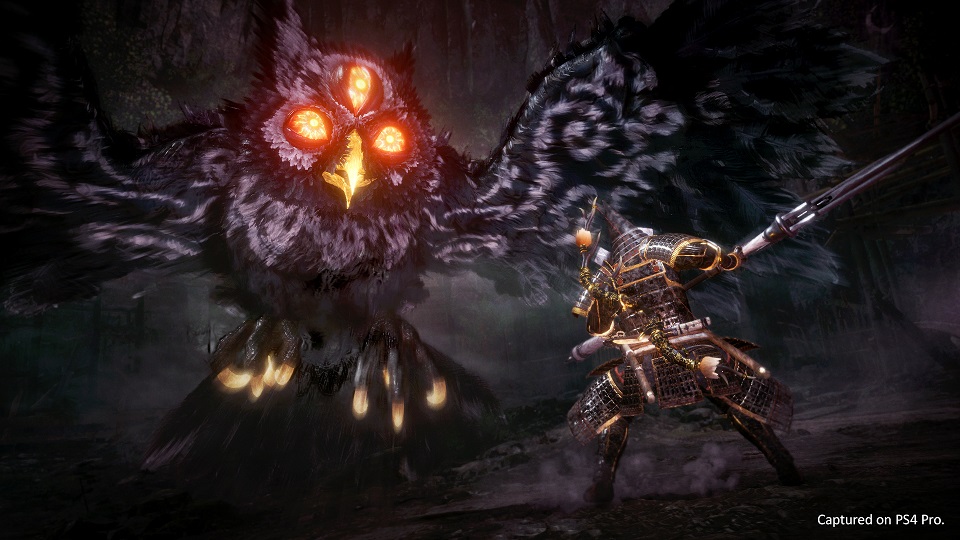 The stance system, which warrants its own paragraph, is present in both the first game and it’s recently released sequel. In addition to there being multiple weapon types, you can hold each weapon in one of three stances: the high stance deals a lot of damage but is slow and can leave you vulnerable. The middle stance allows for powerful strikes and improves your blocking. The lower stance lets you attack quickly and dodge easily, at the cost of damage. Picking which stance is best for the situation you’re in and the enemy you’re facing is key to success in Nioh 2, and switching between the stances as you battle is an equally stimulating but less reaction-based way to hammer down your opponent’s health and stamina.

The Ki system is deceptively simple: you swing your weapon, you hit L1 at the right time, and you regain your Stamina a lot faster than letting it regenerate naturally. This takes the otherwise arduous task of managing your stamina and turns it into a key part of the combat’s rhythm: careful L1 taps between swings and combos can allow you to wail on an opponent nearly endlessly, assuming you’re still being smart about positioning and the vulnerability of your opponents, as Yokai (the primary enemies you fight) don’t stagger unless you deplete their Ki first. These Ki bursts also let you dispel negative zones around demons, which would otherwise slow down your stamina’s recovery.

If these were the only differences, I would say that Sekiro does combat better. But what drives Nioh 2 to the top is the added layer of customization the game allows. And I’m not just talking about the character creator, although I do greatly appreciate that too.

In Nioh 2, you just have a lot more tools than you do in Sekiro. You can use certain magic to buff your weapons and your defenses before a fight. You can use “ninjitsu” to create bombs, throwing stars, and other tools that can distract and disable your opponents. You can infuse yourself with up to two “Oni Souls” that allow you to spice up your attacks with some moves borrowed from the Oni you’ve slain – kicks, grabs, thrusts, and even summons that can absolutely turn the tide of battle. You can parry if you want, and each different weapon type has different kind of parries. Oh, and instead of being stuck with one sword, you can pick between a number of different weapon types – from hammers to spears to scythes and more – each that comes with its own unique move set and strengths. In Sekrio, if you find yourself in a corner, your only option is to ‘git good’. Nioh 2 gives you the options you need to instead approach challenges differently… even if it’s just to summon help like a wuss. 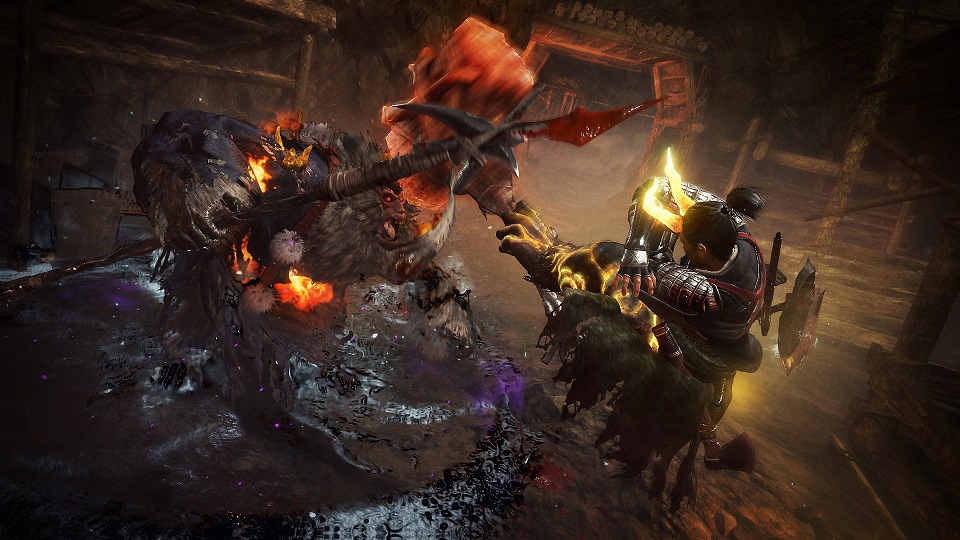 Moreover, I’d say that Nioh 2 has a lot more clarity in its combat that Sekiro. The times you need to do a special “Spirit break” parry (which can’t be blocked or parried normally) is clearly marked with an enormous red glow, which is a lot easier to understand than Japanese characters I can’t read. Everyone who tries to grab flashes black, so you know it’s time to dodge. You flash white when you need to do a Ki Break. It’s just easier to know when to do what, and so it’s harder to blame the game for screwing you when you know you just didn’t react fast enough.

Anyway, it’s genuinely a great game, and I would recommend playing it. If you’re not playing Doom already. Which I assume we both are.