It works really well, in fact.

by pocru on Mar 21, 2021 @ 03:10 AM (Staff Bios)
Comment(s)
Okay, the semi-obligatory review of Legends of Runeterra has been posted, which means we can move on to the next big-ish game I’ve been playing as of late: Loop Hero!

Loop Hero first got my attention at AGDQ 2021, where it was one of the many games that its publisher, Devolver Digital, decided to advertise in the bottom left corner of the stream from time to time. A quick look at the steam page, and in the “popular tags” section, I saw both “deckbuilding” and “roguelike”, which was everything I needed to be excited for it. I played the demo, bought the final game, and I’ve sunk about 50 hours into the title so far, which means I feel fairly qualified to talk about what exactly is on offer here.

Because it’s not really a roguelike deckbuilder. In fact, it’s a little hard to say what it is. I guess it’s… sort of the mutated lovechild of a city builder, a management sim, and an idle game. But if I didn’t like it, I wouldn’t have sunk over two days of time into playing it. And it must be doing something right, because at present it has over half a million players and over 10,000 “overwhelmingly positive” reviews.

So clearly whatever weird alchemy is at work here is doing its job.

In any case, the story of Loop Hero is that, one day, a Lich descended from the skies and destroyed the world completely. Like, absolute and utter annihilation. Creation was unmade. The end. 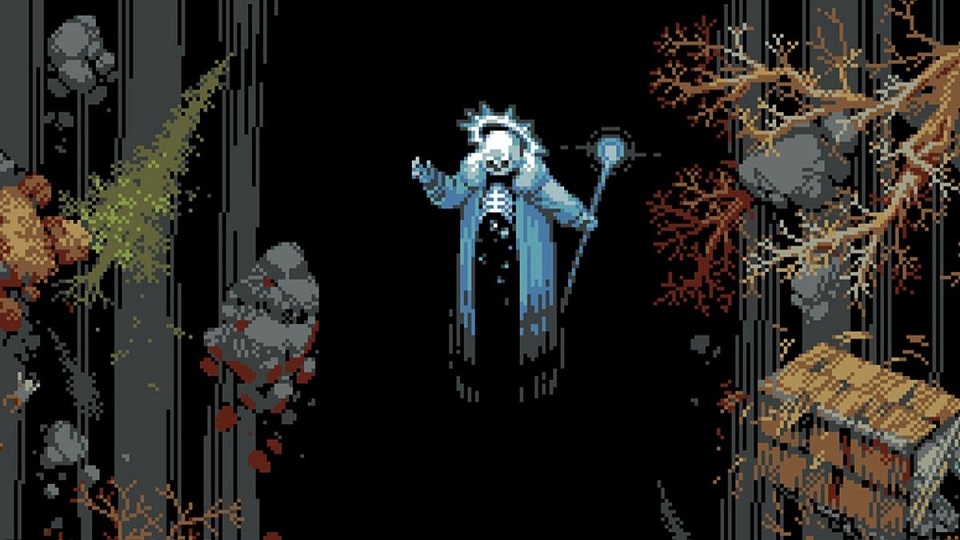 ...except it wasn’t. Seemingly out of nowhere, your character, a traveler of some sort, just explodes back into existence, and starts faintly remembering things. And as they remember things, they discover they have the semi-unique ability to un-destroy them, recreating reality where there was once void. So they start doing just that, until they get the Lich’s attention, and things start to get spoilery from that point on. I wouldn’t say going into the plot unspoiled is terribly essential to the experience — there’s not actually a whole lot of it going on, and there’s only a handful of important characters — but the setting is undeniably unique, and a lot of care has been taken to creating both a past world that’s richly detailed and surprisingly nuanced, and a current world that feels as if it’s just a spot of creation in a void of forgotten nothingness. You’re not likely to find anything else like it in fiction, and out of respect for that, you’re probably best going in unspoiled.

Besides, I couldn’t even spoil the whole plot if I wanted too — I haven’t even beaten the game yet.

The gameplay of Loop Hero is where things get interesting. At the start of each expedition, you find yourself on a randomly generated closed path — a loop, basically hence the name. At this point in the game, there’s only three things on the path: your character, who moves along the path automatically, the campsite, which marks the beginning and end of each loop, and some slimes, which you fight automatically when you run into them.

Kill some slimes, and they’ll drop loot, which will either be items, which you can equip onto your character to increase their stats and make them better at automatically killing enemies, or “cards”, which will go into your hand and wait to be played. Unlike most Roguelikes, these cards aren’t skills or attacks or anything that can directly affect combat. Rather, they’re landmarks: forests, swamps, vampire-filled mansions, towns, fields, ect. And instead of playing them during combat, you play them on the empty map, slowly fleshing it out with new things to see, new enemies to fight, and new locations to visit. Which is where the game’s loose “city-building” elements come into play. 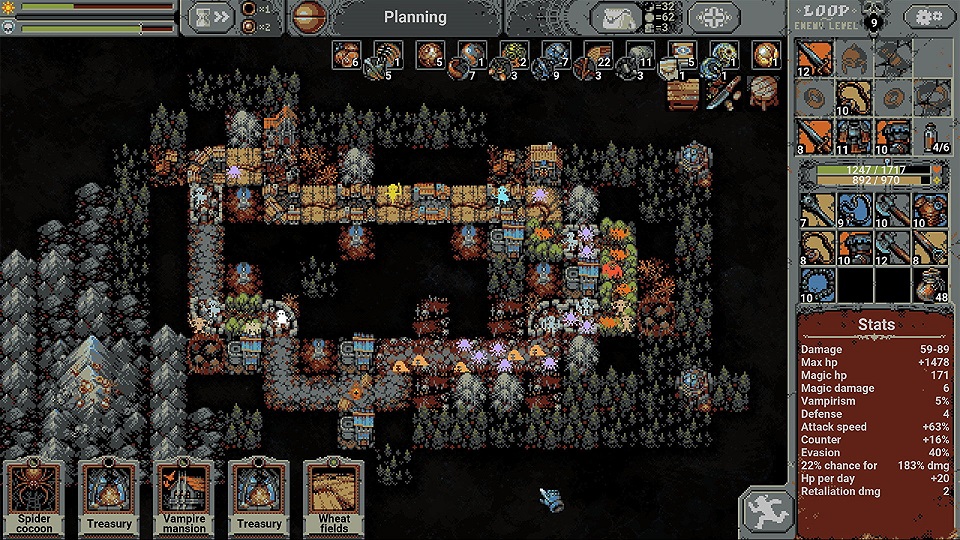 Every landmark you play changes the world a little bit. The most numerous are landscape cards— forests, mountains, rivers, meadows, ect — that you can place anywhere not on or adjacent to the road your character is walking on. These are generally the most boring but useful tools in your wheelhouse, as the more are on the field, generally the stronger you are. Forests increase your attack speed, mountains increase your HP, meadows heal you at the start of a new day, ect. As you play them, you also get resources, which will be important in a bit.

The next kind of landmark is roadside cards, which can be placed next to the road, as the name might suggest. These are things like vampire mansions, battlefields, spider dens, libraries — generally speaking they somehow modify the road they’re adjacent to. So any road tile adjacent to a vampire mansion, for example, will buff enemies that spawn there to have some extra life steal, and will spawn a vampire to fight alongside them. Spiders nests will spawn spider enemies on adjacent tiles, which you’ll eventually have to fight. Smithies will take some of your unused equipment and give you a defensive buff every time you pass an adjacent square… but can also spawn golems once they take enough of your stuff, which cause problems when you run into them.

The final kind of card is Road cards, which, as you could probably guess, you play directly on the road itself. These include towns, which can heal you and give you quests, groves, which spawn ratwolves, swamps, which spawn mosquitos and turns healing into damage, cemeteries, which spawn skeletons… mechanically they’re very similar to roadside cards, in that they can buff, debuff, and spawn enemies. The only real difference is where they’re placed on the map.

So as you kill slimes, you get more and more of these cards. One might think it would be wise to avoid playing the cards that make your run more difficult, like spiders nests and vampire mansions, but it’s not that simple: stronger enemies drop better loot, which you need to survive the boss fight at the end of each expedition. Plus, they drop improved resources, which is another thing you need if you want to upgrade your camp when you finish your expedition. So it’s less about avoiding playing landmark cards, and more about placing them down intelligently. For example, placing swamps next to the vampire mansions so the enemies that spawn there kill themselves with their own lifesteal. Or putting town on the opposite side of the loop from your camp so you get a much-needed health boost at the hump of your journey. 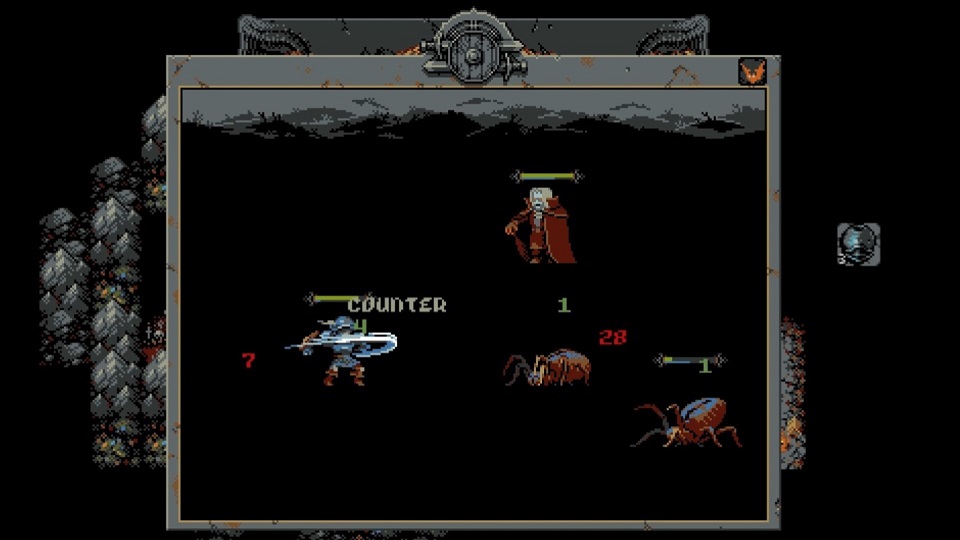 Time also passes as you play: about a minute in real-life time translates to a full “day”. Days are mostly only used to measure when enemies spawn, or when you get certain buffs. A lot of cards have a “new day” mechanic, where they either spawn or trigger after x many days pass.

In any case, you continue to automatically move forward, placing cards and killing enemies, until you reach your camp. At which point, you heal up, get more health potions (if you have the right buildings for it, anyway), and the loop counter goes up by one, which increases how strong enemies are. This continues until you place down enough landmark cards to eventually summon the boss of that expedition. Then you fight, and win or lose, you’ll take some of the resources you’ve collected from placing cards and killing fools (or all of them, if you beat the boss first), and you go back to camp.

The camp positions itself as some kind of city-building sim, but mechanically, it’s just a complicated menu that lets you upgrade yourself with some persistent buffs that will make the next run easier. Using the resources you’ve acquired, you can build stuff that will unlock new classes (there are three in total at time of writing, but more are planned in future updates), unlocks potions that will give you a lil’ healing buff when you need them most, unlock new landmark cards you can use in future runs, and other such things. You can also build homes, which let you equip special “supplies”, which give you small but meaningful buffs that add up over time, like extra health regen, improved HP, a better chance to find rare items, and so on. There are also buildings, like the lumberjack’s house and farm, that produce extra resources for you after every expedition, which is a good way to make sure you always have the essentials with you. 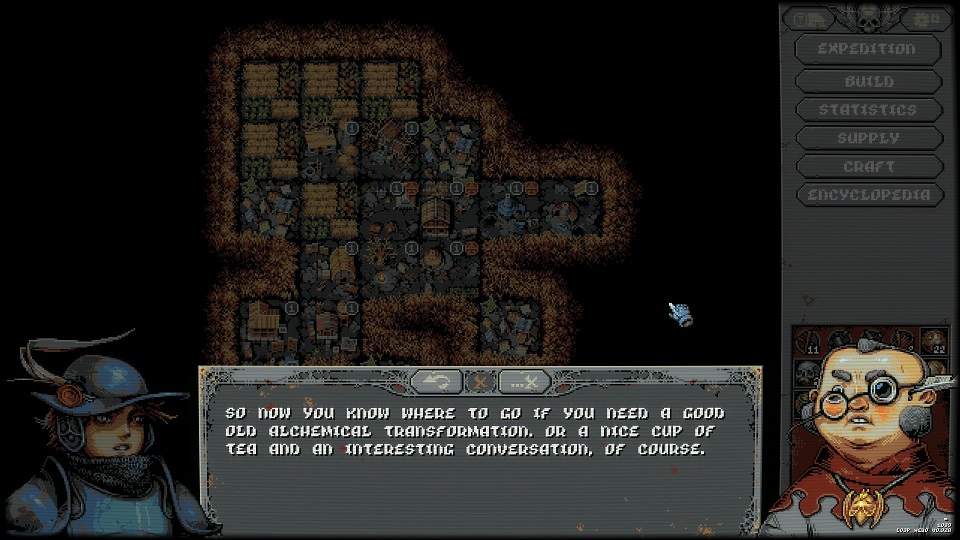 So you spend your resources, build and upgrade your camp, then after you build a new deck of landmarks (You can only bring so many, or so few, which determine which you’ll get as you travel) and you go out on a new expedition. Rinse and repeat until you’ve been playing for 40+ hours. And if you find it kind of surprising that a game like this could be so addictive, well… you’re not wrong.

It’s not that the game is perfect, either. There aren’t a whole lot of landmarks to choose from, so it’s not so much building a deck as you are picking which ones not to bring. And while it can keep your attention for a long time, and has moments of “just 5 more minutes” when you’re in the thick of it, it’s also not that grabbing in the short term: you do an expedition or two, you get your fill, and you set it back down. Plus, there’s a pretty huge difficulty spike near the end, and I’m honestly not sure how I’m supposed to beat the game, even with most of the camp unlocked and upgraded.

But all-in-all, I’d call this a damn good game. Not a masterpiece, and nothing that will change your life. But if you’ve got time to kill, Loop Hero is up to the task.