Let's Make Fun of the Sonic the Hedgehog Trailer

Just because we know Sonic is getting fixed doesn't mean the trailer is less terrifying.

My first Sonic the Hedgehog game was Sonic Adventure 2 Battle, which most people agree wasn’t a GREAT game, but was probably the best 3D sonic game made, at least until Colors and Generations came out. But for me, inexperienced and starstruck by Sega’s iconic mascot, I fell in love. Sonic deposed Mario as my favorite video game character, for a time, and I would wait for every single new Sonic release and buy it the moment I could. I even got all the anthology collections, even though I never had the patience or the skill to finish any of them. I was, in short, a Sonic megafan.

Since then, my attachment to the blue blur has chilled. I still have a nostalgic fondness for him, and I pay attention to the games that bear his name in the hope that one of them will finally convince me to give him another chance, but it’s still been years and years since I actually played one. I think it was… Sonic and the Black Knight? Yeah, I’m pretty sure that was the last Sonic game I played, although Sonic Mania was extremely tempting.

Point is. I’m a fan. I’ve got love for Sonic the Hedgehog. A genuine affection. And I care about what happens to him.

So let’s talk about this goddamn trailer.

At time of writing, of course, we’ve been blessed with the knowledge that apparently the director has heard the outcry and is willing to change Sonic’s design, something probably only possible because he’s entirely CGI. I’m still half-convinced that statement is some kind of set-up for a joke, but we could also probably take him at his word: because the outcry to this was nothing short of phenomenal.

Can't wait for the furries to write degenerate suffocation erotica fanfiction based on the scene where Sonic is in the sports bag.﻿

This Sonic looks like the concept art that the lead character designer drew as a joke but some CEO found it in the trash while throwing away his iPhone XR after he scratched the screen and said, "Hey this looks great." And everyone was like, "Listen Paul that's not an option, bud." And Paul said, "Who's paying for this again?"

Well Paramount you at least gave us a excellent meme material.﻿ 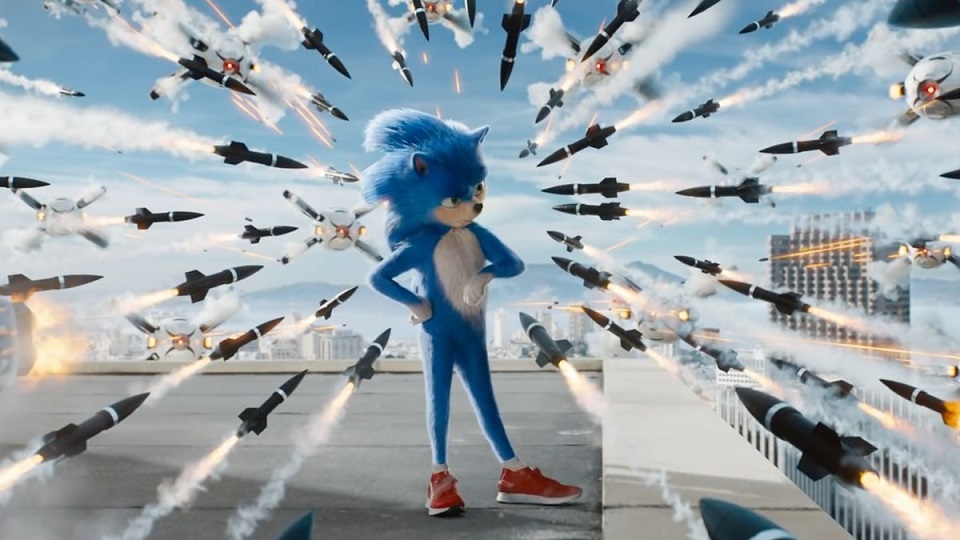 Which, I think, is important to start with. Because while I did feel something like genuine pain and heartbreak when I saw this trailer, I also felt a sort of stupid, crap-eating joy at this absolute abomination that Paramount was proudly slapping down in front of us. It’s like seeing new parents doting on their absolutely hideous spawn and then holding it up to you and asking what you think is the cutest thing about them. And you sort of panic because this… creature is breathing on you and you can feel the breath and it’s so ugly and uncomfortable but it’s also kind of exciting because it’s living proof that if there’s a god they must have a pretty great sense of humor.

Because there is a lot to make fun of in this trailer. And you’re damn well sure I’m going to even if it’s not “representative” anymore.

For one: the teeth. I think I could have forgiven the creepy mutant furry legs or the lack of fur or the two-eyed thing. I could forgive that apparently Sonic is just Pikachu and has electricity powers now. I could even maybe (although this is a stretch) forgive that he sounds nothing like Sonic the Hedgehog is supposed to sound like? But the minute he opens his mouth, and we see those flat, white, human teeth in his weird hedgehog mouth… it makes me cringe. Like… look at those teeth. Those goddamn teeth. 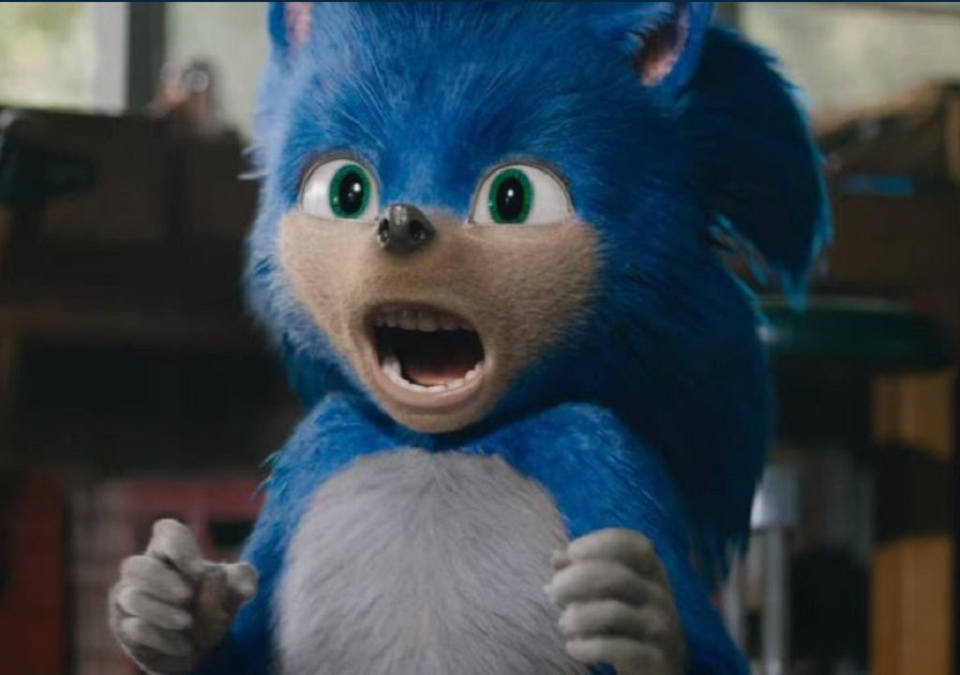 Those teeth are made for gnashing. They are human teeth, omnivores teeth. But look at him. Sonic could eat vegetables, but he won’t. He eats fingers. You look at that thing and tell me he doesn’t eat human fingers every day. He just goes into people’s houses, middle of the night, finds whatever arms are hanging off the side of the bed, and without laying a hand on them, opens his mouth nice and wide and bites into their fingers. Chews on them for minutes at a time until they’re a fleshy, boney pulp in his white-and-blue cheeks.

And there’s another thing: the nose. For all the things people have rightfully said about the eyes and the furry limbs and the furry thighs and those finger-chewing teeth, let’s not forget his nose – a nose he presumably breaths out of – is uncomfortable too. It’s like a pimple. A big, black pimple with two holes at the bottom. Imagine that thing brushing against you. Dry and bumpy. Imagine trying to boop it, like you might for a dog or a cat. Imagine how Sonic the Hedgehog would then eat your fingers for daring to bring them so close to his mouth, a place so alien and evil not even God could reach you from there.

But okay. Enough about how monstrous Sonic looks. When he’s in motion, he’s only occasionally terrifying. Let’s go on to the lightning round, pun intended: 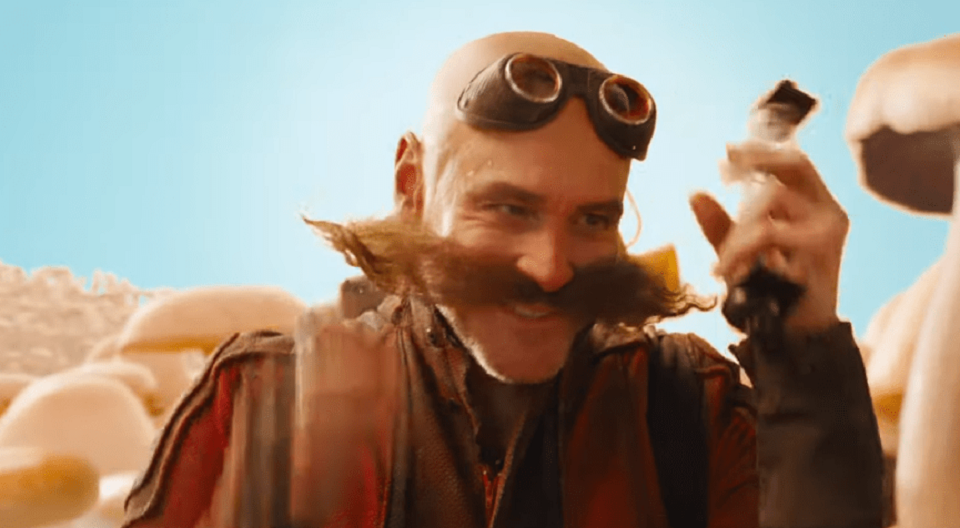 We could go on. Of course, as I said before, we don’t have to, since Sonic is getting redesigned to something a little less awful (we’re told) and really, even if they just fixed the finger-pulping teeth the movie will be 100% better. But here’s the thing: even if they really are going to redesign Sonic back to something a bit more authentic, my question is: who made the call to turn him into this mutant in the first place? I have two theories.

First, is Sega itself. It’s easy to forget, but one of the chief complaints about Sonic ’06 was that many people thought it looked weird for Sonic to be next to more realistic humans. This was amplified by the weird… inter-species romance thing they had going on? But look, all that aside, I think Sega remembered that particular feedback and maybe took it when them when they sat down to negotiate this movie deal. They wanted to try to re-design sonic (something they’re not against intrinsically, if you’d look at Sonic Boom) to avoid that controversy, and in the process, made it worse.

Second, logically, would be Hollywood itself. For as much as people like to draw parallels between Detective Pikachu and… this… that’s kind of unfair. They had to have been planning this well before the Pokémon trailer was released, so it’s not as if they had some sort of twisted inspiration from the now iconic designs in Detective Pikachu and decided to try it for themselves. What’s more likely is that the logic that the marketers and executives behind both of these movies followed the same Hollywood wisdom: whatever the game industry is doing, we can do it better, because this is our turf and our town.

And sometimes, they’re right: I think the more realistic-looking Pokémon will be enormously appealing and a great draw for longtime fans.

…and sometimes, they are very, very wrong… as is the case with this Sonic the Hedgehog thing. If you’re not going to do something right, then it would have been better if they didn’t bother trying at all.

Or, at least, using common sense before the internet blows up over it.