It's certainly a bit steep.

by pocru on Sep 05, 2020 @ 04:41 PM (Staff Bios)
Comment(s)
A lot has been going on in the gaming space these days, so I wasn’t able to prioritize posting a new article about the latest Legends of Runeterra update in a more timely manner, but I figure now’s as good a time as any since, honestly, I have an incredibly busy week ahead of me and I needed to write this on like Monday when I had the free time. So if something more important happened in the intervening days… sorry. This is the reality of being a part-time games journalist on a small-ass site.

But moving right along, Legends of Runeterra had its second big update since launch: Call of the Mountain. If you recall, I reviewed their first big update, Rising Tides, and I said that while it was a fun and welcoming addition to the game, it also added an extra layer of complexity that threatened to destroy the ease of play and simplicity that made the game so appealing at launch. And I’m happy to announce that with Call of the Mountain, Riot Games has officially obliterated that appeal. Legends of Runeterra is officially every bit as confusing and convoluted as every other digital collectable card game out there, but at least the art is still pretty.

Anyway. Call of the Mountain focuses on one of the more interesting and unique regions in Riot Game’s fantasy world, Mount Targon: a legendarily huge mountain that acts as a bridge between the mortal world and the world of pseudo-divine celestials. Two tribes, who worship the sun and moon respectively, are at war with each other. Dangerous beasts roam the snowy peak threatening those who make pilgrimage to the mountain’s peak. And flighty creatures from beyond the stars threaten total oblivion to those who dare stand against their unknowable machinations. Also there’s a sassy dragon.

Targon itself is perhaps the most convoluted region out there: whereas Demacia focused on momentum and keeping your powerful units healthy and strong, and Bilgewater focused on indirect damage and pillaging cards, Targon offers players a day-night cycle, invocations, and support focus.

Support is probably the easiest to lead with: in Legends of Runeterra, there are cards that can “support” adjacent attacking allies, buffing them or giving them extra abilities that can give them an edge in combat. Targon offers a few iconic support cards, no more iconic than a new champion known as Taric. His ability lets him grant both himself and his ally toughness during combat (so they take one less damage in combat), but it also means the last single-target buff you gave Taric will also go to his supported ally. So if you gave Taric a +2 in HP with a spell, his ally will also get that buff. It’s a mildly frustrating mechanic to play against (especially when Taric levels up, which makes both himself and his supported ally immune to damage when they attack) but he’s complimented with a number of other support cards that make it even more annoying to deal with.

It only gets worse from here, kids, buckle up.

The second thing Targon offers is invocations and celestials. Normally, you can’t stack your deck with celestial cards, which are heavenly creatures and spells of great and terrible power. Rather, you have to play another card that allows you to “invoke” them, which means three random celestial cards will appear in front of you and you have to pick which of the three you want to add to your hand, which you can then play as normal. Celestial cards, in short, tend to kick butt and steamroll the more celestial cards you have. Most of the most powerful celestial cards get buffed the more celestials you have in your hand and in play, so the more you build up your celestial army in the early game, the more powerful they’ll become late game. At least, in theory. In practice, Aurelion Sol, a 10-mana champion (and the most powerful one in the game), gives you a celestial at the start of every turn, and when he levels up (which is insanely easy to do when you’re at the 10-mana stage of the game) every Celestial costs 0, so… most people just pair him with Thresh (who can summon him for free when he levels up, which is also really easy to do) and steamroll. I have yet to see anyone actually try to build a deck around celestials, especially as long as Thresh gives you an easy out. 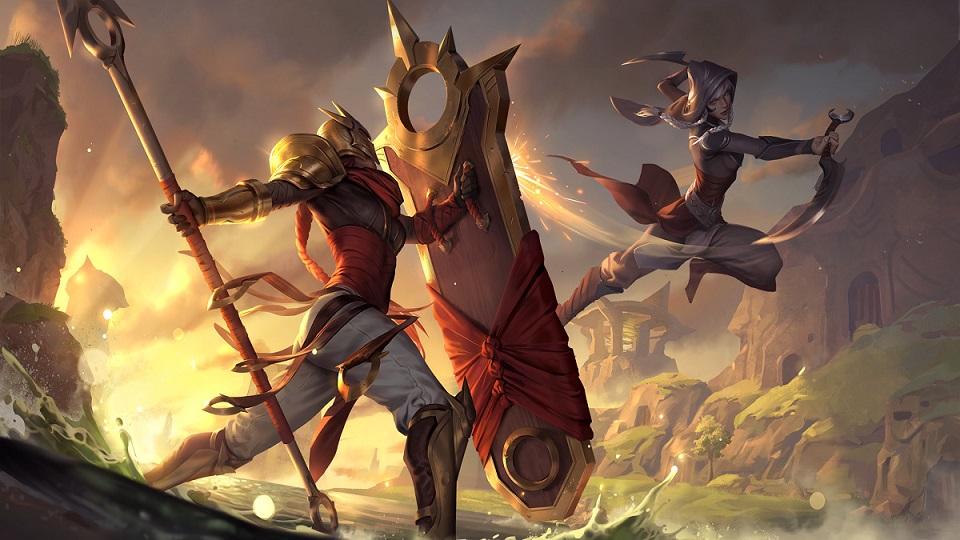 Finally, Targon offers a day-night cycle, which basically means that sometimes its day time and sometimes its night time, and playing certain cards at the right time, day (which is the first card of the turn) or night (any card other than the first), will give them a buff – daybreak and nightfall effects, respectively. Representing daylight we have Leona, who can stun the strongest enemy, and representing night we have Diana, who has quick attack and can challenge foes. Both level up when you activate daybreak or nightfall effects 4+, respectively, at which point they just become better at their jobs as an assassination and a CC machine, respectively. I’ve fought against a few decks like this, and while they can be pretty tricky, they don’t seem as reliable as the good ol’ Thresh-Sol combo.

A few other cards were added as well, for the other regions. The most interesting is Freljord, which got a brand-new mechanic called “Behold”. A card with the “Behold” feature basically gets a buff or an ability when you have a card worth eight or more in your hand or on the field. Strangely enough, most of the new Behold cards are trolls (lead by the new champion, Trundle, who can summon a 8 mana ice pillar in your hand when he’s summoned) which I kind of feel has to be some kind of lore thing? But it’s a good fit for Freljord, who has all those Eldritch ice monsters you can pair this with so you can actually be happy when you draw them, rather than annoyed. 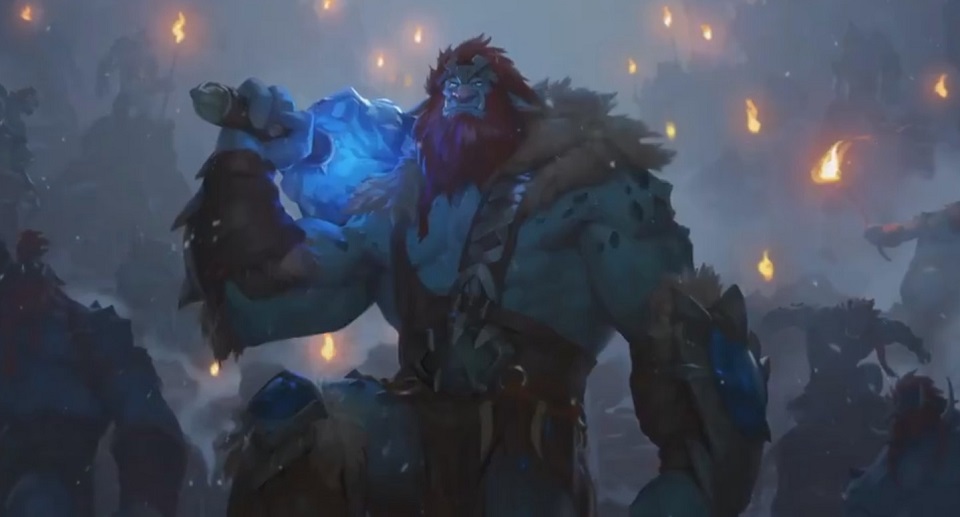 For Ionia we have Lulu, which is basically another support-focused champ. When Lulu supports a unit they get 4/4 for stats, and when she levels up she makes that a solid 5/5. There are a few more support units added to Ionia to complement her, but honestly I have yet to see her be used. After all: she’s only 2/3 herself, and while you might not want to tango with the 4/4 beats she creates, nothing really stops you from wailing on the yordle herself. 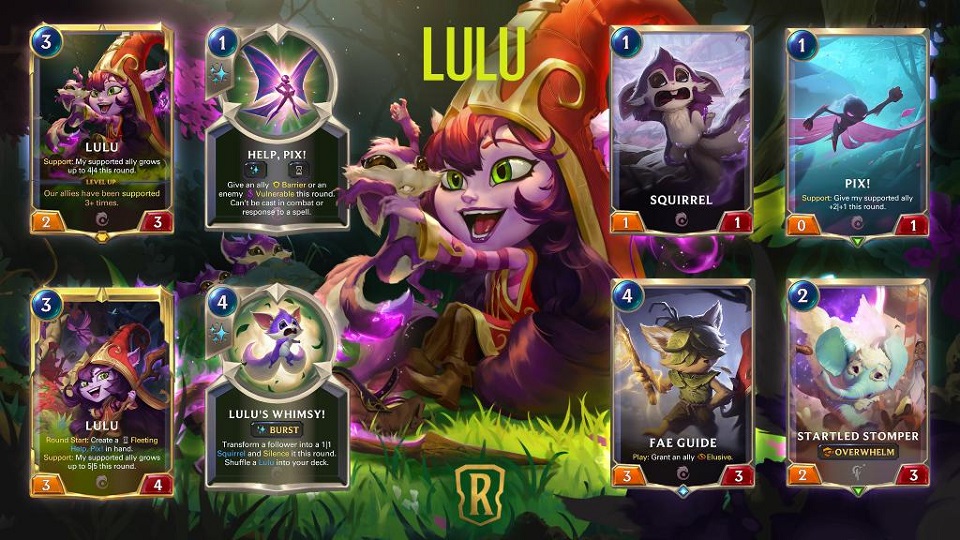 The final new champion added to the expansion is Nocturne, who basically adds “nightfall” mechanics to the Shadow Isles. Nocturne himself has fearsome, can force enemies into combat with “vulnerable”, and lower their attack stat by -1. Once he levels up by attacking with nightfall creatures, every time he you summon a nightfall beast, all enemies get -1 attack, while all allies get fearsome. So by playing a horde of nightfall creatures you can basically weaken enemies to the point where they can’t block your attack, and paired with the fact that there’s a whole slew of new “Draining” cards in the Shadow Isle, you can create a pretty problematic combo.

But wait, there’s more! Because two more mechanics were added to the game that are not unique to any particular region: the first is spell shield, which blocks the first spell or card effect that targets the unit specifically. From what I can tell it doesn’t block EVERY card or spell effect, which is confusing, but it does block most of them. The second is Fury, which means every time the card destroys another card they get +1 in both attack and defense. Fury cards seem mostly attached to a new subtype known as “Dragon”, most of which are on Targon. It’s possible to build a dragon-themed deck now, although it’s not nearly as comprehensive as building a deck around other subtypes, like Elites or Poros.

Anyway. I’ve been playing mostly with a Trundle/Sol deck, because I like dragons and I like trolls, and so far it’s been treating me alright. Most of my early cards are cards with behold and things that expedite my mana income, so I can play my big ol’ dragons sooner rather than later. It’s not the kind of deck that’s easy to make a comeback with, but when it works, it stomps hard: generally I either lose, or I win to devastating effect, so it’s a pretty fell-good deck as far as I’m concerned.

As for the state of the game? Well, like I said, all those new card effects are a lot to deal with. And while I’m certainly enjoying my time with the game again (I had stopped playing for a few months after Rising Tides grew old) for someone who wanted to just get started with the game, I feel like it would be a little too complicated. I wouldn’t say it’s at Hearthstone levels of complicated chaos just yet, but Targon is supposed to get new champions and cards in the intervening weeks and months, and I could very easily see it tipping past that point in that time.

That said, I can also say that my old decks – the ones I built when the game first launched – still work. So if nothing else, Riot Games can’t be accused of promoting power creep… at least, not yet. Let’s hope it stays that way, because the minute the old cards start feeling obsolete is the moment this game probably will lose one of its best features.

So yeah. That’s my impression.

Scientists to Study People Who Invert their Controls in Games

Genshin Impact's Mobile App Has Been Making $6 Million a Day

In four days they made more than Travis Scott made in 9 minutes.