This is actually a review of sorts.

by pocru on Feb 28, 2021 @ 06:00 AM (Staff Bios)
Comment(s)
I’ve been playing a lot of new games lately, so what the heck — let’s keep this psudo-review train going with another game that feels kinda new even though it’s been around for a while in Early Access: Griftlands! 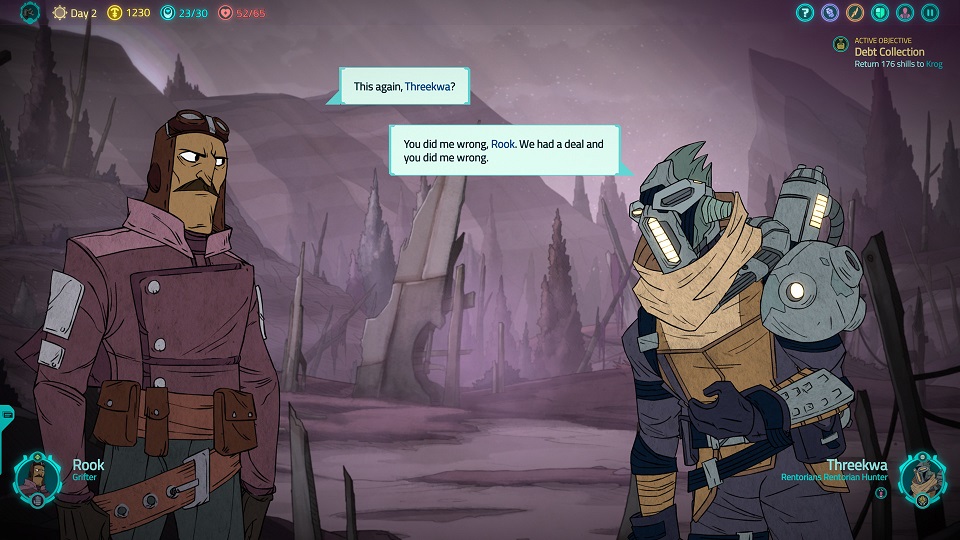 I was attracted to Griftlands immediately when I found it: not only is it a deckbuilding roguelike, the genre I’ve fully embraced I’m addicted to, it’s being made by Klei Entertainment, the folks behind Mark of the Ninja, Shank, Don’t Starve, and Oxygen Not Included. They’re not quite as prestigious as, say, SuperGiant Games, but they’re reliable producers of top-tier mid-range faire that will keep you busy for a dozen hours, and a few more if you try to be a perfectionist. While Don’t Starve wasn’t my cup of tea, I could appreciate how other people could fall in love with it, and Mark of the Ninja, another one of their games I played, remains one of the best stealth games I’ve ever played, perhaps second only to Thief: The Dark Project.

...I really need to play Thief 2 one of these days.

Anyway, Griftlands has more story than your typical deckbuilding Roguelike, such as Slay the Spire or One Step from Eden. You pick one of three characters, and play through a different story in a different location depending on who you pick.

You can play as:While each character plays differently — which I’ll get into in a second here — the core mechanics are the same for everyone. Unlike most deck building games, you don’t have one deck in Griftlands, but two: a battle deck and a negotiation deck. You use the battle deck when it’s time to throw fists, as you might expect, but you use the negotiation deck when you want to convince other people to do something. It’s basically gamifying the process of convincing someone of something.

Battle is actually quite straightforward in Griftlands: it’s pretty much your typical turn-based affair. You and your party wail on the enemy team, with you acting first by attacking with cards you draw at the start of your turn. Once you run out of action points or cards (more often the former than the latter, but depending on how you build that’s not always the case), your allies go, then your enemies go, rinse and repeat until one of you guys dies. You can see what your enemy intends to do so you can block damage, you can inflict status effects that can damage people over time or what have you, and generally there’s not a whole lot to write home about this system. In theory, the most unique aspect of the battle system is that you can choose to spare or kill your opponents either during or after each fight, but generally speaking, it’s universally a bad idea to kill someone unless you have to, as you get unique buffs and debuffs depending on who likes or dislikes you, and killing people makes others dislike you in a hurry. 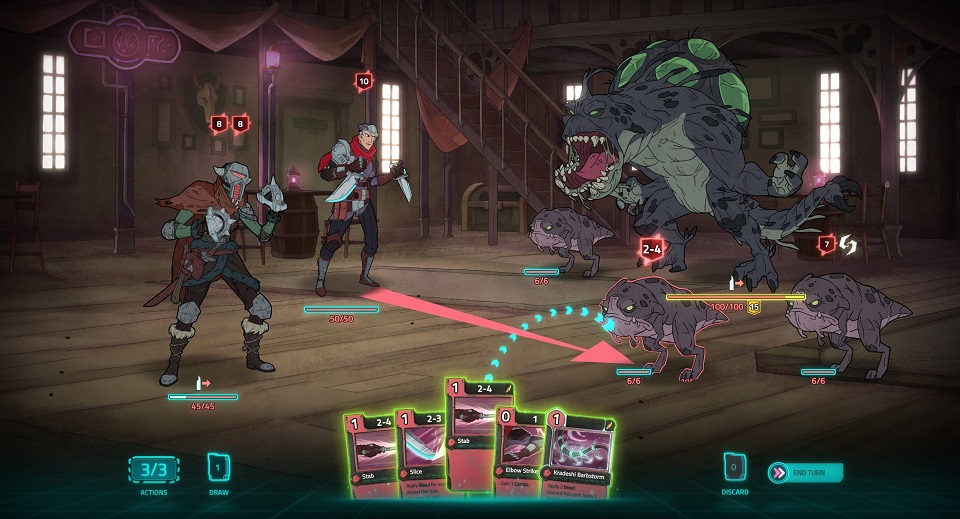 Negotiation is where the game gets interesting: like battle, you draw a number of cards at the start of your turn, they all have an action value, and you keep playing them until you’re either out of playable cards or action points. But instead of attacking a person’s body, you’re attacking their ‘core argument’, which, if you defeat, you win the negotiation. You can damage a person’s core argument with “attack” cards, or you can make “supporting arguments” that can buff you as you negotiate. But your enemy will also make supporting arguments, which you can attack instead of the core argument in order to get rid of the buff or debuff it provides them. It’s a more unique battle system, and what’s more, it’s a lot more engaging than the functional but otherwise unnoteworthy actual combat system they have for throwing fists.

No matter who you play, you start each in-game day, do a little dialogue, then select missions to go on. Different missions give out different rewards, from money (which can be spent buying or removing cards, hiring people to help you, buying pets, stuff like that), grafts (persistent buffs that help you in negotiations and combat), to Mettle, which is a currency you can use to buy persistent buffs that last between runs. But different missions also have different focus: some are focused on battle, and will offer battle-focused rewards. Others, obviously, are more negotiation focused. And there are some that have a healthy mix of both. But every kind of quest generally involves at least the option to negotiate or go into battle, so you can still throw down in negotiation-focused quests and negotiate out of battles. But you want to be skilled at both: there are unavoidable battles you need to win in order to survive, and while you won’t lose the game if you fail a negotiation, the buffs and benefits you get from a successful negotiation can turn an impossible battle into a trivial one.

But each character is different. Sal Fallon, the bounty hunter, plays in Murder Bay, a location full of corrupt “cops” called the Admiralty, a bunch of criminals, most predominantly the Spree, and some cultists. You can build her combat deck towards improvising new attacks (which is drawing random cards from the either), combos, or causing a damage-over-time bleed effect on enemies. In negotiations, her deck is best served focusing heavily on either reliable but small diplomacy damage, or varied but powerful hostility cards. Lean into one over the other, and you’ll generally crush every conversation you’re in. 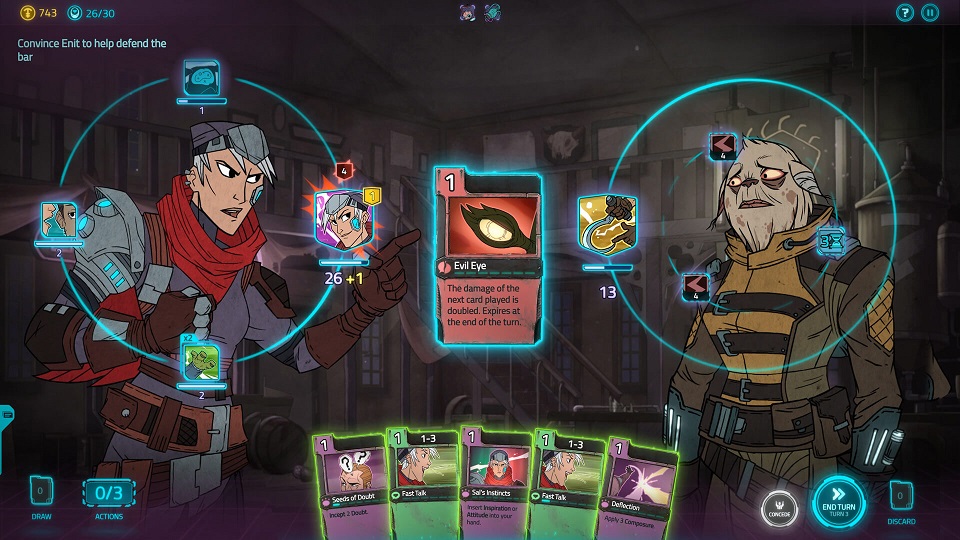 Rook, on the other hand, has his story set in Grout Bog, a huge dig site under the control of the Spark Barons, a group of rich capitalists who work their employees to death fishing old relics out of the swampy waters. They’re resisted by Rise, a plucky group of workers and/or terrorists who will resort to any means to get their rights... which, despite the story’s best efforts to add ambiguity, are still, like, objectively the good guys. In fights, Rook has to manage a charge meter: some cards do better with a full charge meter, while others do better the emptier it gets, so deck balance is a lot more sensitive than it is for Sal Fallon. Likewise, his negotiation decks worry less about if you’re being hostile or diplomatic: rather, you have a coin, and whichever side is showing can trigger different effects in cards. You can flip it fairly often, and even rig it so that a certain side is guaranteed to land with every flip. It’s a lot more complicated than Sal’s system, but setting up a perfect rig into flip into card effect is pretty satisfying. He can also “prepare” cards? Which isn’t a great system because it’s mostly based on luck and what have you, and a lot more to juggle if you play around it.

Smith is probably interesting but I haven’t played him yet.

So would I recommend Griftlands? Ultimately, yes, but there are some caveats.

For one, the story is needlessly cynical. That may or may not be a bad thing by your own personal estimation, and that’s not to say the stories are particularly grim: there’s a lot of good, comic writing and likeable characters. But any time the story gets close to showing you a good person or a charitable situation, they flip it around to make it mean-spirited or bad again. It’s an aesthetic, and I guess you wouldn’t go into a game with a name like “Griftlands” thinking that it was all sunshine and rainbows, but at least some relief from the awfulness, or one or two genuinely nice characters, would have gone a long way to making my time with the game better. At the very least, you almost always have the choice to play a rogue with a heart of gold — even if you might suffer the consequences for it, because everyone else is a dick. 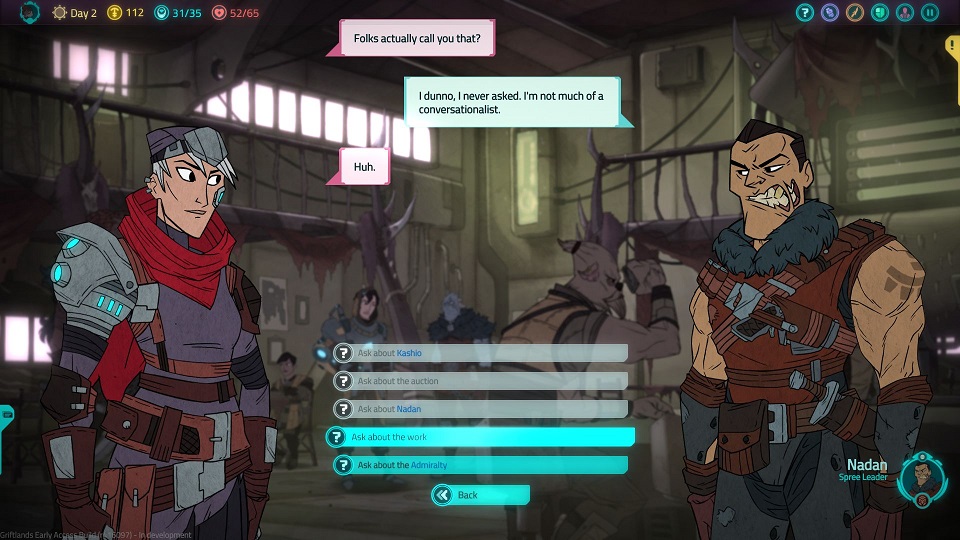 For two, it’s not very hard. That’s a weird thing to point out, but I’ve only lost twice: and both times, it was less because I was in an impossible situation, and more because I didn’t know what I was doing and was unfamiliar with the mechanics. I’ve been able to upgrade the difficulty and do a few runs without much issue, which is fine, but if you’re looking for a real hard time, you’re not going to find it here.

Which brings me to point three: the tutorial is kind of awful. It teaches you the vague motions without really explaining the nuts and bolts that make everything work, but it’s not enough to really understand the game. You need a bit of trial and error to figure everything out, which will probably result in one of your few game overs.

But ultimately, I’d call it really, really good. And definitely deserving of the 10/10 it currently enjoys on Steam. Check it out.