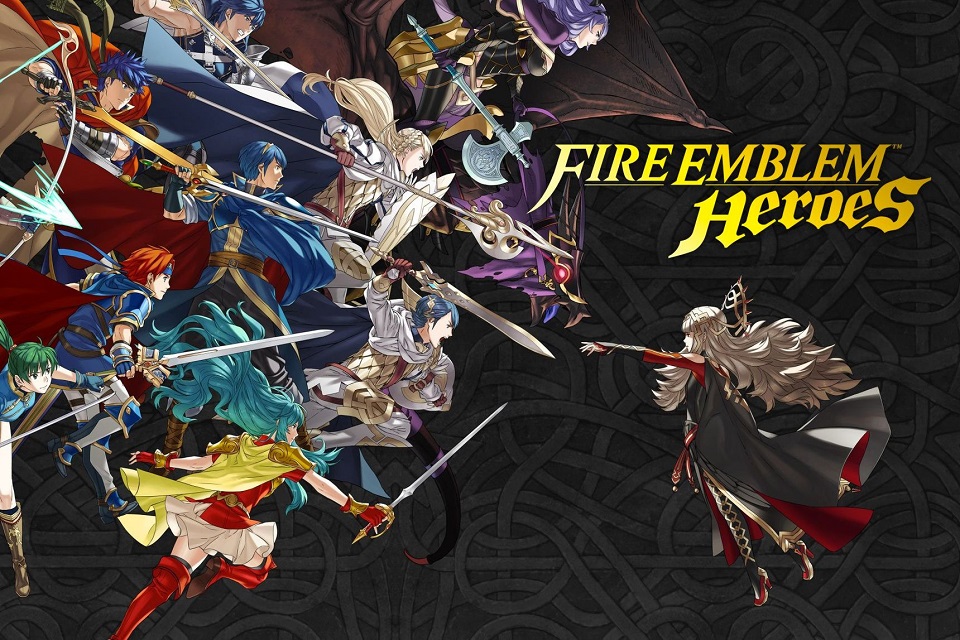 I’m not going to pretend there’s any interesting reason for that. At first, it was because during the advent of mobile games, I had really crappy phones: my very first mobile phone was too weak to even run Skype, let alone play games, and the next phone I got in Europe was a tiny block phone from the 90’s where you needed to scroll to even read a text over 50 characters. I was twenty-five years old when I got my first actual, real smart phone, and by that point my knowledge of mobile games had firmly placed them in the category of “things I just won’t ever do”, like going to homecoming or getting along with my dad.

Even though there was literally nothing stopping me from playing them.

When it finally sunk in that I actually could play mobile games, well, I still didn’t exactly find the prospect endearing. I had a Nintendo 3DS that I played instead when I was on the road, and once that got tired (both for myself and Nintendo, who seems pretty keen on letting the platform die) I just started reading, which was a hobby I had let fall to the wayside for far too long. While I was still aware of mobile games, I was also aware of their… reputation, let’s say, for finding new and innovative ways to milk users for all that they’re worth. All those factors combined, for as much as I loved games, I was more than willing to not explore that particular faucet of the gaming world.

Indeed, I was never under any inclination to play mobile games… until we reported that Nintendo was going out of its way to avoid the abusive monetary schemes that so often plagued games on phones and other mobile devices.

The very same day we reported that news, I downloaded Fire Emblem: Heroes.

I start this with that preamble because I want to make it perfectly clear going into this that I have almost no experience with other mobile games, so I’m not really in any position to gauge the game’s quality in that sphere. Besides, the game is really, really old by now, and if you were looking for a review that tells you how it plays and can tell you how it compares to other mobile games, there should be no shortage of resources for you to call on. So no, I’m not interested in trying to critique this game as it compares to others of its kind… 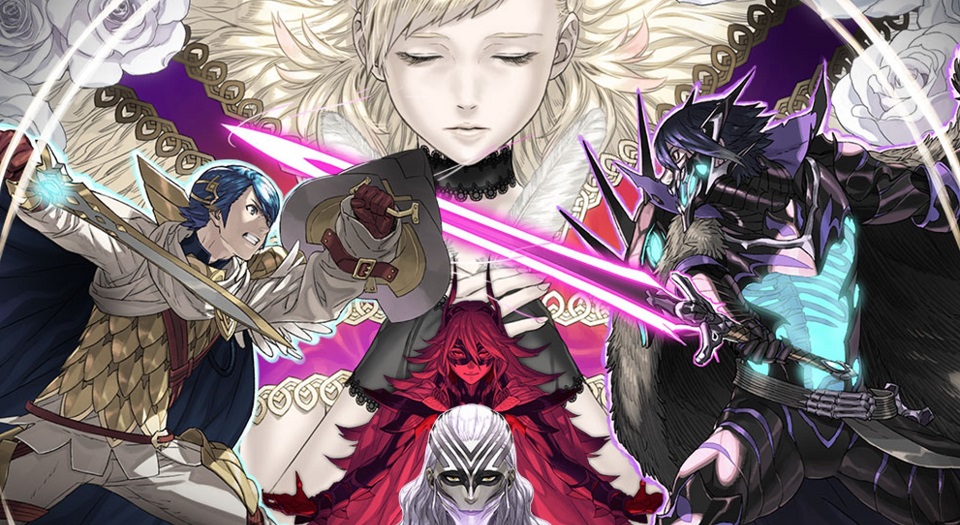 …but I am a kind of expert on Fire Emblem, and I can judge how it performs in that space.

In case you weren’t aware, Fire Emblem is one of Nintendo’s longest-running IP’s, although it’s had a much bigger presence in Japan than it ever had in America. There’s a grand total of ninteen games in the series so far, with another, Three Houses, coming out on the Switch sometime later this year – a game I am so unreasonably pumped for that it has inadvertently lead to the writing of this article. Fire Emblem is a grid-based tactical RPG where you take a party of heroes into battle, where you have to take advantage of weapon advantages, choke points, and really clever positioning to win the day. They also might be the last true remnant of “Nintendo Hard”, as even the best laid-out strategy can be undone with some ill luck, and perma-death (although most characters just ‘run away’) means that one poor decision can cost you your best unit… especially if you’re not save-scrumming.

Nintendo isn’t exactly known for its sweeping narratives, but Fire Emblem is generally the exception to that rule. The plots tend to follow some member of royalty trying to un-screw an extremely screwed situation with a roster of soldiers that can range from knights, peasants, Calvary, mages, and more… which, in most games, you can pair up and make them fall in love, which is the best part of the game by far. Anyway, I wouldn’t call it the ‘darkest’ or most ‘mature’ Nintendo series – we’ve got Metroid for that – but it is a game series where dark gods send the world spiraling into endless bloodshed and your character has to either participate in or witness the slaughter of unarmed civilians.

Because of its huge roster of character and grid-based gameplay, the series was a natural fit for the mobile space, where you engage in small skirmishes with a party of four heroes. It’s a much smaller, much more condensed version if the Fire Emblem formula. And I think gameplay-wise, not only is it more-or-less on-brand, it might actually be one of the best Fire Emblem games I’ve ever played.

You see, as I mentioned briefly before, in most Fire Emblem games, you’re playing odds: there’s typically at least a 5% chance you or your enemy could miss, and critical hits can either save your life or completely demolish an essential member of the party. And while there’s a certain thrill to seeing your character barely save themselves with a one-in-a-million crit, there’s an even bigger frustration to having to restart a battle because a poorly-timed crit kills off your healer. 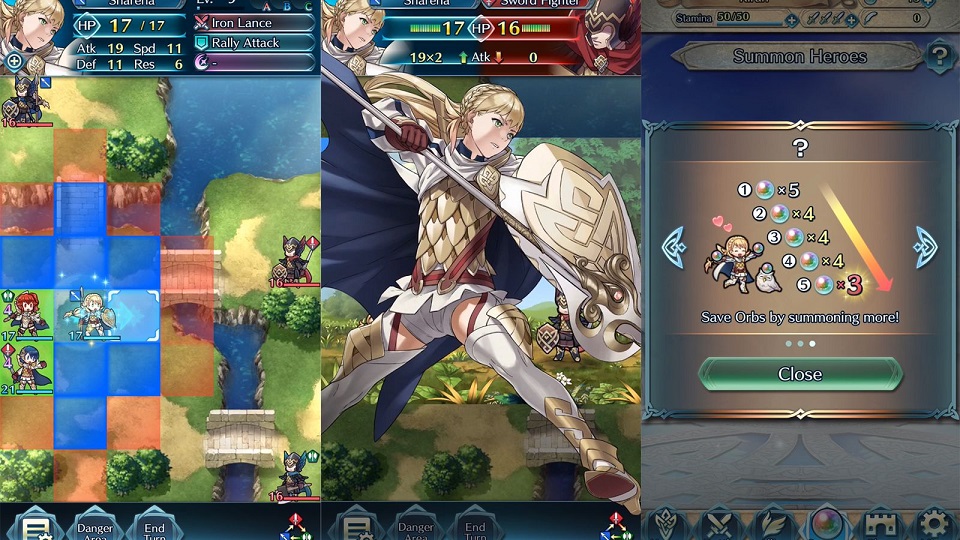 Fire Emblem Fates does away with all this in a rather clever way: get rid of critical hits and replace them with special attacks, which always operate on a cooldown. Every time your character attacks or is attacked, the cooldown goes down by one, and once it hits zero, it’ll trigger at the first chance it gets. This gets rid of the random elements in the base game and gives you something to plan around: how many times do I have to make my mage attack before she can unleash the attack she needs to kill off that dragon? Or should I try to soften up this bad guy with my archer, knowing it’ll make his special unlock faster? It’s a smart decision that I’d really like to see in future Fire Emblem games, because it means I’m always succeeding or failing based on my own planning… or if my characters are just over-leveled and outclassed.

I mean, this is still a mobile game, after all.

Whenever I talk about Fire Emblem, I always like to talk about how you can pair characters off and make them have babies. This game… kind of has that? Since its super non-canonical, and you’re dragging people from different universes together, there’s none of the fun little bits of dialogue you might come to expect or enjoy, but since every S-ranked relationship ends with the characters in a church that chimes with wedding bells, it’s pretty easy to imagine that they’re trying to invoke at least a similar feel as the main games.

Speaking of: the game does do a lot with a little when it comes to dialogue. Most of the characters who don't make up the main cast only really get a few lines, many of which you only hear if you bring up their pictures and you poke them a bit. It’s clear the writers are trying to distill each character as best they can (which often times reveals just how similar a lot of them are) and while it doesn’t really help if you don’t know the character already, if you are familiar with them, then it does a serviceable job reminding you why you may like or dislike them. And at least in one case – lookin’ at you Azama – I think they actually do a better job of capturing his attitude than they did in the original game.

Speaking of, I can’t speak to how deep this game’s story is compared to other, similar gatcha-style mobile games, but this one is fairly serviceable as far as Fire Emblem narratives go. There’s a good royal family, a bad royal family, a long-standing war, and some stuff happens. Where it really shines as far as I’m concerned, however, are the little bits that slip through in between the main story when the stronger characters get a chance to interact. Two kings discussing how to best rule their subjects and the value of a life, or a pacifist horrified to discover that every reality, not just his, is embroiled in conflict and bloodshed, or a son reunited with a father he long admired and dearly misses, take a surprisingly critical lens to the series long history, and makes the most of the “crossover” aspect of the whole game.

…dammit, this kind of turned into a review, didn’t it?

Well, look. As a fan of Fire Emblem, even if I haven’t played most of the games in the series, there’s still a lot to recommend about this. It’s not a game I’d sit down and play for an hour, but it is a game I might run when I have a couple minutes to spare… or I’m in the bathroom for an extended period of time.
Plus, they contrive really stupid reasons to have their character’s dress in bunny outfits.

If you Buy Cyperpunk 2077 on the Xbox One, You Will Get a Free Copy for the Series X

"Gamers should never be forced to purchase the same game twice or pay for upgrades."