by LizardRock on Oct 03, 2019 @ 07:33 AM (Staff Bios)
Comment(s)
In many ways, mankind should be thankful for what the Dome provided to us. Math, science, technology, medicine, it all advanced decades faster than ever possible on our own. But with the Dome came risks we weren't prepared for, including ourselves. This is the world of Encased.

Encased: A Sci-Fi Post-Apocalyptic RPG is, as the name implies, a top-down RPG akin to the original Fallout games, set in a retrofuturistic apocalypse. Taking place in a high-tech version of the 1970s, the player character is a member of a special organization dedicated to researching a bizarre landscape known as the Dome.

Currently released as an early access title, the game has the prologue, the first act, and several sidequests available. A large amount of the open world and the random encounters are also available. Various features are still under development, so expect some skills or items to be unavailable, as well as some bugs or forgotten translations.

Few games give as good of a first impression as this one has, especially for an early access title. The introductory story is engaging without being too verbose. And with a fair-lengthed prologue teaching you the basics of the game gradually, I was neither bored with tutorials nor overwhelmed with new options or ideas.

The initial impression was rather true to what most of the game will be, as well. The options available to you expand, but the game doesn't really change vibe very much.

Encased has an impressive number of strengths for an early access game. The strongest of these are in the lore/writing and in the actual game mechanics themselves. Both start strong and stay strong throughout the entire experience.

Mechanically speaking, the game is a wonderfully refined homage to classic RPGs like Fallout and Baulder's Gate. This can be seen in everything from the turn-based combat to the skill-based unlockable options. With multiple background stories available and an expansive leveling up system, it offers a lot more than the games it's inspired by did. 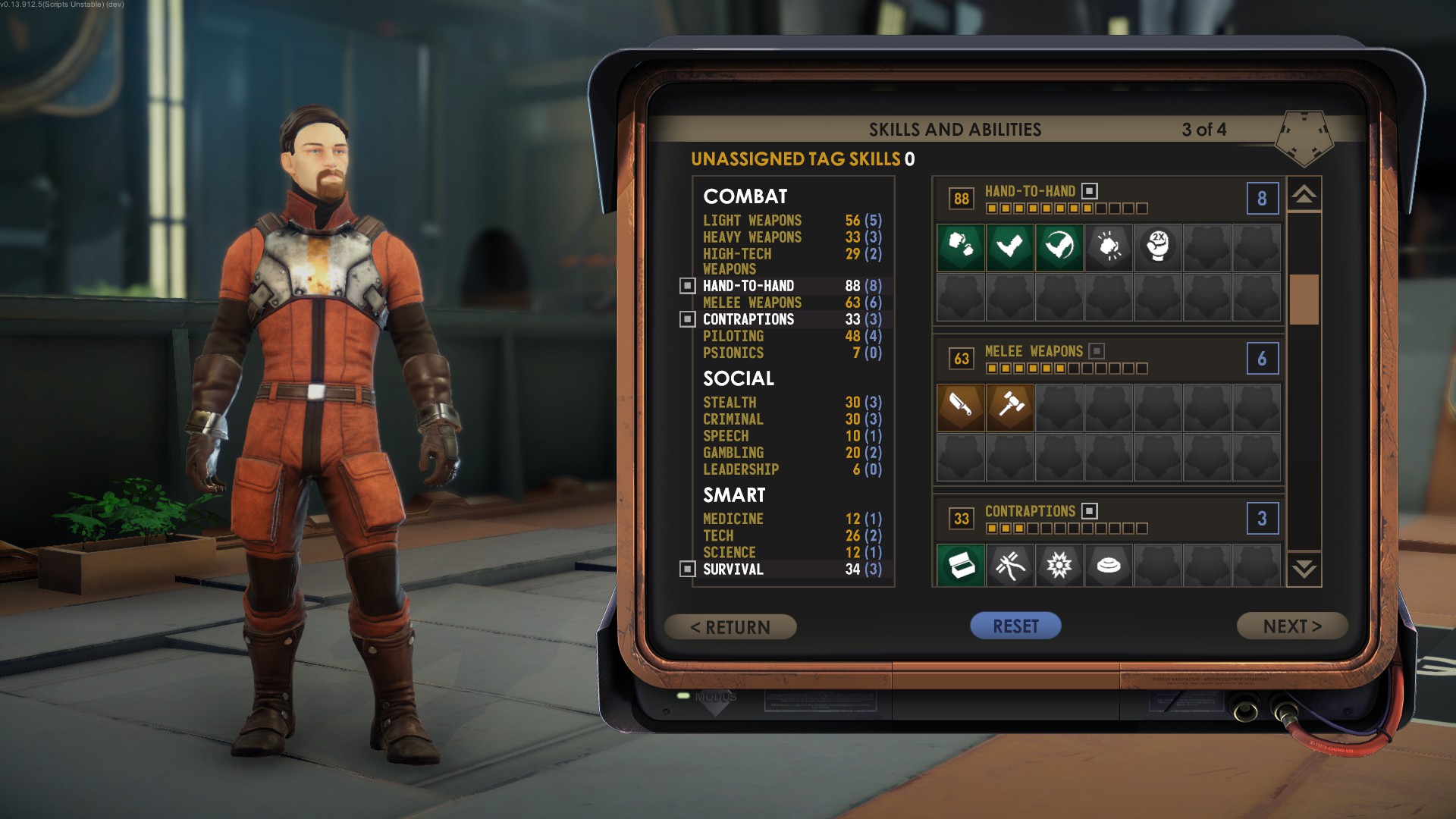 It's not the same game for every character either. Like classic Fallout, the skills, abilities, permissions, and dialogue choices you have available to you can vary from how you spec your character and the background you choose. I was a soft and smart scientist in the White Wing section of the organization. This granted me access to special rooms and technology that other backgrounds might have not. Alternatively, being part of the fugitive class of Orange Wing offers a very different experience, at least at the start. I appreciated the diversity, it made me want to try multiple runs of the game as different characters.

One aspect I personally appreciated was that while it was inspired by classic RPGs, it didn't fall to the shortcomings of those same games, primarily in regards to balancing. Though to be fair, there's something to be said about the guidance provided. But I'll touch on that later. 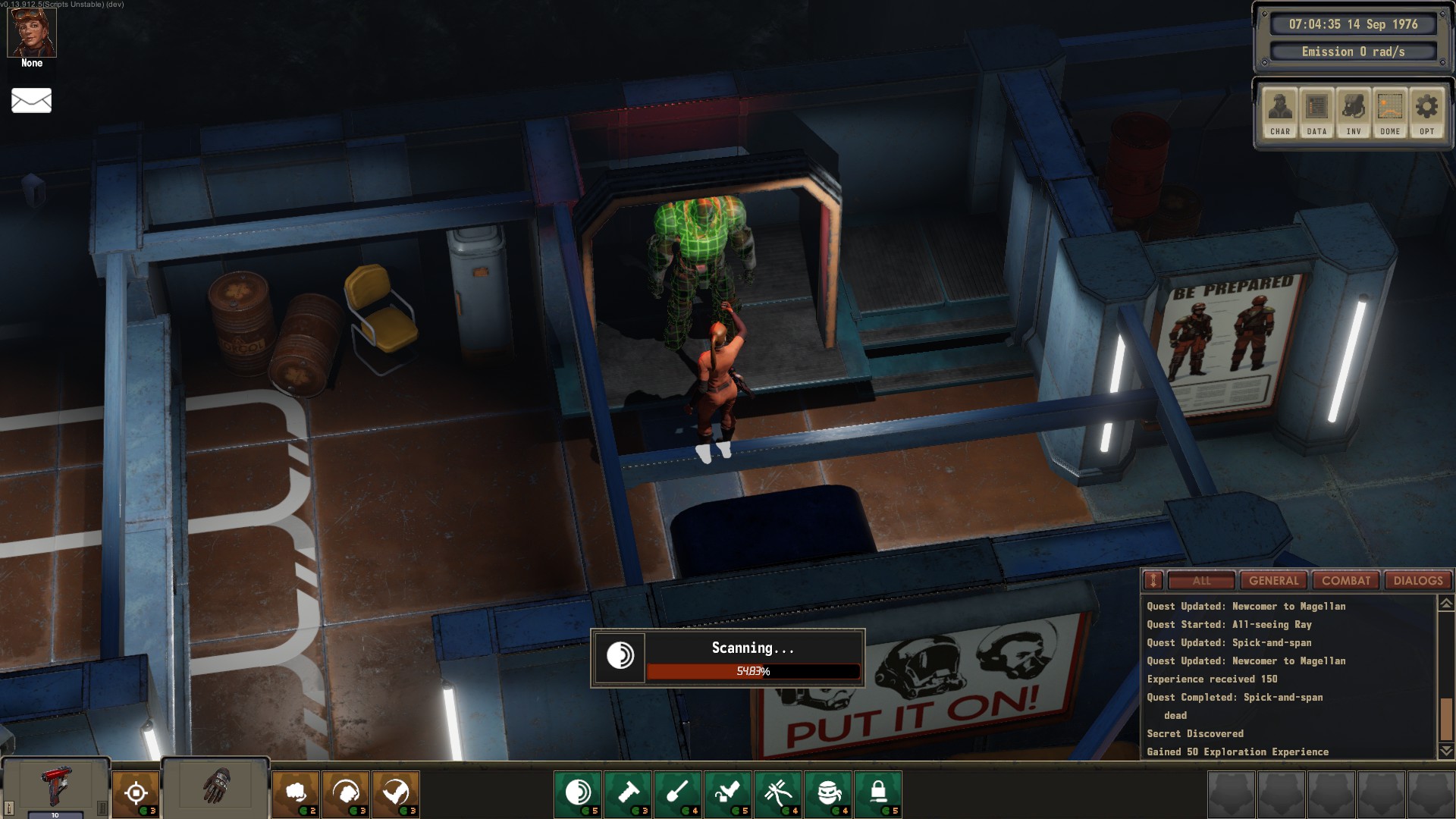 The other powerhouse of quality from Encased is the writing. Encased is the Roadside Picnic game I always wanted. The game shares similar concepts with the classic Russian novel (i.e. an isolated landscape of inexplainable weirdness, where rare relics can be found). But instead of imitating, it takes similar ideas and runs with them, creating an equally interesting narrative.

But Sci-fi RPGs have been done to hell and back, as have post-apocalyptic games. Instead of feeling stale, the game manages to draw inspiration from classic Sci-fi stories while still being fairly original in its own right.

One final special mention I wanted to give praise to was the inclusivity of the character creation. The player can choose male, female, or "other" as their gender options while choosing masculine or feminine builds. This was a small touch that means a lot to many LGBT gamers. This isn't something you'd see in a game from the 90s. 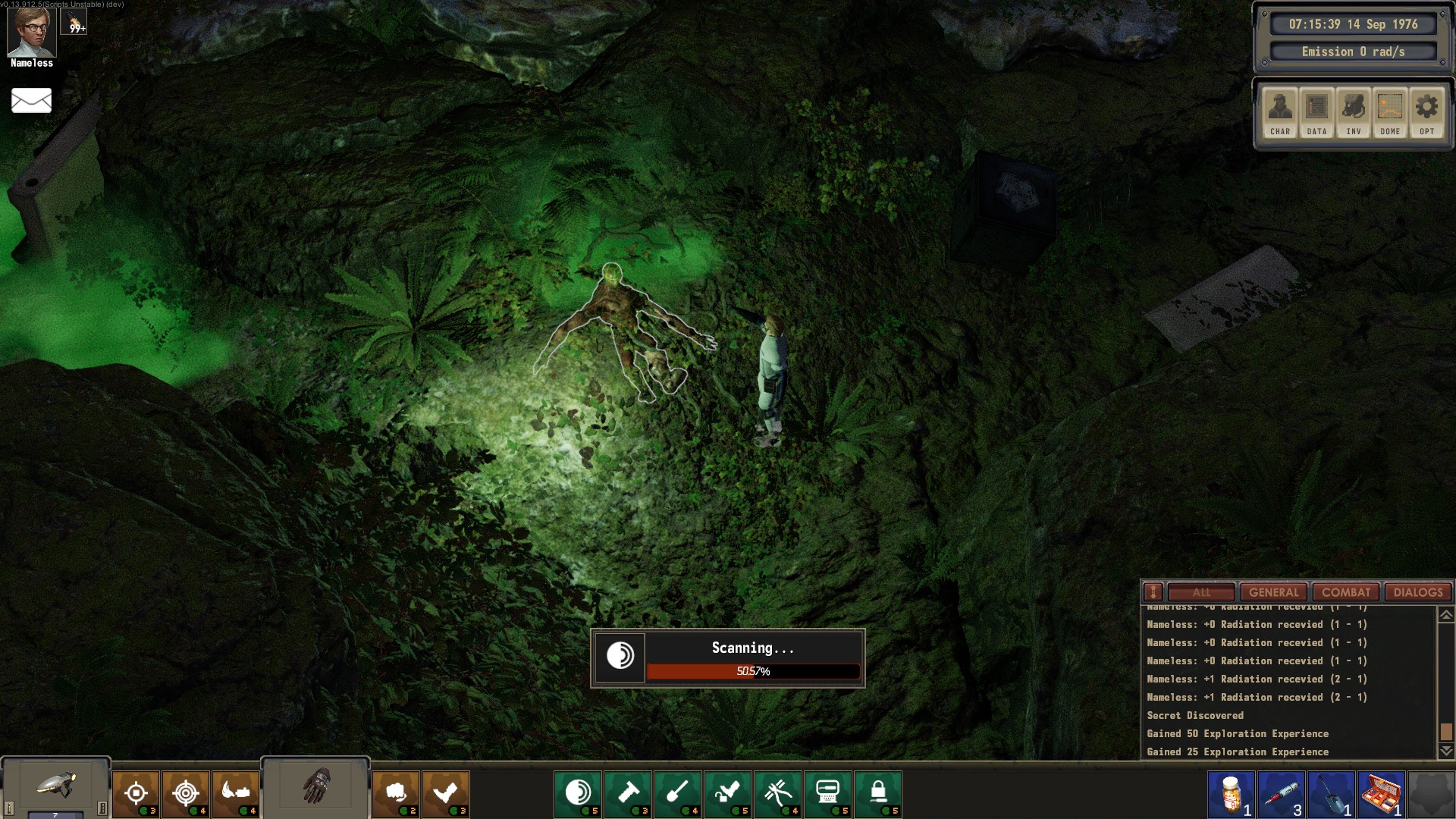 Even completed games have problems, so it's inevitable that an early access title would as well. The impressive part is how few problems Encased actually has. And what trouble it does has are fairly understandable.

The biggest issue is with the freedom the player is given. There's a common joke that video games hold the player's hand too much nowadays. "Skyrim points you to your goal while Morrowind only has a vague journal page" and statements like that. And there's some truth to that. Since Encased is inspired by games of that older generation, it's no surprise that they would have a similar lack of guidance. 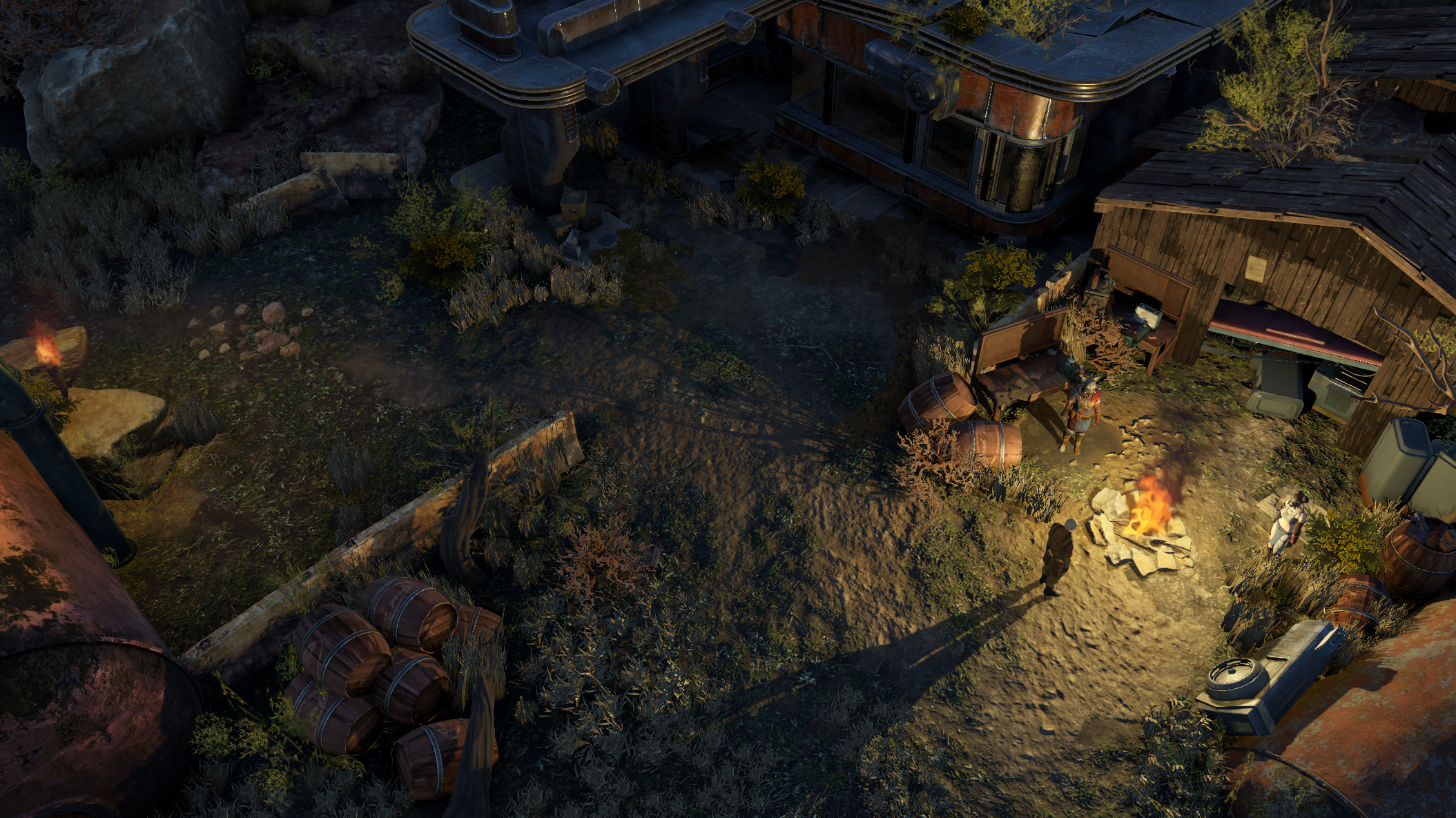 It's not that the game doesn't tell you what you should/need to do, but sometimes the specifics can be overlooked by the more absent-minded player. A perfect example of this was with the combat training segment in the Prologue. The game tells you to go to the training grounds and activate the simulation via the computer. It told me where the room is. But once I got there, I ended up wandering the wrong way a few times trying to find out what computer they were actually talking about.

Another was a small sidequest to fix a camera. I knew the camera was in the ventilation system. But I didn't know where to find that or how. I never completed the quest, because I didn't want to wander around for some unknowable amount of time looking for something that I didn't know what looked like.

The game also has a bit of the retro level of difficulty as well. By no means was my character specifically designed for optimal play, and the lack of combat focus showed in much of my combat. But is that a fault of the game, or of me for choosing a weak little scientist and wondering why a buff raider can break my legs so easily? While I personally wouldn't call this a flaw, I could imagine this being a spot of annoyance with a more casual player.

The nice thing about early access reviews is that it gives the opportunity to help provide input that could change the final product. Here are a few things I'd like to see added to the game before it's official launch.

1) More visual cutscenes
Many of the cutscenes in the game are still images with detailed text explaining the situation. This is great for a nostalgic sense, sure. But I often found myself fantasizing about how much nicer it would be if I could actually see the scene in front of me. While this wouldn't have to be fully animated and voice-acted cutscenes, adding more still images pertaining to the scene at hand would do wonders for improving the game's immersion. 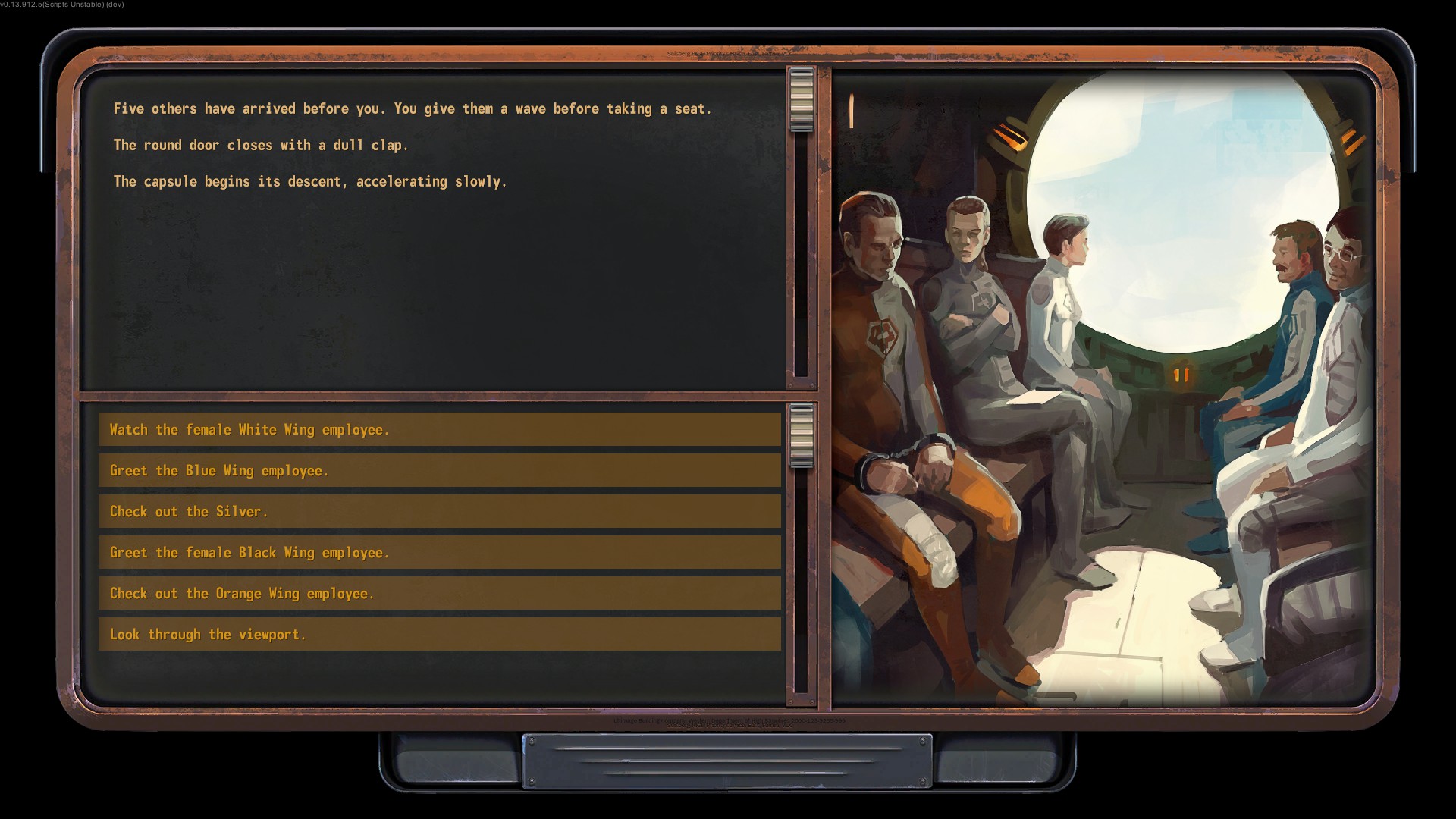 2) Difficulty Modes
As mentioned before, the story and lore of Encased is fantastic and engaging. But the game can be a bit difficult at times. If there was an option for easy modes, a casual player like myself would experience the world they've built without having to struggle.

On the other side, hard modes or "Survival" modes would appeal to the hardcore players. Special modes that don't allow saving outside of beds and increased survival difficulty would appease these folks while offering an alternative challenge to people who complete the game in the normal mode.

3) Zoom Out
That's it. I want to zoom out further.

Encased: A Sci-Fi Post-Apocalyptic RPG is one of the more promising early access games I've ever played. It ticks all of the right boxes to me and I can't wait to see the rest of the game expand as development continues. Content is a little small at the moment, but this is both known and being worked on.

At an early access price of $30, I recommend this game to anyone that likes classic RPGs or sci-fi adventures.

Encased: A Sci-Fi Post-Apocalyptic RPG is developed by Dark Crystal Games and published by Black Tower Entertainment. It is currently available in early access on Steam PC for $29.99. More information can be found on the game's official website.

Disclaimer: This is an early access review. As such, the format is a little different and the overall opinion is influenced by its current state. It may not reflect updated versions of the game. When the game leaves early access, another review will be written and linked to. Also, a review copy of the game was provided for the purpose of this review.