It was a time.

This go around it’s DOTA: Dragon’s Blood, which is based off the hit MOBA from Valve, DOTA 2. And while I’ve historically reviewed every Netflix anime based off a video game, this will be the first time I’ve watched something with absolutely no other context: I’ve played Castlevania games, I’ve played and loved Dragon’s Dogma, but I’ve never once, in my entire life, played DOTA. So I went into this adventure completely blind, free of any preconceptions, assumptions, or indeed, expectations of this title.

I left… kind of ambivalent.

Let’s do a quick recap of the series, tho, before I get into my opinions and thoughts. Spoiler warning ahead, obviously. 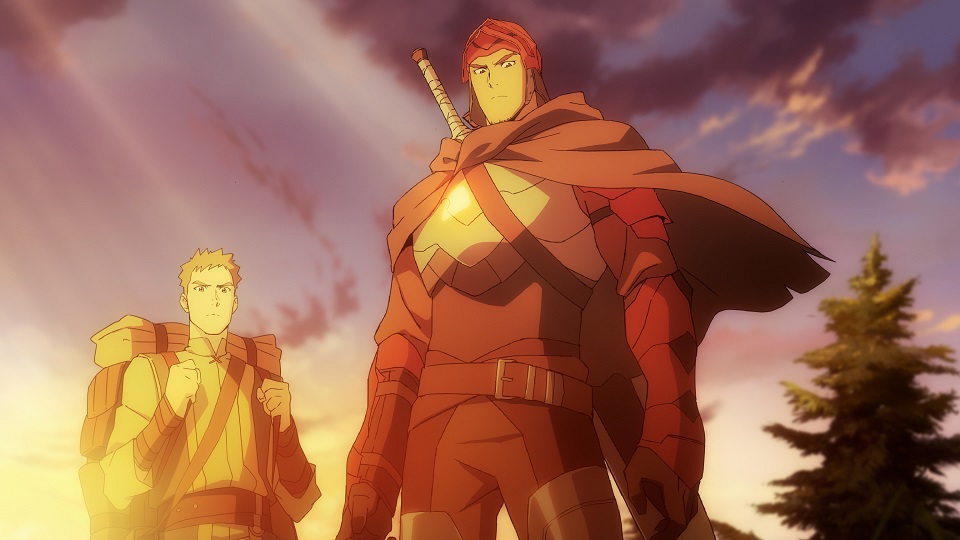 So the plot begins with Davon, a dragon knight, killing a dragon in a pretty good fight scene (the folks behind this are Studio Mir, the same people who did Avatar: The Legend of Korra) and getting the praise and love of the people around him. In exploring its underground den, they discover something called an “Elderwyrmn”, and while the captain of the guard insist they kill it too, Davon’s like “no those things are too strong just leave it alone and hope it stays asleep”. Everyone goes home, Davon gets drunk and laid, while the captain of the guard is so salty that some ancient Demon known as Terrorblade shows up and tempts him into alloiwng him to possess his body in exchange for slaying the Elderwyrmn. He agrees without much convincing.

Meanwhile, a princess of the moon, Minerva, shows up and has an exchange with Davon. The seeds of their inevitable romance are planted when he saves an Elvish associate from an angry mob, because fantasy racism is a cool trope that definitely isn’t overused. From this Elvish associate, she learns a location where she could find some stolen flowers that her goddess really wants, and she heads out. 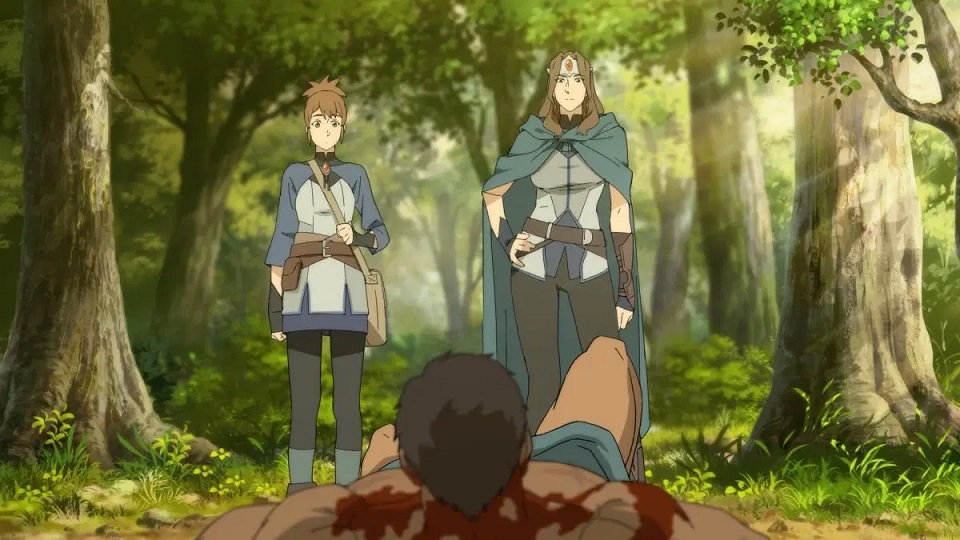 Together they head to town and go their separate ways. Davon gets into a fight with a bandit captain after spitting up his brother’s ring, and Minerva and her associate are nearly captured and raped because sex trafficking and rape just has to be a thing in every goddamn dark and edgy fantasy story nowadays doesn't it. Like geez I’m so sick of it, it’s not like it even accomplishes anything no story is told no characters are developed it’s just like “hey we gotta make sure there’s some rape in this otherwise the frothing masses of entitled two-finger jerkoffs will complain online that we don’t objectify our women characters enough”. It’s gross and pointless and I hate it so goddamn much if you need to have rape and titties at least do something with them holy crap and a bottle of blessed piss.

Anyway they’re fine. They leave, Davon tries to fight the bandits, loses, turns into a dragon, is saved by Mineva. They all agree to go to a sage who they think will help with their mutual situation. Also there’s an Elf girl who stole the flowers Mineva is after, but her plot kind of ends after she gets the flowers and brings them to the same sage in the hope that he’ll resurrect some kind of dead god. That whole part of the story was a bit confusing.

Anyway on the way they have a detour with a glowing rock that creates zombies that kind of brainwashes Minerva for some reason that’s never really explained. And then they have another detour with a member of Davon’s Dragon Knight order who really hates the Dragon living in Davon’s body and the two of them fight a bit and… yeah. That happens. Then they reach the Envoker. He agrees to try and help cure Davon and to return the flowers to the Temple of the Moon, but only if the Moon priest people stop slaughtering the Elves, which they started doing not long after the flowers were stolen after the Goddess of the Moon who I can’t be bothered to look up the name of got provoked by the Invoker in an earlier dream. Also the Invoker and the Goddess used to be lovers. They have a dead kid. It’s important.

So they go on another journey, enjoy another detour with dragons because no other fantasy beasts exist in this world it seems, reach the moon people and hand over the flowers. But it was a trap, because when they open the box the flowers were in, they’re destroyed and the Goddess of the Moon’s powers are disabled. The elves start slaughtering the moon people, Davon gets captured by the Dragon Knights, and we learn that Terrorblade or whatever made a deal with the Invoker to kill the Goddess in exchange for the souls of the 8 elder Wyrmns who control the pillars of all creation. Once he gets those souls, he can remake reality in his own twisted image and everything would be a real bummer. Then the series ends. 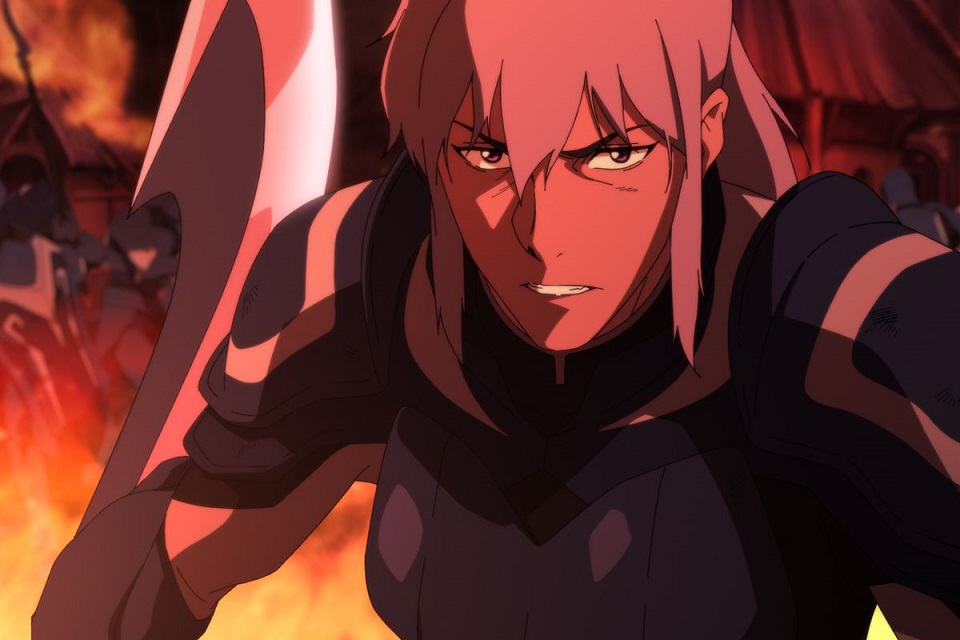 If this sounded less enthused than my other review recaps, it’s because it was. This… I wouldn’t call it “boring”, because it was an enjoyable enough watch, but it certainly didn’t inspire much excitement or passion. It didn’t have the glaring flaws that Dragon’s Dogma had, or the ridiculously stupid hole-filled plot that makes Castlevania a fun time. It just sort of comes and goes. And the world that it paints is so generic that it either didn’t pull enough flavor from its source material, or the source material is so generic that it probably didn’t need a anime in the first place. It’s a story of a knight with a sword, a princess with a bow (and her mute sidekick, who’s a delight), and a rogue with a dagger working together to fight the bad guys. It was a Dungeons and Dragons campaign with a dungeon master that was really good at tying together the character’s backstories, but really bad at building a world worth visiting. Thrilling for the players, maybe, or the people who know the players, but… not for people like me.

And it hasn’t really made me curious about the DOTA games. I only even visited the Wiki once, to see which characters were actually playable and which were new to the story. The answer was a small handful, and worse, they picked perhaps the most boring and generic characters they could have written a story about. Heck, just looking at names and portraits, I think an anime about Snapfire or Weaver or Timbersaw would have at least been more interesting. I don’t know anything about them, but a story about a gun-obsessed elf on a toad, a giant spider, and a goblin in a homemade mecha is a lot more unique than what I described above. And probably a story I’d like to hear.

I can’t help but compare it to the MOBA I do play, League of Legends, and make me wonder how this anime would have treated that world, which I do follow fairly closely and thus do know rather well. While the elevator pitch for each region is rather generic (magic-hating kingdom of knights, power hungry expansionist empire, ice vikings, “just straight-up fantasy asia”), each location is fleshed out with details that both make each location unique from each other, as well as their contemporaries in the world of fantasy fiction. Noxus, for example, is a nation of chain-breakers, and has a baffling complex social structure that allow the strong of conviction to elevate themselves as well as the strong of arm. Demacia produces rare magic-absorbing rocks, and has warred with the forces of death itself in the name of no man being left behind. Shirma is trapped between being a revived ancient Egyptian-style empire, and a “modern” scavenger-based wasteland of travelers and ruin runners. How much of that could be captured in an animation like DOTA: Dragon’s Blood? Or would any show set in this universe by the folks at Netflix just pick the most marketable, attractive, and boring characters and drop them in a fantasy world that only alludes to the world of the games, rather than is truly set in it?

I guess it doesn’t matter how deep and original DOTA 2’s world actually is. Because the chunk of it I saw was a fun but unmemorable time. And I don’t really plan to visit it again.