Its no For Honor, But damn is it fun.

by JesseCecchetto on Mar 01, 2017 @ 01:31 PM (Staff Bios)
Comment(s)
Hey, Everybody.  Welcome to the first installment of my let's play series.  For my first session, I thought some Chivalry would be a good start to what I hope will be a long line of entertaining videos.  While I don't consider myself to be extremely talented at Chivalry Medieval Warfare, I think the game physics and combat mechanics make for some pretty hilarious gameplay.  It's definitely no For Honor in terms of strategy, but the combat still requires a good understanding of timing, distance and combining attacks.

Chivalry Medieval Warfare came out in 2012, and since then it has maintained a fairly loyal community on PC and Console.  I would like to think of it as a medieval hack and slash that doesn't take itself too seriously.  The game is riddled with trolls and arguably made with the intention of people having fun and messing around.  Of course, if you play on PC like me, you get to enjoy the full array of interesting player created mods, including maps, game modes, armor, and weapons.  There has without a doubt been dozens of Star Wars mods, with many of them failing, but I think I found a pretty good server as you will find out towards the end of the video.

If you were disappointed with Battlefront's lack of lightsaber combat, then maybe give Chivalry a chance, just don't have too high of an expectation.  While it isn't very realistic, it is a damn fun time, and it also looks crazy badass.  Other than playing dress up Star Wars in Chivalry, free for all tends to be my favorite game mode, as well as the most chaotic.  Why I prefer free for all over team deathmatch? Well, it's fairly simple.  You see, Chivalry Medieval Warfare has friendly fire rooted into the games core mechanics.  While you may be trying to do damage to the other team, you can also do just as much damage to your own teammates.  You can probably notice a "kick this player" tab at the left side of my screen throughout the video, and this is because some players tend to hurt their own team just as much as the other.  Think about dozens of knights with swords as big as their own body, swinging them horizontally in a group of enemies and friendlies.  Well, the result is an absolute cluster of blood and dismembered limbs.  For whatever reason, most people can't understand the concept of stabbing in a group fight instead of swinging until the sun shines. 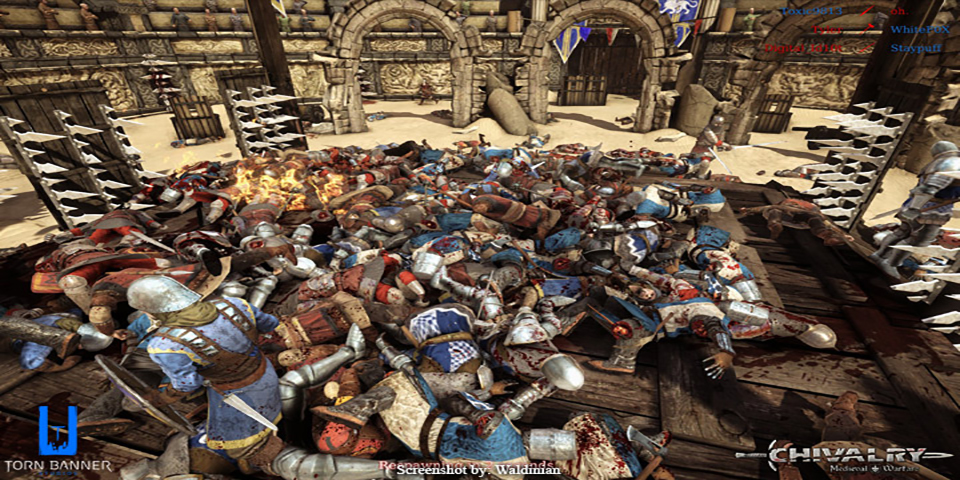 Though some people might find the friendly fire mechanic annoying, it's what makes Chivalry Medieval Warfare unique.  While it provides some hilarious moments from time to time, it also add's an extra level of strategy.  Only seasoned players can control their swings in fights with their squad mates and not end up hitting their friends at least once.  If you're looking for an extremely intense all out castle siege, play some 32 v 32 team objective.  You can charge castles with your brothers in arms, break through the gate and kill the King.  While it's fun getting into huge, all-out brawls with your team, it's also extremely satisfying protecting the castle walls via catapults, ballistae and hot oil.

As far as the audio goes in Chivalry Medieval Warfare, your first thought will probably be that the voice acting cast must have had an absolute blast.  FOR AGATHA! Between the amazing battle screams, and the utter shrieking sounds of pain, the most prominent sounds during gameplay is from the players.  Skilled players will taunt you with laughs and witty comments, while amateurs will most likely scream at the top of their lungs will charging blindly into battle.  I tend to like battle screams more than anything.  Nothing feels more satisfying than screaming at the top of your lungs just before cutting a man's head clean off, all the while he was staring death straight in the face. 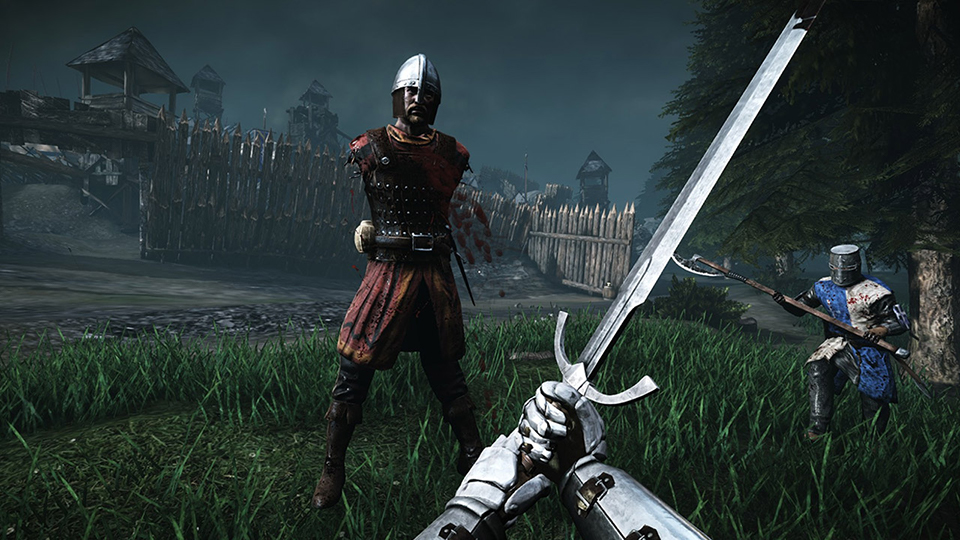 Chivalry Medieval Warfare consists of four different classes.  Archer, Man at Arms, Vanguard, and Knight.  Archers, well, they're pretty self-explanatory, and they're also the most hated class in the game.  If I'm in a brawl with dozens of enemies, I will literally search for and kill any archer with hesitation.  KILL THOSE ARCHERS!  Man at arms are the skinny warriors with the ability to dodge and bust out incredibly fast combos with one handed weapons such as ax's and shortswords.  They have the second smallest health pool in the game, but they excel at getting up close and personal while dishing out deadly combinations.  Vanguards are probably the most commonly picked class in the game because they have the highest damage, and the ability to make running swings for massive damage.  While they don't have as much health as Knight's, paired with the Zweihander, they can literally one shot Archers and Man at Arms.  They also have the largest swords in the game, so naturally, bigger tends to be better and more fun.  Knight's are basically the tanks of the game.  They have an incredibly high health pool, but they don't do as much damage as Vanguards.  Knight's are arguably the safest pick for new players since they can afford to make more mistakes.  Paired with a kite shield, they can be incredibly hard to get at.  Archery can be a really fun experience, but it's also incredibly challenging since you have to lead your shots, and the movement mechanics in Chivalry give players the ability to make very unorthodox and un-natural moves.  It's best done in team objective from the safety of a castle wall, just watch out for other enemy archers.

You'll see that I use the Vanguard class for the majority of the video, at least before I turned into a Jedi.  Why Vanguard you say? Well with the Vanguard, I get to use a sword that is literally taller than the body of my character.  You know what that means? It means I can play free for all, and use the patented "Spin to Win" method.  While it may be cheap, its also incredibly satisfying and hilarious.  There's nothing better than charging at two people having a good duel, and chopping them both down in one swing of my sword.  It's basically like the equivalent of role playing "The Mountain" from Game of Thrones.  Luckily there aren't any horses in Chivalry.

Path of Exile is getting out of the way.

CD Projekt Red Staff Didn't Know About Delays Before We Did

Turns out, this is a bit of a mess.

Cyberpunk 2077 Delayed, Yet Again, to December

Those of you looking forward to playing it in November just got Cyberpunked.

Taking another stab at the stab-heavy series.