I enjoyed it, but it still sucked.

by pocru on Nov 18, 2018 @ 12:46 AM (Staff Bios)
Comment(s)
Look. I know there’s a lot going on in the gaming and nerd world right now. I know that I’m super-late on this subject, which is a matter of course for me. I know that there are way better things I could fill this space with this week. I know, I know, I know.

But I want to talk about Castlevania season 2. So that’s what we’re going to do, kiddos. 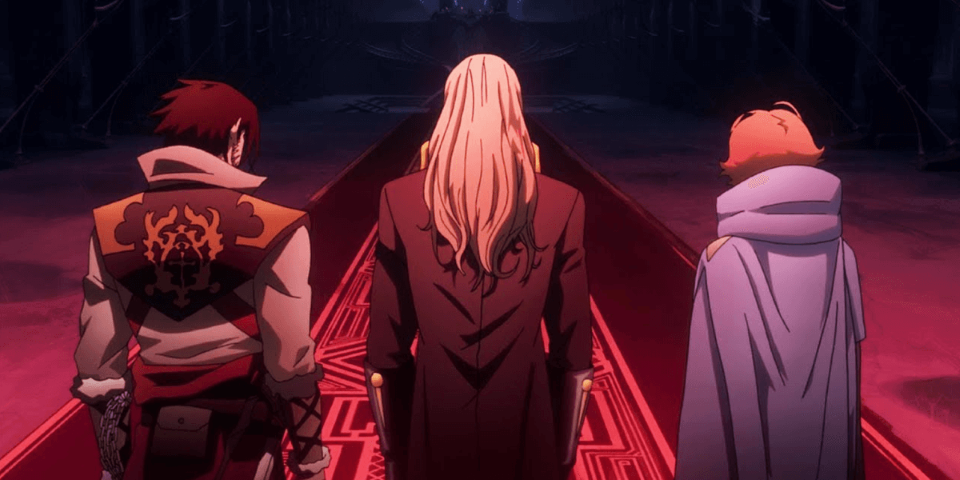 Now one of my favorite articles I’ve ever wrote for this website was my bitterly sarcastic synopsis of the first season of Castlevania, pointing out the enormous plot flaws and writing problems as we follow Simon Belmont’s drunken stumbling through the demon-blighted lands of old Europe. And I sort of intended to do a return to form for season 2, but I’m delighted to report that it’s not really necessary: not only is it far too long to comfortably condense within this article, given there were far more episodes this season than the last, but also because the season was a marked improvement in quality. There were less plot holes. The dialogue was better. There was good character chemistry. There’s less to outwardly mock.

Less, however, does not mean there’s nothing. Because while I could unironically enjoy this season of the Castlevania show, I still had my fair share of gripes. Which I fully intend to share with you, and the rest of the world. So without further adieu:

I’m not projecting when I say the creators of the show were trying to make things morally gray: they admitted it themselves in an interview with Kotaku:

With that said, it was important to establish the nuance of the world and the characters so that it wasn’t just a story of good versus evil, which the show’s never been about. It’s always been existing in a world of shaky grey…

… I think in a lot of ways that Castlevania is a lesson. That idea that there’s no good or evil but just points of view and shades of grey. Villains are the heroes of their stories.

And you can see the fruit of their labor in the show itself. They spend a long-ass time (at least three episodes) primarily from Dracula’s point of view, where we see his generals and war-parties, learn more about his tragic backstory (trademarked), and the melancholy that has consumed him since his human wife died. Not only were these bad episodes because nothing happened (it was basically a combined 70+ minutes of brooding), but they absolutely fail in their goal to make Dracula more human, or create a “world of gray”. All they do instead is make the world flat and boring.

Lemmie explain. Dracula’s goal is the extermination of all humans, which will also inevitably lead to the extermination of all vampires when they lose their food source. That is not a noble or just goal. There’s pretty much no way to make “genocide” a morally ambiguous… thing. It’s unambiguously evil. It’s like trying to make Hitler a morally ambiguous ‘shade of gray’ person. But the show sort of tries to make us see the world the way Dracula does by presenting us with cruel, vicious, and “evil” humans, the kind of people that inspired him to go on his genocidal rampage.

But here’s the thing: the show goes so far out of its way to present us with dicks and jerks that it sort of forgets to ever show us any “good” people. Most people, unless they’re actively being evil, exist only to scream and flail about as they get gruesomely slaughtered by the creatures of the night. If a human has a speaking role in this damn show, they’re either a main character or they’re some corrupt priests or something. This makes the world, frankly, boring: it’s one thing to have a world of gray because of contrasts of light and dark, but when you make the world gray because nothing has color: that’s just boring. You’re making a boring world, show. And worse, they did it on purpose in a failed and hopeless attempt to make a character who’s trying to commit a goddamn genocide not completely evil. But you know what, show, it’s okay to have evil characters. It’s fine to just root against someone, especially if that someone is trying to commit genocide.

But anyway. There are other problems. Namely…

I don’t mean that literally, of course. But over the eight episodes, here’s an exact list of things that happen:Now, if you list something so matter-of-factly, of course it’s going to come off as rather boring and dry. But while the show adds the necessary flourish to keep things entertaining, it really feels underwhelming when you look back on it. And I think the reason why is actually fairly obvious: all the time the show could have spent building up the stakes and organically ramping up the tension, it instead spends on backstory and trying to make that morally gray world I told you about earlier.

So we go from “chilling in the Belmont basement” to “Killing Dracula” in about two episodes. It feels a bit anti-climactic, because they only really agreed to kill Dracula at the start of the season, and did exactly one thing – go to the Belmont estate – to prepare for it. It feels like Dracula, being the big bad and final boss of the series, should have been harder to reach and kill, but the heroes make it look relatively painless because all the time they should have spent preparing, and questing, and trudging through a dangerous and hostile castle – was spent on that failed Dracula backstory. So instead they just show up at the front door, kill a few guys, then find him brooding in his study.

I’ll grant you, the episode-long throw-down between Dracula and the heroes is a thing of legend. Loved the hell out of it. But it felt a wee bit unearned. 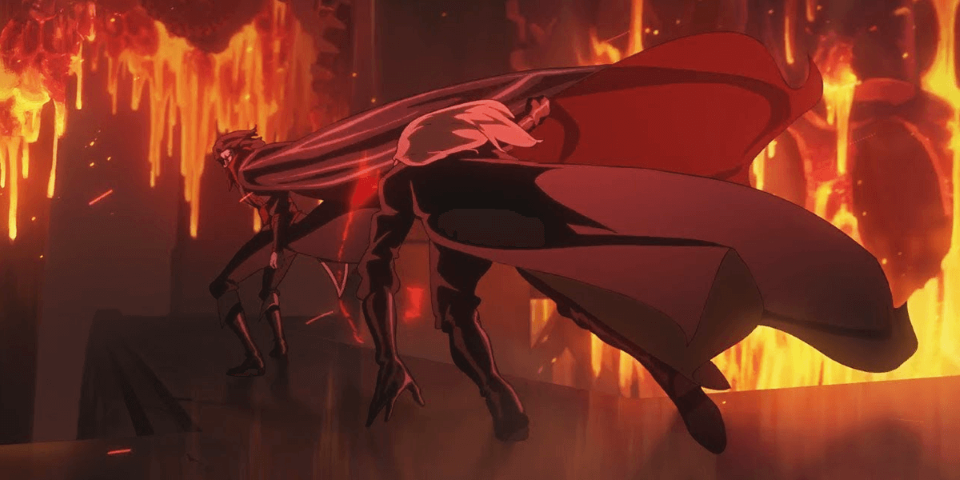 I don’t mean that in the bad way strictly. I’m all for having heroes and protagonists who have enormous flaws, and Trevor being sort of an asshole is a perfect example of that. It adds character, and tension, and people call him out on it so it can be used the flavor character dynamics.

What I mean is that there’s one very specific point of dickishness in the story that sort of drove me up the wall: the ending. So spoiler alert: after beating Dracula, the three heroes are standing around like idiots in the lobby, talking about what to do next. Alicard is all “well my plan was to just sort of drop dead but since someone’s gotta guard this castle to make sure my pop’s knowledge doesn’t fall into the wrong hands, I’ll just chill here forever”.

And Trevor says “no”.

And that’s great. Because the two have been at each other’s throats this whole time, more or less, and Trevor has done a very poor job extending the olive branch up until this point. So that “No” is abrupt and kind of sweet, because you sort of expect him to be all “you’re worth more than the legacy of your father, you deserve to live your own life beyond his shadow, so we’ll find a way to seal this castle together so you can be free to see the world”. You know, the kind of decent, lovely sentiment you’d hope for in a hero.

But that’s not what happens. Instead, Trevor says “No, you get to spend your eternity guarding your dad’s castle and my old house, because there’s lots of crap in there too. Congratulations.”

And like, crap man, that is one dick move. He’s abdicating his responsibility to his family on his traumatized immortal friend (who already said he found the Belmount estate distasteful and gross because it’s basically a museum dedicated to the extermination of his kind) so he can go gallivanting through the countryside with his new sexy-voiced magician girlfriend. And for some reason, the show frames this as a good thing? Because Alicard starts saying “thank you” and tearing up and stuff? Excuse me? Is this actually a good thing, here? It’s not even a nice house, it’s a burnt-down ruin and a slightly flooded library. You go and enjoy that mess, Alicard, I’m gonna go get wasted and whip some priests because oh yeah all the priests in this universe are evil despite the fact they’re pretty much always right.

Like, seriously. They accuse people of witchcraft and the story frames it as some crime, but 100% of the time the accused person is actually a witch and/or consorting with the devil. They’re doing their jobs in this universe way better than they ever did it in real life. “Corrupt” my ass.

Star Wars: Tales from the Galaxy's Edge is an Upcoming VR Experience

Set in the outskirts of Batuu's Black Spire Outpost

Apparengly 80% of Gamers Eat While They Play

A Sequel to the Sonic the Hedgehog Movie Has Been Confirmed

Flip them, shake them, watch them splash around.

How Do You Remaster a Masterpiece?