The game is worth talking about but geez.

by pocru on Apr 25, 2021 @ 03:30 AM (Staff Bios)
Comment(s)
Another day, another review. If it feels like I’ve been doing a lot of these — if I’ve been bothering to write anything at all — it’s because the ol’ noggin’ is starting to dry up. I’m just straight-up running out of things to say. Maybe it’s a symptom of my old age, or my withering imagination, or my increasingly busy/depressing life, but when I try to concoct an actual opinion piece to write up each week, I generally come up black. So it’s reviews, now. All reviews, all the time. Which is just as well, since at least reviews are good for something, unlike my silly old opinions.

In any case, this week, we’ll be looking at another game that came out fairly recently: Trails of Fire. Otherwise known as another roguelike deck builder trying to distinguish itself in an increasingly crowded field and take down Slay the Spire as the current king of the genre. 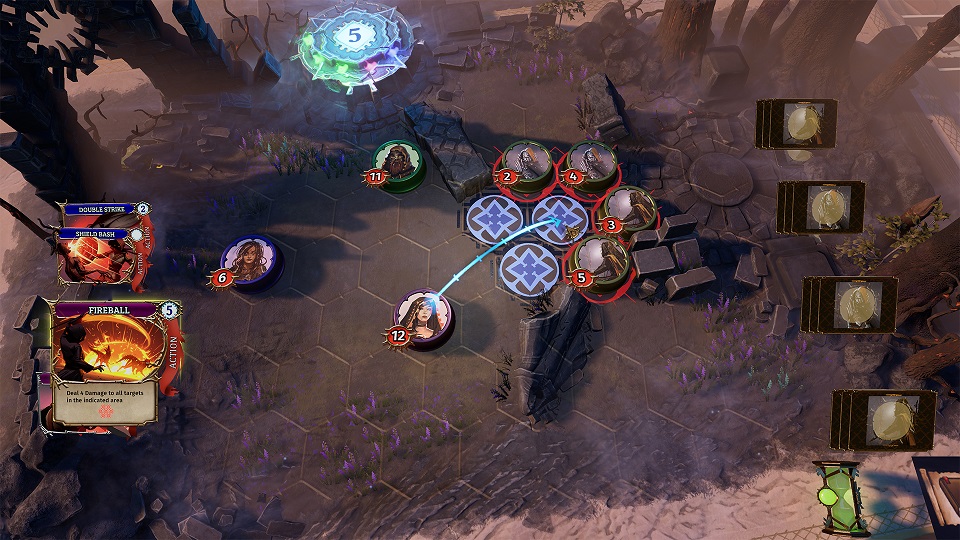 Trials of Fire is set in a post-apocalyptic fantasy world that does the new thing where there are some new proper nouns, some familiar ones, and a few tweaks and remixes to familiar formulas along the way, but is largely recognizable as a generic fantasy world you’ve visited a million times before. You’ve got your humans, your elves, your Dwarves, and they more or less function exactly like you know them. But we’ve also got “charred”, which are basically people made of ash and ember, we’ve got the Ratlings, which are Skaven if they had an actual civilization, and the Hybrids, which are Tieflings with some of the edges filed off. You all live in the Glasslands, the burnt-out husk of a once vibrant and living world, trying to survive whatever horrors the game throws at you during an average run, which lasts anywhere from one hour to three, depending on the difficulty and the length of your mission.

The world has quite a bit of lore to it, actually, and helpfully, all the fancy words and proper nouns you might not recognize are highlighted in blue, allowing you to hover over them with your mouse to get a better understanding of what they are and what their deal is. This is how you come to understand a lot of the game’s story, although to be perfectly honest the game is enjoyable enough without knowing what a Voider is, why the Ratlings are the most populous race on the now-scarred planet, or the names of the elemental gods. In fact, after half an hour of playing, I kind of stopped reading all the flavor text entirely — I just wanted to get back to fighting stuff. Which is both testament to how fun the game is, while also a not-so-subtle indictment on how mediocre the writing and world is. It’s functional, don’t get me wrong, but… it’s not the kind of world you fall in love with, like Griftlands. It’s just set pieces, albeit more elaborate than your average deck building roguelike.

Anyway. The game starts with you picking three heroes — or, when you just start out, picking the three you start with — and picking one of the campaigns to do, which is basically just what your objectives will be. Then, after you’ve done what little you can to kit out each character, you actually start to play. You start on a big overworld map, where you and your characters can move around a bunch. Generally, there will be an arrow pointing you towards your next objective (assuming it’s not something ambiguous, like searching any old Elvish ruin) and you head that direction, doing whatever side missions and encounters you feel like along the way. Sometimes, these missions will just amount to you making a decision and playing the odds — say, taking a 50% gamble that you’ll get money, at the risk of losing some HP, or choosing between getting vital supplies (like food) or getting new followers and items, which make you more powerful. In this part of the game, things are actually rather… annoying? It’s easy to start to lose pretty badly because the RNG gods aren’t smiling down on you. Worse still, there’s not one, but two time limits working against you. 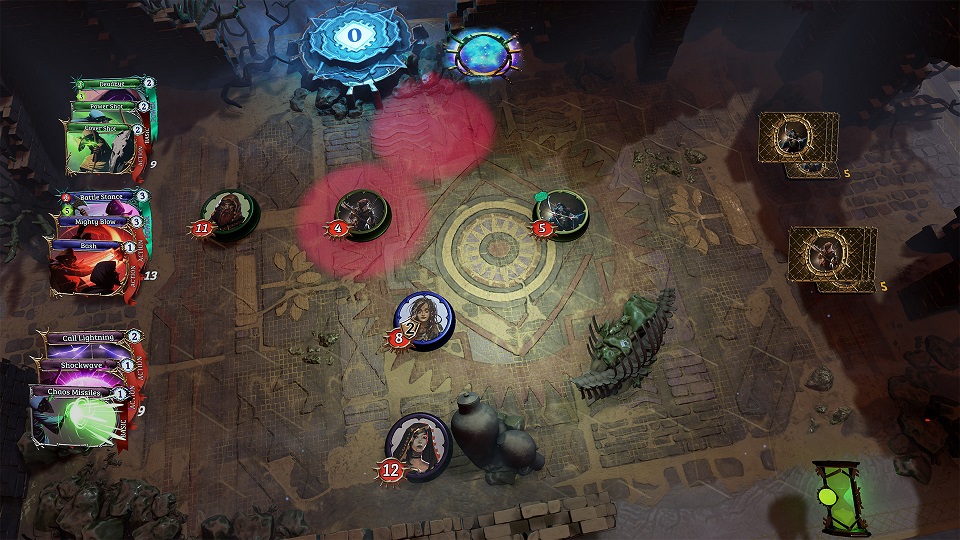 The first is your party’s exhaustion: the more you run around, the more tired they get. It’s easy enough to recharge their exhaustion, you just need to rest — but resting takes food, and ideally, a safe place to camp. If you don’t have either, your party’s exhaustion can drain quickly. Additionally, it takes time to rest, and time is not something you have a lot of: because if too much time passes before you accomplish the next leg of your journey, your party loses morale, and once that bar bottoms out, you lose. So if things go bad and you don’t have the resources to turn things around — there’s not much reason to keep trying.

Fortunately, at least on easy and medium difficulties, more often than not you’ll have enough food, and at least a vague idea what you’re supposed to do. The exception is one of the lore quests, Beacon of Hope, where your first objective is to A) get a big pile of money, B) find the right item that may or may not show up in any store you visit, and C) visit one of the rarer landmarks randomly generated on the map. I’ve played this mode a few times now, and I’ve only managed to get past that point once. Easily the most annoying of the lore missions I’ve played.

But no matter what happens, before long, you’ll eventually find yourself in combat, which is when the game shines… eventually. The mechanics of this particular game are complicated, and so poorly explained in the tutorial that one of the first patches the game enjoyed tried to explain it better, so I feel a bit daunted trying to summarize it, but… I’ll try. 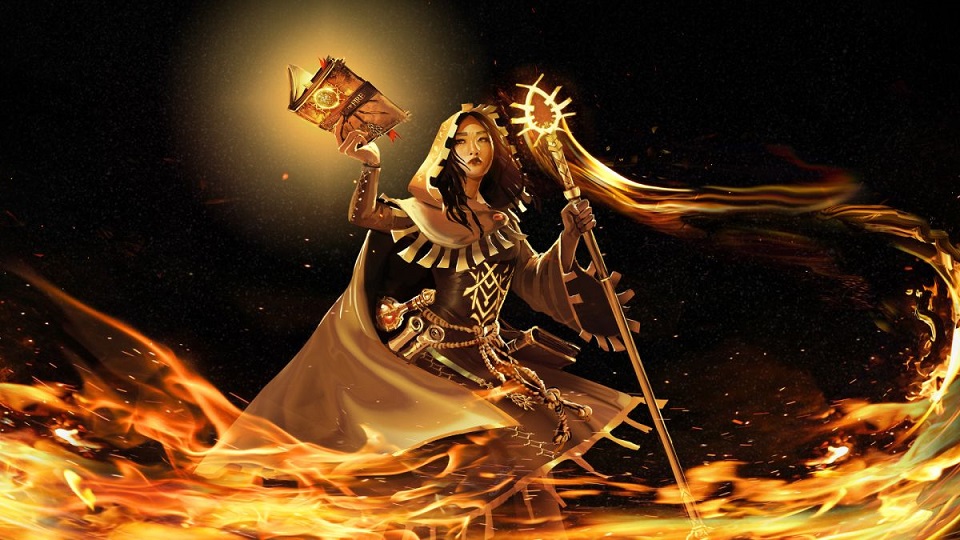 Anyway, some cards are free to play — you throw them down, and you trigger their effects, and life is good. Most, however, have a Willpower cost. However, typically, you don’t start your turn with Willpower: to get some, you either need to trigger a card effect that gives you some (most basic movement effects give you 1 willpower, for example), or you need to discard one of your cards. Each card discarded gives you 1 willpower. Willpower is shared across all characters, so you can discard your warrior’s card to let your ranger play a card, or vice-versa.

However, you can also discard a card in order to move a character who’s card was discarded, or give them extra armor at the end of the turn, which reduces how much damage they take from enemy actions. This means you spend much more time discarding cards in this game than actually playing them, which presents you with an interesting gameplay choice, forcing you to limit your strategic options in order to enable you to play the three or four cards that you think would make the biggest impact on your turn.

However, it gets more complicated. On top of basic movement and attack cards, there are also “power” cards. Power cards are like buffs that persist throughout the game — the most basic being “Prepare”, which, as long as it’s attached to a character, means you start each round with 1 willpower. Interestingly, Power Cards aren’t limited to the character who drew them — your Warrior can play any of their power cards on any other ally. Additionally, it’s possible to “knock out” power cards: they each have their own HP bar, called “resilience”, and once you take enough HP damage to exhaust their resilience, they fall off your character and are re-shuffled back into your deck. 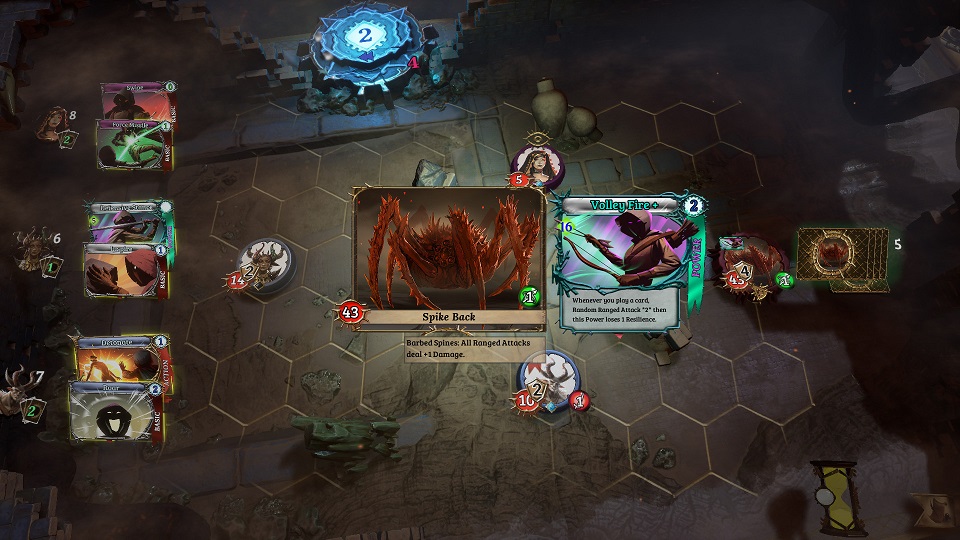 Oh, and unlike most Roguelike deckbuilders, there’s a much smaller emphasis on card removal: while it’s an option, by and large your deck only gets bigger, as you equip better items that also add cards to your deck. Heck, when you level up, you don’t even have the option of removing a card from your deck — you can either replace your starter cards with something else, or upgrade a card in your character deck. This anti-removal emphasis is underlined by an exhaustion mechanic, where every time you shuffle your deck, a new, useless “exhaustion” card is put in your deck — so smaller decks will doubtless get flooded with junk cards the longer a match goes on.

Oh, and of course, there are status effects, like burning, acid, fire, ect. Can’t forget that.

No lie, the combat takes a long time to get used to, and nothing is explained as well as it could be. But when you start to get a hold of it, it becomes very engaging — finding the perfect combo to stay alive another turn, or devastated the enemy ranks, is always a thrill. But the game runs on an economy of scarcity — you never have enough cards, enough resources, or enough options. Which means that when a character is injured or exhausted, and you lose one or more of your much-needed options or resources… it’s all the more frustrating. That makes moment-by-moment gameplay somewhat lackluster… but it also means the moments you have a really good turn are all the more satisfying.

I don’t know. It works for me, and if you’re as addicted to roguelike deck builders as I am, this will probably scratch your itch for a good long while… but no, it’s not about to dethrone Slay the Spire.

Still, that doesn’t mean it’s not worth your time.