6 of the Spookiest Things In Video Games

by pocru on Nov 03, 2019 @ 01:09 AM (Staff Bios)
Comment(s)
It’s Halloween – or at least, it was Halloween four days ago – and while I may be a little late to the festivities, it’s never too late to celebrate all the spooky stuff in video games. And while I admit talking about what happened at Blizzcon would probably be more pertinent (and frankly, rake in more of those sweet, sweet clicks), life is short and I can always do that next week to try to keep the controversy alive for even longer.

So anyway. Here’s my personal list of all the spookiest enemies, levels, and ‘stuff’ in video games. It’s not comprehensive, it’s not coherent, but it sure as hell is content. And isn’t that what we’re all here for? 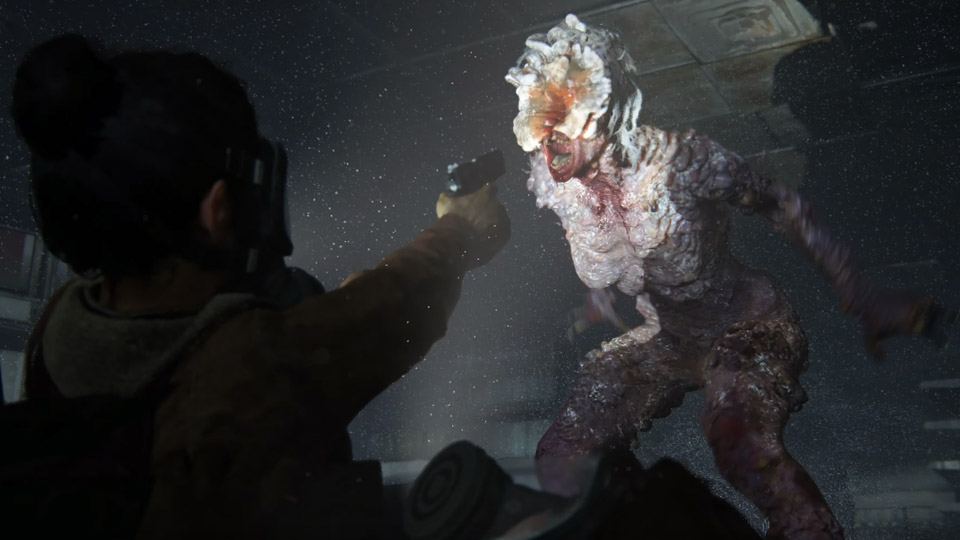 Once you get a few hours under your belt in The Last of Us, Clickers are more annoying than anything: especially if you played like me, where you forewent any notion of stealth in favor of using diplomatic shotgun blasts to start and swiftly end encounters. One solid slug between the eyes(?) or in the chest will send em’ to the ground, and cause all their friends to line up in front of you excited for their turn to take a long-overdue dirt nap.

But those first few hours? Damn.

For one, when all you have is a pistol that only seems to annoy them and a one-use shiv that might as well be hooked up to an air horn, there’s no real way to muscle past them: stealth is your only viable option. Which is awful because once they have their sights (or sound or whatever) on Joel’s candy ass there’s not a whole lot you can do. Run? Most of the arenas are too small. Hide? Hide where they’re using ecolocation or something. Shoot them? Great, you emptied your clip, they aren’t dead, and every other Clicker and Runner in a mile radius is cha-cha sliding on up for their turn. Getting seen by one of these sacks of crap was basically an instant loss and every time I heard one of their stupid click-clacking I wondered why I was bothering to keep this mean old son of a bitch alive.

Stressed me out every time. Even after I died and passed the ‘horror’ threshold, I never felt good or relaxed around these fungal freak shows. At least, not until I got the shotgun. Then the game became fun again.

2) The Iron Maidens in Resident Evil 4

But it was horrifying exactly once: when you were locked in a cryogenics lab with the Iron Maidens. 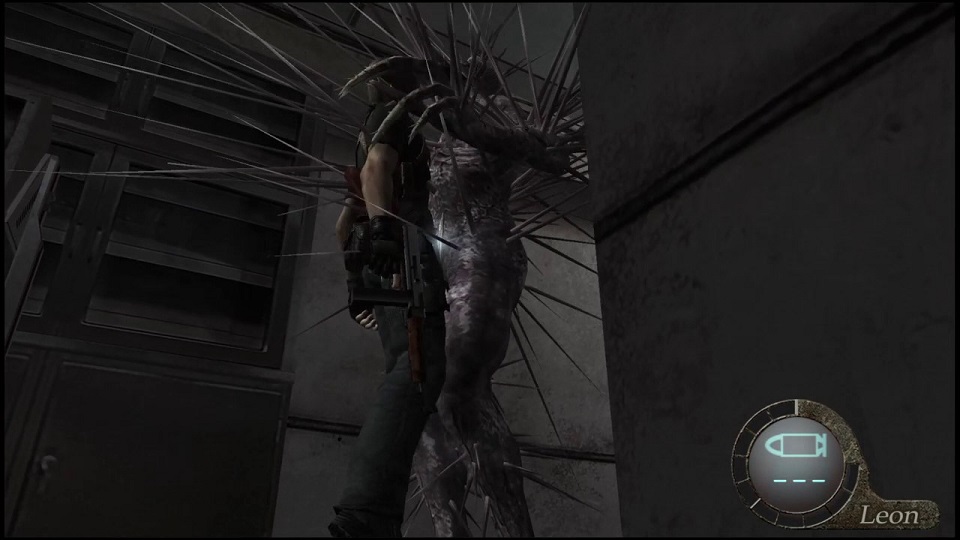 None of your weapons (sans the rocket launcher, of course) worked on it. All you could do was slow it down while you were forced to run past it, through narrow corridors, praying to whatever god would listen that you didn’t stumble into a dead end, looking wildly for something, anything, that could either let you fight back or escape. Once you know what you’re doing, it’s a rather harmless jaunt – but if you seriously don’t know where to find the thermal scope, or that you need to use it to find their weak points and shoot them out precisely, it’s a gauntlet of horror. The damn things are always behind you, slowly lurching forward, promising a painful, gruesome end if they manage to close the distance and wrap their spiky hands around you.

I understand that the recent remake of Resident Evil 2 pulls off a similar trick with Mr. X. Which is the first and only reason I need to never pick the damn game up. I’m not actually a big horror game fan, you see, which is part of the reason I don’t call this list comprehensive.

But moving right along…

Look, you want to talk about the most horrifying moments in video games? Forget about your PT’s and your Outlasts and your… whatever it is horror gamers are into these days. There’s no pre-rendered cut scene, story beat, or jumps care that can match the organic horror of seeing your enemy start the critical hit animation when attacking your favorite soldier in a game of Fire Emblem.

If you aren’t aware, Fire Emblem is a turn-based tactical game where you and a small army have to plow through what is usually a much larger army of mooks. Careful placement of your soldiers is key as you carefully advance across the map, but there’s only so much that you can do or plan for: because at the end of the day, every attack has a chance to miss, or be critical.

Oftentimes, this can be a saving grace: when you make a bad move and an attack that would surely kill your soldier (which, in case you weren’t aware, suffers from a bad case of permadeath) misses by some miracle, it’s a rather relieving moment. And sometimes – actually, quite a lot of times – your troops will deal critical hits that will kill enemies faster than you planned, which can sometimes open up new strategies for you.

But if you need to let an enemy attack you and they happen to land a critical hit, killing your soldier instead of just injuring them, all of your best-laid plans can be left to ruin, forcing you to continue without them or, more likely, reset the whole battle in order to try again. It’s truly a horrifying experience. 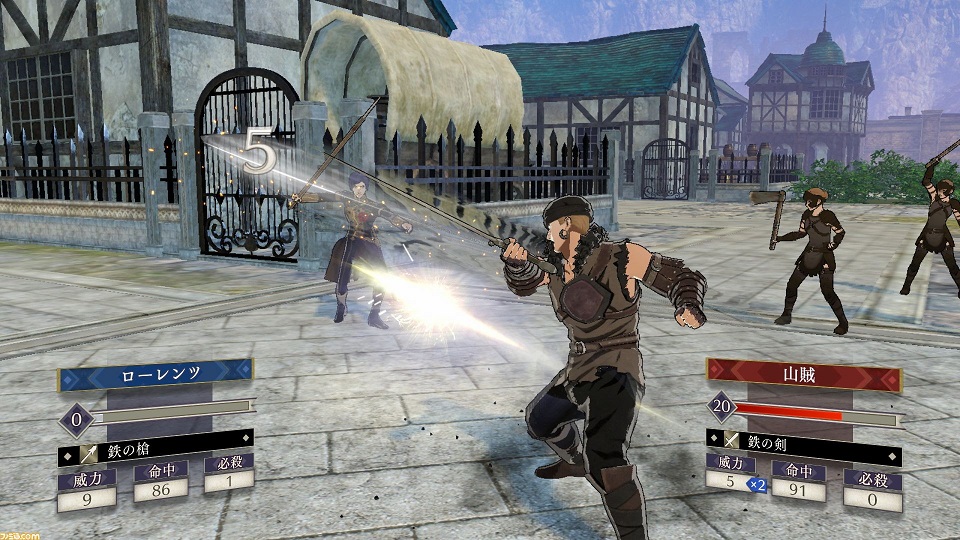 Fortunately, Fire Emblem: Three Houses, the most recent addition to the game, allows you to just roll back time a few turns if you want. But since enemy critical hits will always trigger once they’ve triggered once, it’s still very possible to find yourself in a situation you simply can’t win.

4) Discovering your favorite studio is owned, wholly or partially, by Tencent or any other Chinese conglomerate, which in turn forces the studio to both bend the knee to an oppressive Chinese government and silence any voices that rise up in its community that express solidarity with people struggling under the regime.

Have you heard of Sea Salt? It’s a fun new little game out on PC and the Switch, where you control a small to large mob of eldritch horrors to rampage across a seaside village to extract revenge against a population who has wronged you, Dagon, dark god of the depths. It’s a very simple game that has very simple controls – your mob follows a cursor and attacks whatever they’re closest to when you hold down a button – which can make what might otherwise be a straightforward combat encounter far more complicated than it needs to be.

Y’see, the villagers you’re attacking have realized that Dagon’s minions are stupid Cretans who can’t resist the allure of attacking wooden barricades, even when there’s a dog tearing them apart, a guy with a shotgun blasting them into confetti, or a weeb with a sword whispering “not bad, kid” as he eviscerates your horde. It doesn’t matter what else is on the screen or if there’s anything that should probably grab their attention before they worry about stationary objects that pose no threat whatsoever, they will make sure every last wooden barricade is destroyed completely before they turn their attention to the guy who’s been cooking them alive with their flamethrower for the past half-minute.

It’s a pretty significant barrier (pun intended) in what would be an otherwise great game, and it’s certainly a special kind of game where I can wade into a horde of angry, gun-wielding cultists and be more concerned about a couple of wooden planks that’s a dozen feet behind them. 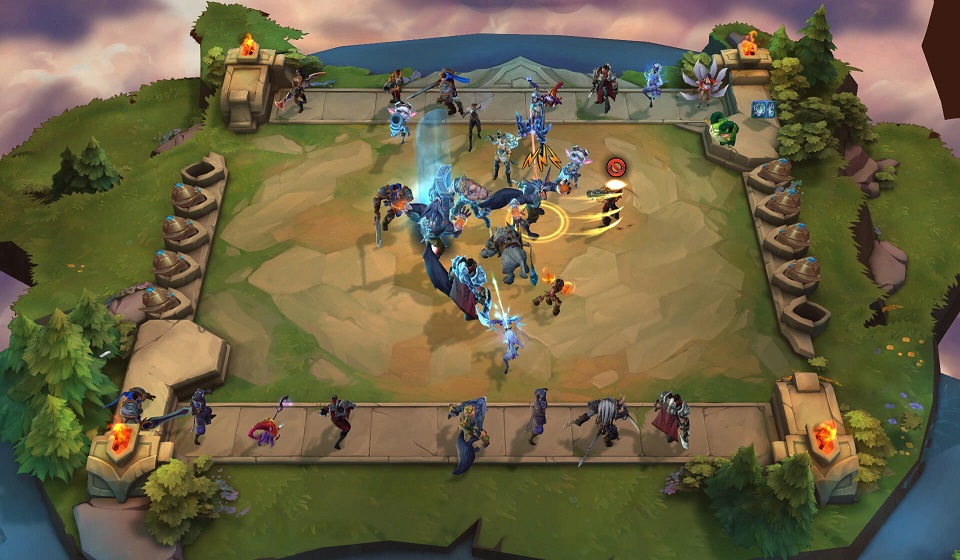 Look, I get that there’s strategy in Teamfight Tactics and other auto-battler games. I know there’s a legitimate strategy at play that smart people can deploy in order to improve their game and play more consistently. But even understanding all of that, Teamfight Tactics still feels like a gamified, competitive lottery, where the only real factor standing between you and sweet victory is how much the computer likes you.

To that end, when you’re losing (and I lose a lot), but you have just one elusive buy standing between you and a much-needed upgrade on what may or may not be the star player on your team, each and every round becomes an exercise in stress as you start spending each and every coin you own on re-rolls looking for that exact thing you need. And when you draw blank after blank, and hope begins to feel faint, you understand a true, existential horror that has plagued humanity for countless years.

The horror of realizing there is no god, death is a void, and life is a meaningless distraction on the way to oblivion.

Or maybe I’m reading too much into it.