An unpleasant experience from start to end.

by pocru on Sep 27, 2020 @ 02:41 AM (Staff Bios)
Comment(s)
2020 has taken a lot from us. It’s stolen our summer, it’s stolen several great actors, a whole lotta trees in California, our security, our excess bacon, a lot of gaming conventions and meetups, probably a few new Smash Brothers characters, and maybe even hope, depending on how the election in November goes. But of all the things 2020 has stolen from us, I have to admit, the Dragon’s Dogma Netfllix anime feels the most personal. And it hurts the most. 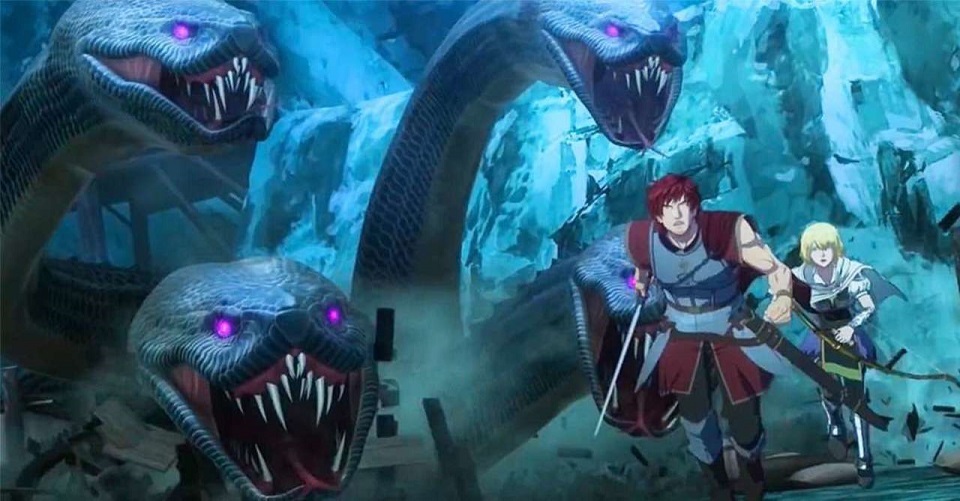 Because gosh darn it kids, that crap’s bad.

It’s not even, like Castlevania bad? Where there is still some underlying quality that makes it kinda fun to sit through the bad or boring parts. It’s just bad-bad. Boring, stupid, and inauthentic from beginning to end, and it breaks my baby heart to see what I think is one of the best games of the last decade given this rather crappy “adaptation”.

The one and only clever thing that the Netflix anime adaption of Dragon’s Dogma did happened well before the anime’s release when they put out this character trailer.

So to understand why this is clever, you have to be familiar with the game itself, so here’s a crude attempt to explain it. The trailer above introduces the main character, his pawn companion, the dragon, and two other characters: Oliva, the main character’s wife, and a cheerful sidekick kid called Louis. Olivia bears a striking resemblance to Quina, an important NPC and strongly-suggested romantic partner for the player Avatar in the game. Louis, on the other hand, is very much an original character.

And in spite of the importance these characters are presumed to play thanks to the trailer, and Quina’s role in the games, both Olivia and Louis are killed off in the first episode. A happy family getting killed isn’t exactly the most original premise in the world, but by selling up their importance in the character trailer (at the cost of other, more important characters that show up later in the plot) and making one of them resemble an essential NPC from the games, the creators of the show made it a little bit surprising when the dragon came to town and wrecked their stuff.

Unfortunately, that, and the kinda fun fight scenes with weird CGI monsters, are the only credit I can give to Dragon’s Dogma. Because otherwise it’s kind of an insult to the game its supposed to be based on.

See, what made Dragon’s Dogma good wasn’t just the weird multiplayer, thrilling combat, or the shocking openness of the world. It was the fact that the story took a rather iconic and overused fantasy trope and twisted it into something genuinely mind-bending and awe-inspiring.

The anime and the game begin the same basic way: the future Arisin is out doing crap in their tiny seaside village when the dragon, which hasn’t been seen in many years, comes a knockin’. In the video game, the future Arisin is the only one with the courage to attack the dragon in spite of how obviously weaker they are to it, and the Dragon, impressed, turns the character into an Arisen by eating their heart and flying off, leaving the city relatively unscathed. This is important because, spoiler alert, the Dragon isn’t really a “bad guy” in the video game: rather, it’s both a herald and a test, a way for the God of the world to find someone suitable to replace them. The dragon just needed to cause enough trouble to find a worthy challenger – otherwise it’s more or less a force of nature, a test for the world, disguised as an agent of evil. 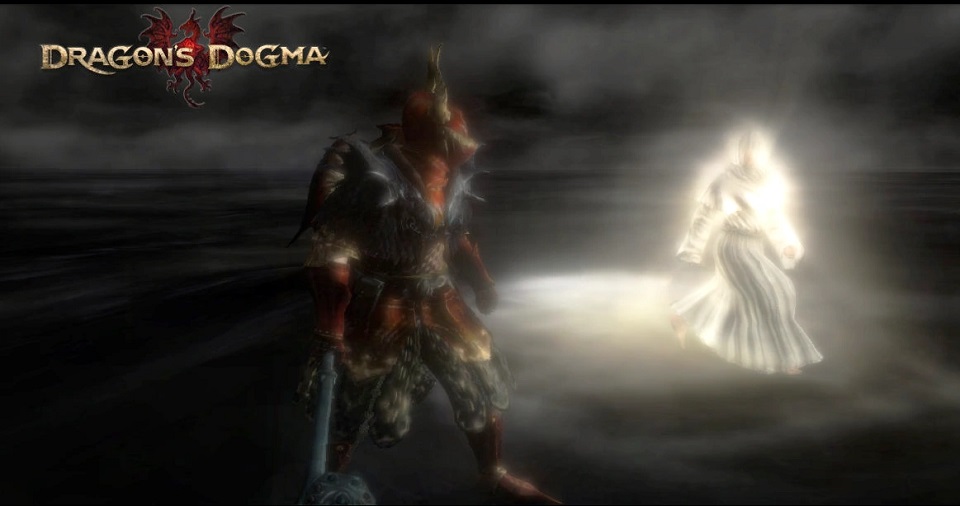 In the anime, it destroys the whole town, kills the first bunch of people who challenges it, and then decides to make Ethan an Arisen because screw it, why not? So the dragon kills his wife and his preppy child sidekick, eats his heart, and is like “yo if my murdering your family pissed you off come fight me”.

In both versions, the Arisen is soon joined by a Pawn. Now, in the games, pawns are fascinating creatures: they come from a sort of otherworldly hive mind, emotionless flesh golems that exist to serve Arisen in every world, and who absorb parts of their Arisen as they travel together. The link between Arisen and pawn becomes vitally important late in the game and during the Epilogue, when a pawn who served their master inherits their body and earns the chance to become human… or goes mad if abandoned or corrupt. The relationship between pawn and Arisen becomes more pronounced in the DLC, where it is sort of the fulcrum on which the entire plot of the “Dark Arisen” spins.

In the anime, she just shows up and does stuff. She exists as a relic of the games, but only in a purely functional way – she helps out Ethan, the main character, and occasionally drops blocks of emotionless logic on him. That’s it. They stripped away one of the most fascinating aspects of lore from the original game and reduced her to an exposition dump dressed as a woman.

Anyway. The anime is split up into seven episodes, each one named after one of the seven deadly sins and themed after it. Episode 1 is wrath, because our main man Ethan isn’t too happy about his wife and child and sidekick being killed. Episode 2 is gluttony, and while I was able to give Episode 1 the benefit of the doubt, Episode 2 was when I realized that this was just a bad show.

See, the basic plot of Episode 2 is that there’s a big ol’ Cyclops in the woods. People are scared of it, so the local baron suggests they sacrifice a young child to it every couple of months. He also takes peoples food under the pretense that it will help somehow? Anyway, main character shows up, and in the process of just being a swell fella, he rescues a girl who was due to be sacrificed and promises to kill the Cyclops. In doing so, he discovers that the local baron actually controls the cyclops, and uses it to scare people so he can keep stealing their food and money. Ok.

So they kill his henchmen and the Cyclopes in a fight scene – which, again, remains fairly fun – and then Ethan’s all like “Well we’re gonna take you back to town and tell the people of your crimes”.

And then for some reason, we cut to him, standing defeated on a hill, looking down on a city in flames, shocked – devastated – that a group of angry, starving peasants would somehow take the news of this betrayal badly. We see a cut of the starving children he was helping before greedily shoving fruit in their mouths, which makes sense because they were on the verge of death earlier, but for some reason we’re supposed to see their eagerness to eat as a bad thing? It’s sure framed that way. As if it’s entirely unreasonable for people to eat food when they’re friggen’ hungry, and maybe be a little unfriendly while they’re at it, considering that people have mouths to feed and more reason than ever to distrust authority.

So yeah. Ethan is disillusioned about the goodness of people. 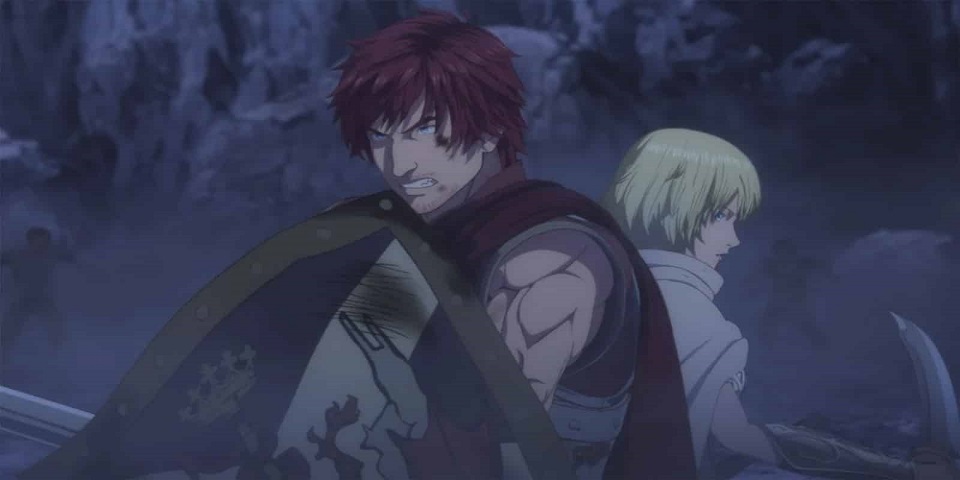 Episode 3 is where the anime completely lost me because it starts with a goblin rape.

Yeah. Straight outta Goblin Slayer. Rapin’ goblins.
…look, I’m not the kind of person who thinks sexual assault is off limits in media or anything, but you gotta treat it with at least a little tact, you know? It’s not okay to just show a woman about to be raped by goblins, her breasts exposed and her legs splayed suggestively, even if she is saved at the last minute. It’s insensitive, it’s sexist, and frankly, it’s just gross. I don’t need to see Goblins about to rape a girl to know they’re bad. I’ve already seen Goblins murdering people, I don’t need ADDITIONAL reasons to root against them. It adds nothing to the story except to make it “darker” and “edgier”, which makes sense because you get the idea that this anime is trying desperately to be Berserk.

Anyway. I’ll be perfectly honest, folks, after the Goblin rape, I was done. It was just that bad. But I still wanted to see how they would botch the ending, so I skipped to the last episode and I watched the big confrontation between the Dragon and the Arisen.

It was exactly as stupid as I thought it would be.

While the Dragon and the Arisen traded clunky blows, the Dragon tried to convince the Arisen that humans were just the worst, and cited all the deadly sins the Arisen encountered on his way to the Dragon as proof. The Arisen said “no you’re wrong cuz reasons” and then killed the Dragon.

And then the Dragon was like “Haha psyche because you didn’t kill me with a pure heart now you gotta be the Dragon”. Arisen begs his pawn to kill him, his pawn breaks character and shows emotion, refusing to do so, he turns into the dragon and orders her to protect humans from him. That’s the entire show.

So yeah. A pretty crappy show and a pretty crappy time, and the only thing it really had to do with Dragon’s Dogma is that it used the game’s monster designs, location names, and the occasional spell. Other than that, it had about as much to do with the game as a pair of moldy shoes.

But hey, now at least I’m genuinely excited for season 4 of Castlevania.

Taking another stab at the stab-heavy series.

That's probably really cool for somebody.