by pocru on Jan 17, 2021 @ 02:11 AM (Staff Bios)
Comment(s)
So we had a big ol’ holiday break a few weeks ago, and for the first time in my young life, I spent Christmas and the days around it by myself. It wasn’t exactly a joyful season for a host of reasons, one of which being the fact I was trapped in my apartment for three weeks, but fortunately, I had something that the people who quarantined during earlier pandemics could only dream of: video games. A heaping helping of video games.

Since I’m not really good at reviewing stuff and a lot of these games are super old, I didn’t think it would be appropriate to write my thoughts on them in a bunch of separate articles. So instead, I’m going to give you my thoughts and impressions in this one, single, abridged article, so if you ever find yourself trapped in your room for 21 days, you’ll at least have some recommendations for titles that really pass the time. 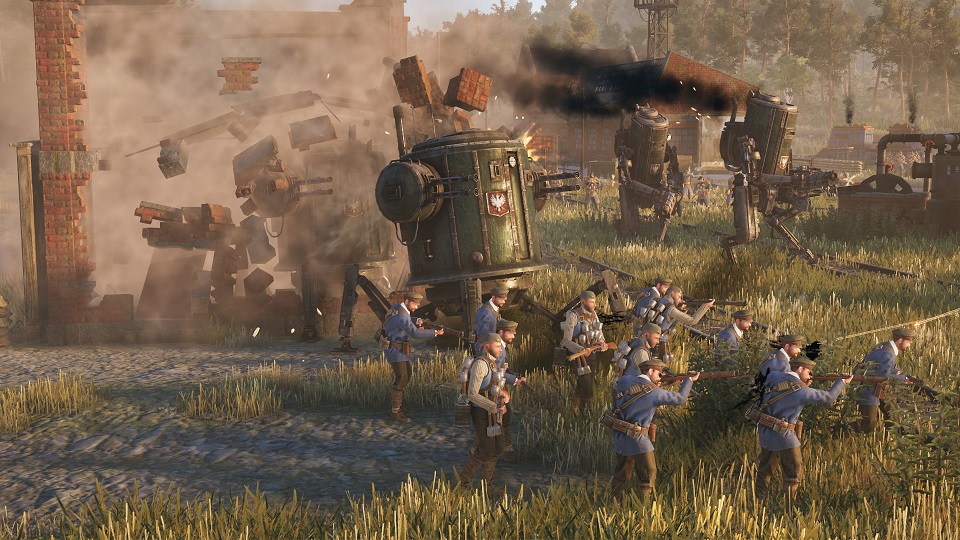 A lot of the games on this list were picked up because they had some form of Co-op, and I wanted to play remotely with the brother who, under other circumstances, would have come over to visit over the season. Iron Harvest is one such example, an RTS based in a Steampunk-era post WW1 Europe where countries commanded huge, killer mechs that were created by Nikola Tesla, AKA, nerd Jesus.

Mechanically, the game plays a bit like Company of Heroes, except it’s approximately a million times more simplistic. You pick one of three factions, who have functionally identical infantry units, a varied roster of 6 different mechs, and three unique“heroes” that can accomplish different things on the battlefield. You collect two resources — iron and oil — build an army, and sick em’ on your opponents in a game that’s generally less about tactics and more about trusting your goon squad has more firepower than the goon squads it fights on its way to the enemy base.

There really isn’t much to it, if I’m being honest. You can only really build four structures with your engineers: your main base, a workshop for mechanical units, a barracks to recruit infantry, and a bunker that’s pretty much your only option as a defensive structure. Resources are easy enough to get, but you don’t need to be swimming in them to max out your army count if you’re smart. It’s simple to the point where it would almost be boring, save the fact the sheer spectacle of steampunk-style mechas crashing into each other has a lot of value.

On top of being simple, the game has plenty of faults: the UI is objectively terrible, and makes managing troops way more difficult than it has to be. The co-op is a nice touch but it’s awkwardly implemented and you often stumble over each other as much as you help. And unit abilities are finicky at best.

But again, the sheer spectacle of the game, and getting to watch robots smack into each other in European trenches, makes up for a lot. Even if it’s not what I’d call incredibly strategic. 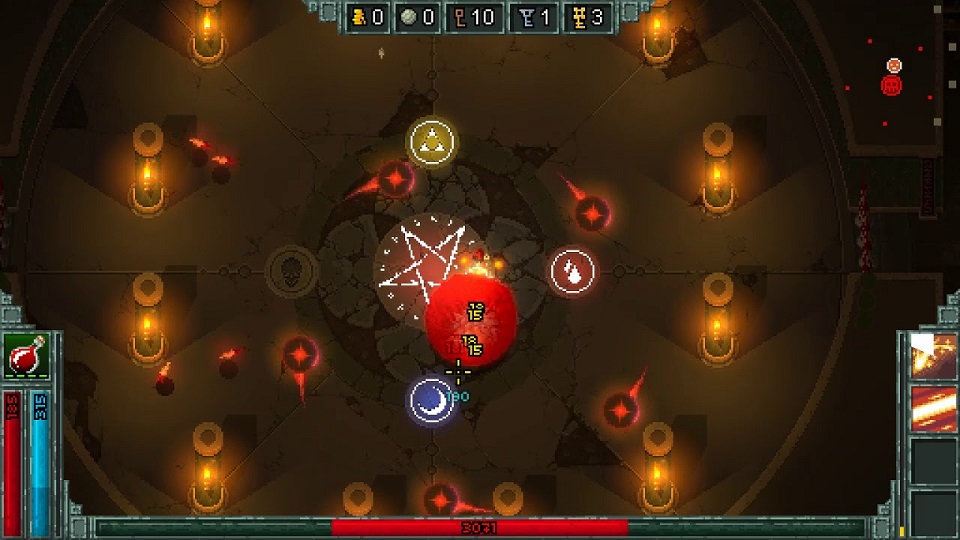 Released in 2018, and with three DLCs released for it since, Heroes of Hammerwatch is basically Hammerwatch, but with a significantly more robust progression system, where you can level up your class, your abilities, your town, and of course, the scat-loads of items that are waiting for you to plunder them in the keep you’re trying to loot.

Anyone whos played a Gauntlet game knows more or less what to expect with Heroes of Hammerwatch: you enter an area, there’s a lot of loot, and even more enemies trying to kill you to reach it. Sometimes you find items that can power you up, sometimes you find food that can heal you, but you’ll always find new monstrosities around the corner who can wreck your plans if you’re a little too slow to react.

Like Iron Harvest, the game is magnificently simple, but unlike iron harvest, the core gameplay loop is so satisfying it’s hard to notice. You run into enemies, a whole lot of big numbers flash, and the enemies are gone. That’s not to say some classes aren’t more satisfying than others: Paladins might have a very useful shield and rangers might have excellent damage, but nothing beats grappling onto a distant enemy as a thief and hitting them a hundred times while they’re stunned, watching a cluster of lightning-spewing gargoyles cleave through waves of enemies as a Warlock, or sending holy light burning through your foes as the Priest. Like the games that inspire it, it has a simple core loop that’s been refined and perfected enough time to give it almost endless replay value.

Great game. Highly recommended, especially if you have people to play it with. 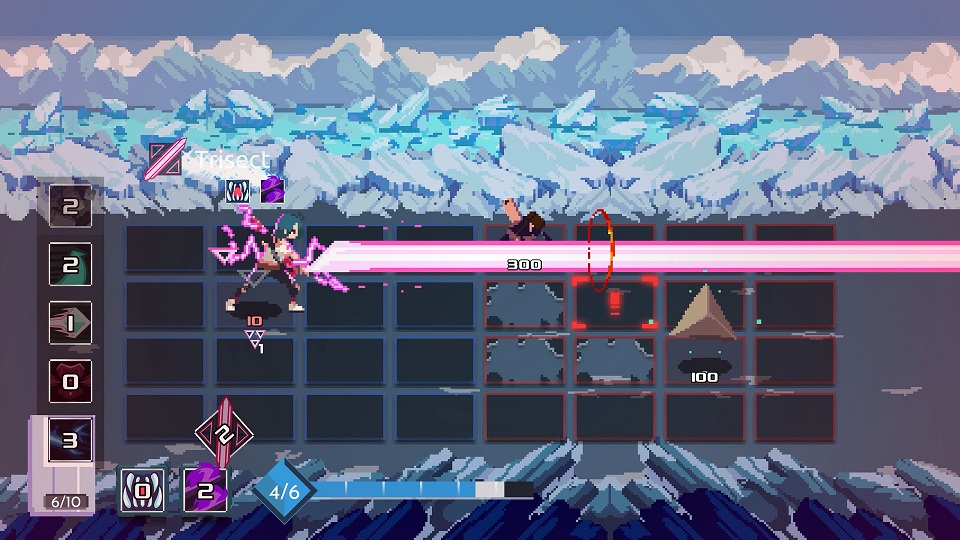 One Step from Eden

I discovered recently that I really, really like roguelike deck builders, thanks to the 200+ hours I’ve spent in Slay the Spire. I’ve since gone out of my way to look for more, and that’s how I stumbled onto One Step from Eden, otherwise known as the Megaman Battle Network roguelike.

There’s no real way to talk about One Step from Eden without referencing the game that so clearly inspired it, because it really is just Megaman Battle Network. You are on a 8x4 grid, with you on one side and your opponents on the other, and you throw spells and abilities at each other until one of you dies. You can move on your tiles, the enemies will move on theirs, and as you progress through the game you’ll build up a deck of spells, a roster of runes, and level-up abilities that will help you survive increasingly difficult encounters and tougher bosses.

Even better, there are a lot of characters to choose from (especially if you’re willing to mod the game), which all have their own unique play styles as well. Terra, my favorite character, likes to break tiles, and it’s very easy to build a flow-focused deck around her that takes advantage of the reduced movement space. That said, I’ve only ever won the game with Shiso, the silent-but deadly assassin whose bullets deal more damage the more money he has in his pockets. And that’s largely because by late game his mana-free attacks were dealing 300, 400 damage per hit.

While not exactly what I was looking for, given its frantic, twitch-based gameplay, the game charmed me nonetheless with its personality, its varied encounters, and the fact that the spectacle (there’s that word again) is extremely satisfying, especially if you happen to be good at the game and build a deck that works, which generally, I don’t. Still, the fact I occasionally pick it up from time to time still means that it has some compelling qualities, 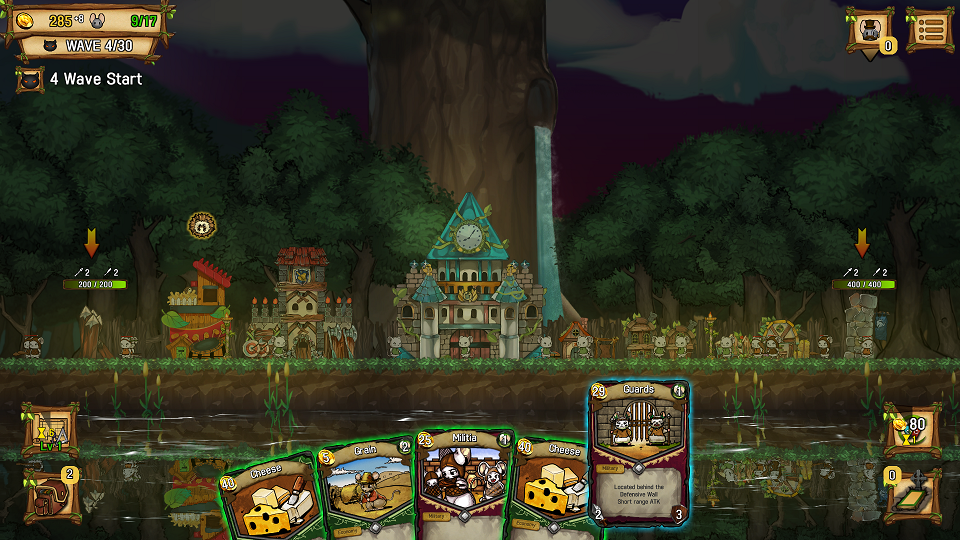 The only game on my list that’s relatively new, Ratropolis is another roguelike deckbuilder, although instead of cutting through random enemies to a hitherto unknown destination, Ratropolis sees you trying to raise and manage a city of rat people that’s being besieged on all sides by mutants, monsters, and rival animal tribes. Using several different kind of cards — one-use building cards that give a persistent bonus, economy cards that let you increase your gold or population, and military cards that protect your city from the incoming invaders — you need to survive 30 rounds of attacks from increasingly difficult foes.

Ratropolis has a lot going for it. For one, it’s pretty darn cute, and it commits to the whole “everyone is a rat we love cheese” business, but it’s also not afraid to skirt on the darker edge of things, with random events giving you the power to exile or assassinate enemies, do some light genocide, or reward cowardace at the cost of making your soldiers unhappy. The card effects aren’t as interesting or rewarding as, say, a perfect combo in Slay the Spire, but while the moment to moment gameplay isn’t super exciting, across the whole 30 rounds you generally have a good mix of relaxing management and tense combat situations (although there’s no strategy to speak of, you just have to hope your defenders are stronger than the attackers).

That said, the game might also be the weakest game on the list. The biggest problem is that 30 rounds is just a little too long for a roguelike deck builder where you cant’ save and quit mid-run. It takes about 40 minutes to end each session, and generally, when I’m in the mood for this kind of game, I’m trying to kill 10 or 20 minutes, not nearly an hour. Additionally, since the only lose condition is enemy monsters overwhelming your city, the game is significantly easier when you’re playing the military commander, who has the best fighters, than any of the other leaders the game offers for you to pick at the start.

So there you go. Four great games to try when you have some free time. Like during the next pandemic, for example!

Anthem Next is Canceled, Bioware Giving Up

Anthem will continue running, but it won't get the revamp it needs.

Konami is Turning Frogger into a Game Show

Make-A-Wish is Auctioning a Chance to Feature in Starfield

As an NPC. If you have a few thousand to spend.