Short, sweet, and chaotic: a perfect combo for a deck-building game.

That's a weird confession, but I very much doubt I'm the only one who sort of accidentally discovers they like a genre of game more than they originally assumed. That said, if you were to ask me why I like card games so much, I think I'd struggle to give you an adequate answer. Thinking on it for the purpose of this article, I think it's because card games often pull on the same kind of gambling-adjacent thrill that Loot Boxes use in order to get people to spend moeny in games. Every time you get a "pack" in a card game, it's genuinely exciting to see what cards you've unlocked... and every time you draw a card in a match, be it on the first turn or the last, you get this sort of anticipation and excitement as you hope you'll draw exactly what you need to either stave off a defeat or cinch a victory.

Plus, they're games that make you feel smart. Every deck you build in a card game has a purpose: it feels good when the stars align, you draw exactly what you need to acheave victory the intended way, and you make it happen. But it's also satisfying to use lateral thinking to grasp victory in unexpected ways. While Legends of Runeterra might not have much staying power for me, since I pretty quickly get the cards I want and I stop being excited whenever I unlock a new chest or pack, of all the card games I've played it's the one that's allowed me to use the flexability of cards and my deck to pull out unexpected victories. And I deeply appreciate that.

On a different and apparently unrelated note -- I really like tower defense games.

That one's a lot easier to explain. Tower Defense games are like narrower strategy games: managing economies, unit upgrades, positioning, all of those elements that make strategy games both interesting and mentally exhausting are simplified and streamlined. Sure, you still have to think, and a lot of Tower Defense games do ask you to make split-second decisions and react fast to changes in the game state, but on the whole, there's a whole lot less mental gymnastics: you build the defenses you want to build, you see how they work out, you hope for the best. Plus, there's just something innately satisfying about watching waves of enemies throw themselves at your defenses and watching them break.

Oh, and also, I like idle games, and oftentimes, Tower Defense games have that energy to them. A bit more complicated and thoughtful, for sure, but something you can sort of pick up and play idly while you've got something else going on. 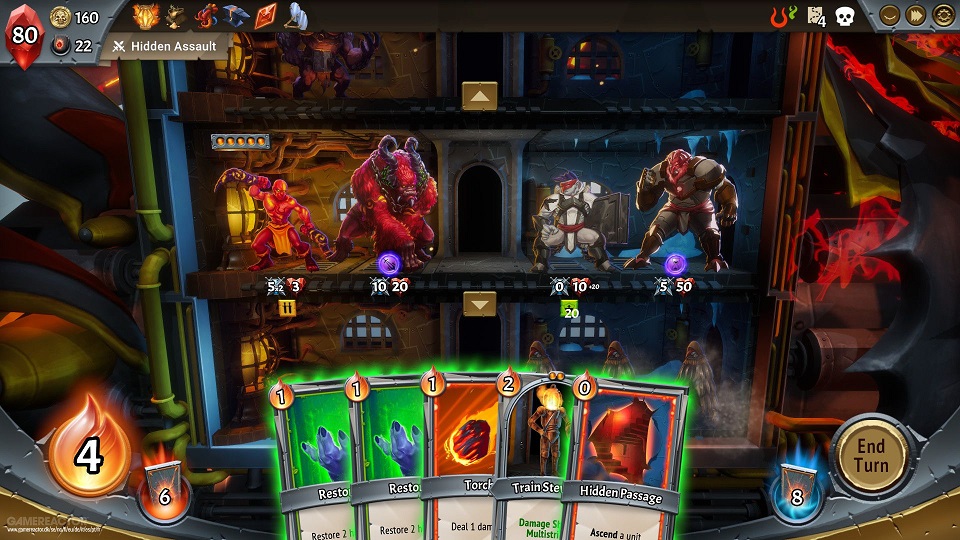 Given my two loves, it shouldn't be surprising, then, that I've fallen hard for a little game called Monster Train.

Monster Train has a story, but I'm not quite sure I get it: hell and heaven had some kind of pact, and now that pact has been broken. Heaven nearly conquered hell and things seem... grim? But as it so happens, you have a Pyre, a crystal that can rejuvinate your nearly-dead destination, a train to carry that Pyre, and a one-way track leading directly to the heart of Hell. All you have to do is protect the Pyre as you journey across the layers of hell from the armies of heaven, humans, and the clipped? And feathered? I don't know man the lore is weird.

Fortunately, you're not here for the lore.

Monster Train, as I mentioned, is a mix of a card game, a tower defense, and a rougelike, a genre I'm on the whole ambivalent about which is why I didn't mention it in the introduction. You select two "Clans" of demons, a primary one (which will determine who your hero unit is, as well as some of your starting cards) and a secondary one (which will offer you unique units and spells), and you get an automatically generated deck from cards pulled from those two clans. 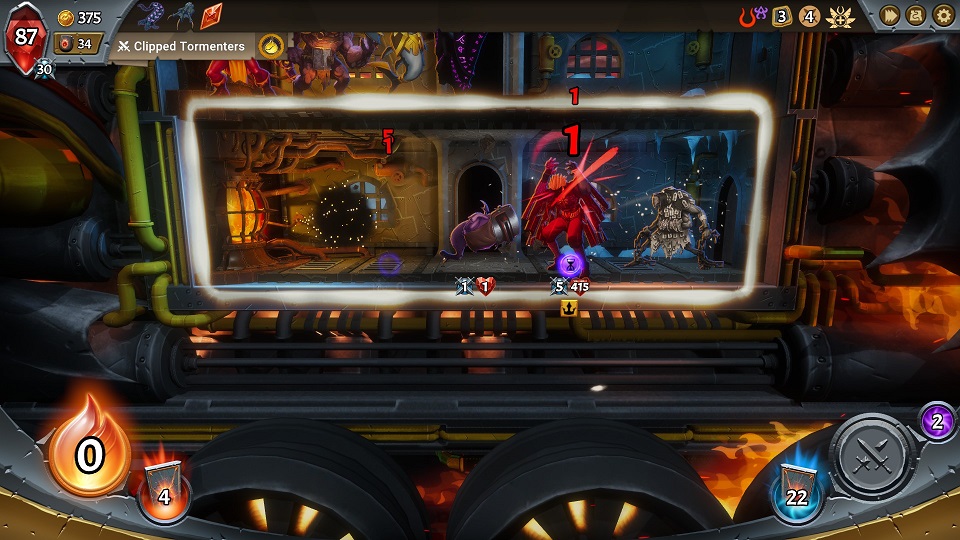 You then have to use those cards to set up defenses on three "layers" of your train, dealing damage to attackers as they climb up to try and reach your Pyre. Each turn, you draw a certain number of cards, and you get Amber, a resource you need to spend to play both units and spells. You can play as many cards as you can during that time, and once you're either out of amber, cards, or options, you end your turn. Enemies attack your units, your units retaliate, and once everyone's effects have resolved, the attackers climb up a rung of your train, closing in on your Pyre.

The different clans make up the backbone of the game.

Hellhorned are your typical bruisers, which focus on dealing damage, increasing armor (which is like a second HP bar), and summoning imps, which are weak but cause interesting effects when they're summoned.

Awoken focus on tanking and regenerating health, as well as drawing extra cards and damaging people who attack them. That said, they have an off-build as sweepers, since they have a lot of aggressive spells and units that can attack quickly, multiple times, or whole rows of enemis at once.

Stygian Guard are your spellcasting clan, with a lot of aggressive, damage-dealing spells that are more powerful than other cans offer. They've also got a "Frostbite" mechanic, which functions like poison in normal games.

Umbra eat each other for buffs, and can improve each layer of your train so it can accommodate more units. I guess you would call them the "horde" faction. They've also got lifesteal, which means your units heal whenever they deal damage.

Finally, the Melting Remnant clan is all about having units that will only last a certain number of turns, burnout, and then re-making them later with longer wicks and better stats.

But that's not all: artifacts, special items that give your deck-wide buffs, also change the state of the game, and can make or break any given run. It's all well and good to have an artifact that, say, increases your units HP by 3. But others, like the ones that let you draw a free imp every turn, stops rage or frostbite from deteriorating every turn, or allows you to eat multiple units multiple times, can be both game-breaking and genuinely exciting to draw, because you know they're going to be the thing that helps you pull out a victory. 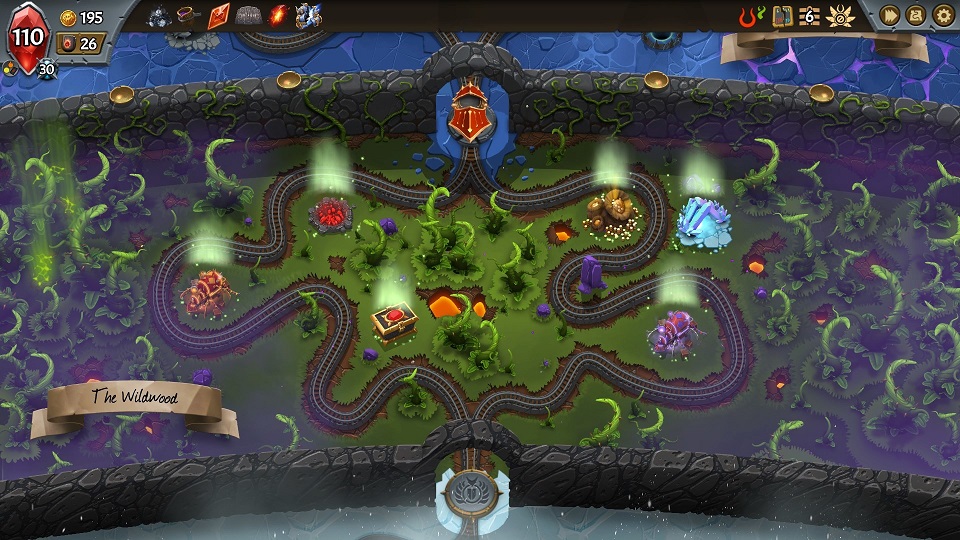 Not that your foes make it easy: they scale really hard really fast, and the 2-damage fireball you start with is going to very quickly become a waste of space in your deck unless you upgrade it, or purge it from your deck entirely. Indeed, finding opportunities to get rid of cards that are taking up space in your deck is every bit as important as finding complementary cards, because you only have so much ember to spend and so many cards to draw. When you know you need that full heal spell in your deck but you draw another Train Steward, it does not feel good.

Plus, they have all kinds of tricks at their disposal: some enemies get stronger as their allies die. Others get stronger when you cast spells on their layer of the train. Some can skip whole levels of the train to race for your pyre. More still use the same tricks you do: spikes that damage your attackers, healers that undo your damage, armor to block damage altogether. Every round, you can also choose to willingly buff your enemies for better rewards at the end of the mission, which become basically obligatory the harder you make your run, and you need every coin, unit, and artifact the game is willing to dangle in front of you. 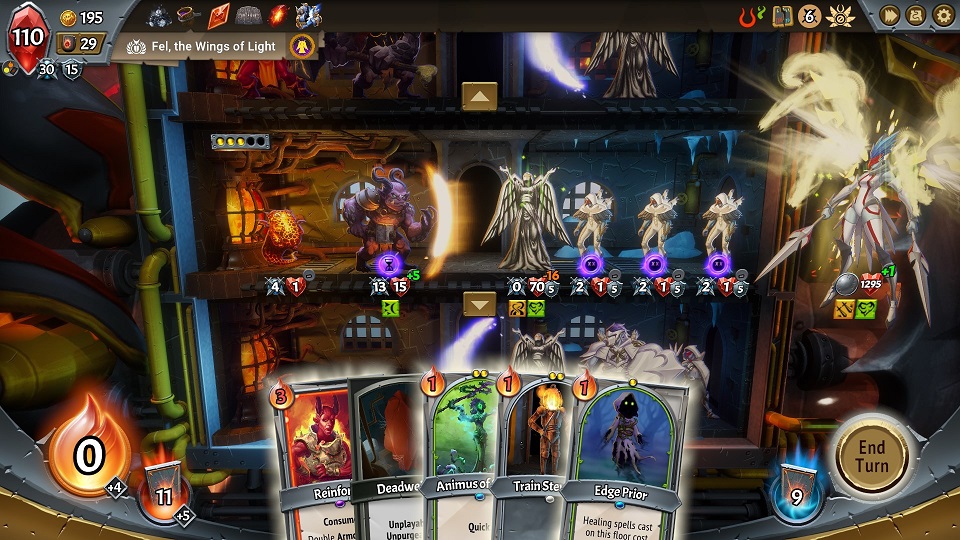 Is it a perfect game? No, far from it. For one, the factions don't have innate synergy. Hellhorn and Umbra work great with Awoken, but Athey woken does not mesh well with Melting Remnant, or generally speaking with Stygian Guard. Melting Remnant has amazing synergy with Hellhorn and Stygian Guard, but they're terrible with Umbra. Maybe I lack the creative application or luck needed to make these combinations work, but it feels like only having five factions with very selective synergy makes the game feel pretty small.

This isn't helped by the fact that there's actually not a whole lot of content. It took me about 25 hours -- enjoyable hours, mind you -- to unlock all the cards the game had to offer, at which point, it becomes a little less exciting to do runs, because you're really just working to beat it at higher difficulties. Without seeing what cool new card I could unlock around the corner, my motivation to play it as obsessively has dwindled somewhat.

That said: it's still one of the best games I've played this year, and for the price, it's definitely worth your time. If you like deckbuilding roguelike tower defenses, anyway.