Valheim Does More With Less

by pocru on Mar 07, 2021 @ 02:42 AM (Staff Bios)
Comment(s)
Let it never be said I’m afraid to bow to the latest trends, because in the latest in my ongoing series of semi-reviews, we’ve got the one, the only, the legendary Valheim. 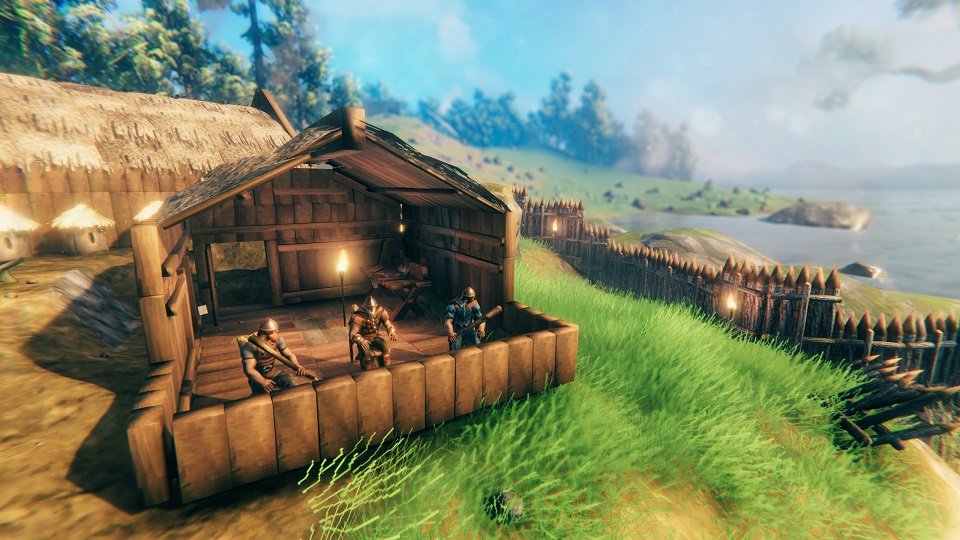 When I first heard about Valheim, I was curious, but largely disinterested: while I have only recently discovered my addiction to deckbuilding roguelikes, I’ve known for a long time that “survival” games weren’t my cup of tea: games like Don’t Starve, Raft, Rust, and others generally annoyed me more than entertained me, because more often than not playing them felt like an unending list of chores that you had to juggle expertly in order to unlock the ability to actually play the game, which was generally lackluster. I tried really hard to get into Don’t Starve, since my brother really liked the game and its co-op mode, Don’t Starve Together, is praised as one of the best the genre has to offer, but between lighting, rest, food, and shelter, I felt like I spent more time racing against the clock and wishing for good luck. And in the odd times I did have a full stomach and a rested hero? Well… I was a little lost on what to actually do. I understood I had to build certain stuff, but finding the materials to make that stuff was daunting and boring.

It might have worked for some people, but it didn’t work for me.

I’ve been giving survival games a pretty wide berth ever since, but desperate times lead to desperate measures, and between the pandemic forcing me to stay indoors longer and exhausting my usual go-to list of games, well… I figured I had nothing to lose to at least give it a try. And now, 20+ hours later, I can say that while Valheim won’t change my mind about survival games, I can say that its particular alchemy works for me. And thankfully, I know exactly why Valheim works, where all other Survival Games have failed, which makes it really easy for me to write and articulate articles like this.

But first let's start with the basics: what exactly is Valheim?

Valiem is a survival game, obviously, set in the Norse afterlife, and made by the folks at Coffee Stain Studios, the people behind Satisfaction and Deep Rock Galactic. You are a brave warrior who died, and rather than going to Odin’s side in Valhalla as you might have assumed, you’re whisked away to a largely uninhabited realm where Odin’s enemies are lurking. To earn your spot in Valhalla, first you have to find and kill five powerful monsters, and once you do, you’ll be free to ascend to the actual afterlife where presumably you won’t need to punch trees or strangle boars for their leather and meat. 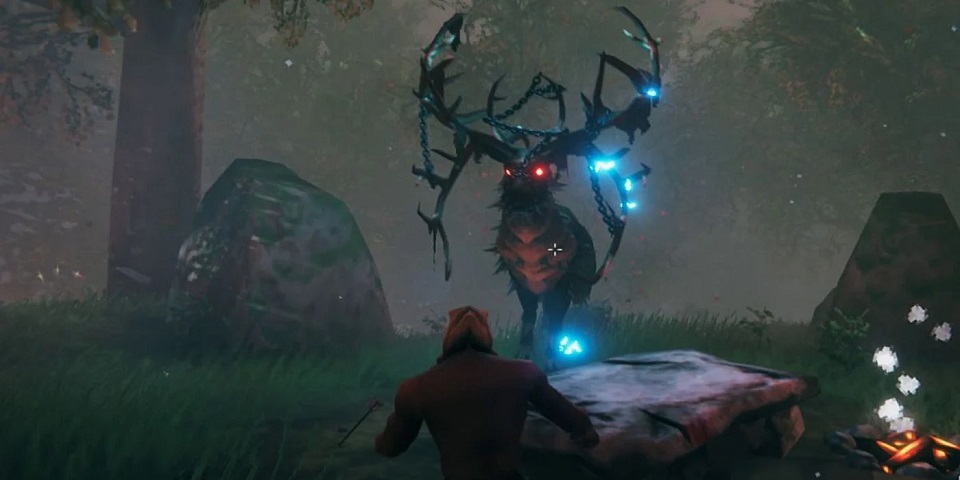 Of course, that’s easier said than done: when you arrive, you’re naked, unarmed, and are completely unprepared to even fight a single dwarf, let alone the monsters that you’re tasked with slaying. Which means before you do anything, you gotta scavenge twicks and rocks, fashion yourself a crude axe, and start the long, exciting journey of sucking less.

In many respects, Valheim is exactly what you would expect out of a survival game, and from that perspective, offers very little compared to its contemporaries. You need to grind for resources, such as copper, stone, and wood, to build a home, crafting stations, tools, weapons, armor, and more. You need to hunt for food to create increasingly more intricate recipes, ships and carts to transport goods across the globe, and you’re hounded by monsters that attack you at night, during the day, and basically whenever you don’t want to see them, like when you’re trying to pave a road or dig up some ore. Everything costs stamina, from attacking to sprinting to being stealthy, so you need to manage that. You have a carrying capacity, and if you go over that, you lose stamina with every step until you can’t move. You have skills, which improve over time (chop more trees to level up woodcutting. Punch more dudes to level up unarmed attacks), but you can lose levels every time you die. When you do die, you’re naked, and you have to run back to the spot where you died to get your stuff.

Nothing revolutionary there, to be honest. One would think that would mean Valhem would fail to capture my attention the way so many other survival games have… but it’s not quite that simple. Because while broad strokes Valheim is every bit the survival game you’d expect it to be, in other ways, it’s stripped away the more ambitious, annoying, and needlessly punishing aspects of the genre to create a much more streamlined experience.

For one: you pretty much always know exactly what you need to do. You need to get stronger so you can beat up tougher monsters. Sure, finding the monsters you need to beat up isn’t always easy, and figuring out how to summon them requires either some very basic problem-solving skills or a quick trip to google, but there’s never been a point where I threw up my hands and wondered “what now”. I pretty much always knew what needed doing… even if sometimes my list of things to do was limited to “explore until you find what you need”, which, I’ll grant you, have been the least favorite moments of my time with this game so far. 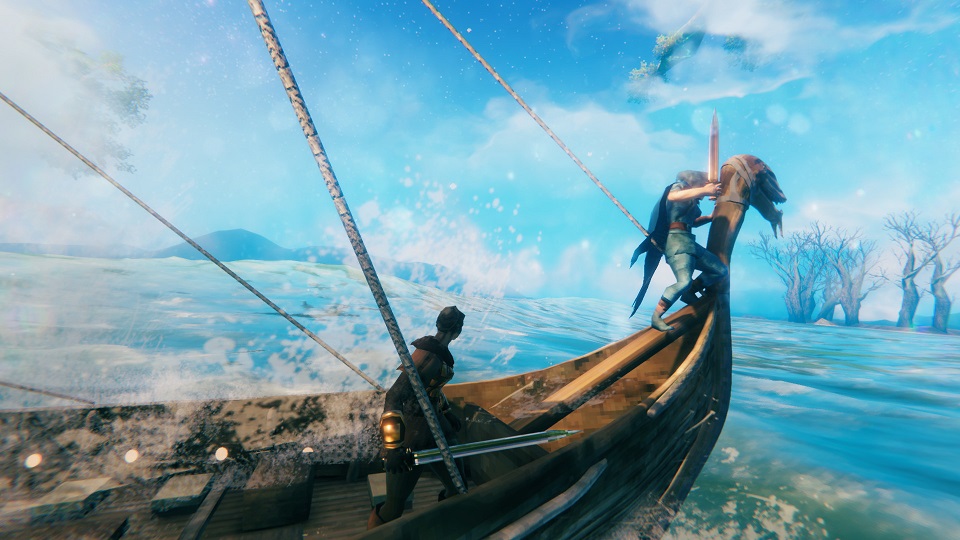 For two: eating is important in Valheim, undeniably so, but not eating won’t mean you starve to death. Rather, food increases your maximum HP and Stamina — vital for surviving what the world throws at you, but if you’re just running around trying to find fine wood, you don’t have to worry about a ticking clock slowly counting down the time before your inevitable end: you can still play the game without needing to scarf a boar’s flank every three minutes. Additionally, while you can make complicated recipes that vastly improve your stats, many of the best foods are incredibly easy to make: boat and deer drop meat. Cook that meat over a fire, and you’ve got one of the most reliable sources of HP and Stamina in the entire game, at least from what I’ve seen so far. Sure, you need three different dishes in order to maximize your stats, but you can get pretty far with a hunk of cooked meat, some berries, and a second hunk of different cooked meat.

Third: the team at Coffee stain studios cleverly re-examined the obstacles that crafting games put in your path, and while they’ve gotten rid of some of the more arcane obstacles that did nothing but frustrated, they’ve added new ones that introduce interesting challenges to the game. For example, if you build something, and you decide you don’t want it there anymore, when you destroy it, you get all your resources back: not 50%, not 90%, all of it. Which means you can build something and destroy it over and over again until it’s exactly where you want it. It doesn’t punish you for misclicking or realizing you need a support beam where you currently have your furnace. You also unlock the ability to build teleporters — and use them — fairly early in the game. Pretty much after you beat the first boss, you can get the materials you need to build teleporters and hop around the world. However — you cannot teleport with ore in your inventory. Considering how valuable ore is, and how heavy it is to carry, this forces you to engage with the other elements of the game, such as carts, road-building, and ship-building, to transport your precious ore to the places where you need it. The obstacles aren’t punishing, per say — but rather, they make sure you experience every element the game has to offer. 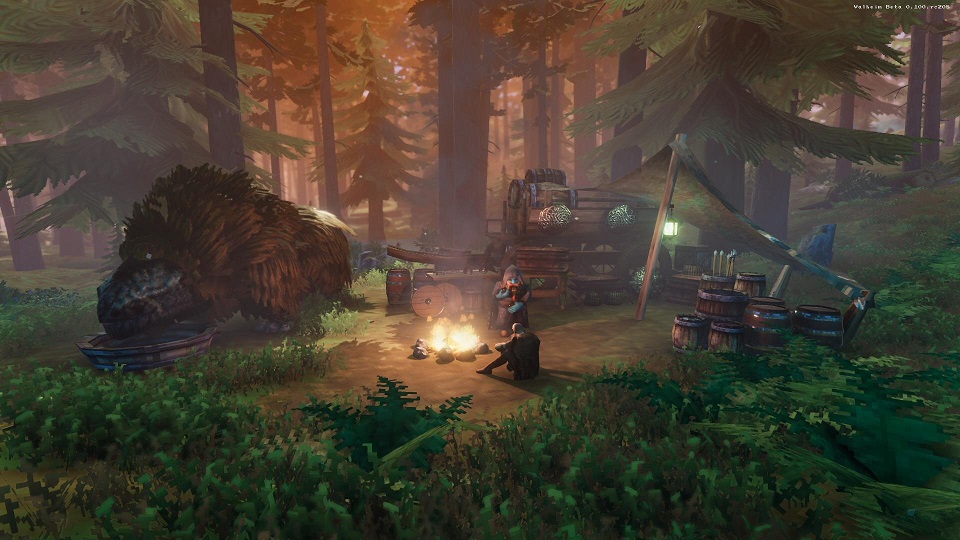 And finally: combat is actually fun. Unlike other crafting games, Valheim has just enough Dark Souls in its DNA that you can actually beat enemies stronger than you with skill and patience. You can parry, dodge-roll, and cheese your way to victory in just about any encounter, even if it’s not always easy and you have to carefully manage your stamina. Just be warned that there are no invincibility frames in Valheim — combat is entirely physics based, so if you get hit by something while you’re rolling, you’re taking all of that damage.

Oh, and did I mention the music is great and it looks damn good?