So far, it's a real winner.

by pocru on Feb 01, 2020 @ 05:00 PM (Staff Bios)
Comment(s)
Last week, Riot Games released the open beta for the first of the many League of Legends-adjacent games that were revealed during their big 10th anniversary event: Legends of Runeterra, a digital trading card game where you build decks out of the many “regions” in League of Legends and throw them at the opponent in a game that’s a comfortable mix between Hearthstone and Magic: The Gathering. I’ve made an account, downloaded the client, played the tutorial and even my own deck, so I figured it would be prudent of me to make a first impression review of a game that has the potential to compete with the big dogs in the DTCG arena. 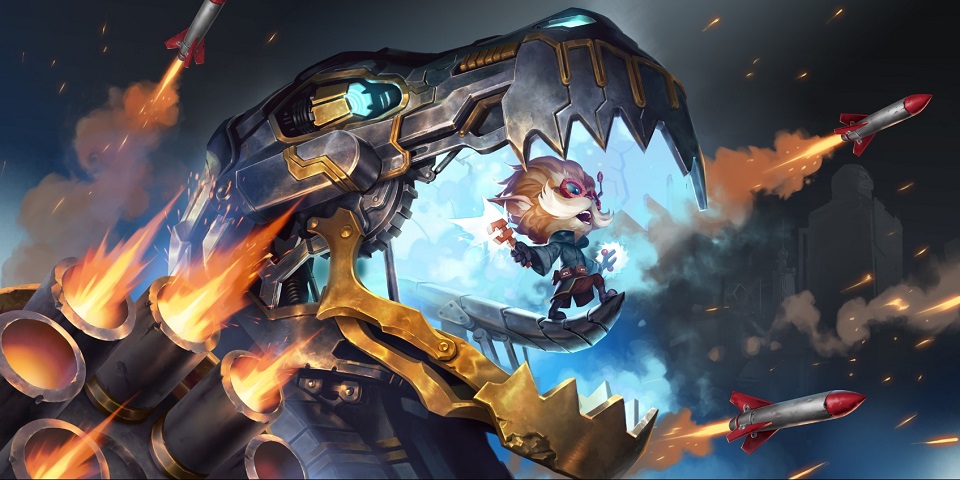 Let’s start by running down the basics.

In Legend of Runeterra, your objective is to get your opponent’s nexus down to 0 HP, while making sure they don’t do the same to you first. You do this by employing a deck of exactly 40 cards, which are made up of cards drawn from one of six “regions” all around the League of Legends universe. Your deck can be made up of only cards from one region, or you can mix a second region in there as well, but you can’t go up to three.

The regions are as follows: Demacia, a city-state of anti-magic knights and nobles, Noxus, a brutal nation where strength is all, the Frelord, a frozen tundra where nomadic tribes live, Ionia, a spiritual island of ninjas and martial arts, Piltover and Zaun, an enormous metropolis build on steampunk technology, and the Shadow Isles, where ghosts and specters haunt the living.

Broadly speaking, each region’s card follows a theme and are optimized for a certain kind of play. Demacia has tough individual units and focus a lot on buffs and keeping units alive. Noxus likes dealing damage to the enemy nexus directly, and units that can overwhelm foes. Frelord has a lot of cards that can buff cards still in the deck, and take advantage of the frostbite status, which reduces enemy’s attacks to zero. Ionia is tricky, with stuns and heavy use of recalling units into their players hands, either by choice or by force. Piltover and Zaun have fast units that can attack first and deal direct damage to units. And The Shadow Isles involves a lot of sacrificing weaker units you can summon as a swarm for big effects. 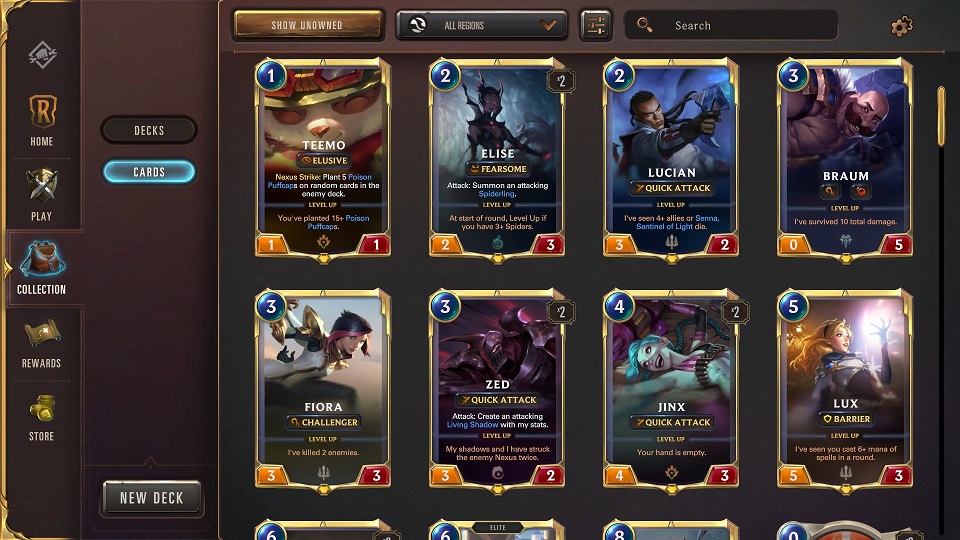 That’s not to say there isn’t any overlap between regions – you’ll find “Overwhelm” on cards outside of Noxus, for example, and just about every region has direct damage spells – but generally speaking it’s to your advantage to mix the strengths of one region with the strengths of another. For example, in my current deck, I use the buffs of the Frelord cards to boost and support my Demacian cards, making already tough cards even tougher to break through.

Once you have your deck and start playing, the game starts to illustrate its main gimmicks right off the bat. Rather than taking “turns”, where you just watch your opponent do crap like in Magic the Gathering or Hearthstone, each round you alternate who’s attacking and who’s defending. Attackers start the round, but every time they take an action (which is to say, play most cards), the defender can also take an action in response. So if the attacker summons a new unit to the field, the defender can cast a spell, or summon their own unit, in response.

The exception is attacking. If the attacker declares an attack, the defender has to use the cards they have on the field, or “burst” spells that can be played at any time. So when you’re attacking, deciding when on your turn to declare an attack is important: if you have an advantageous field, would it be better to play a card and build on that advantage, at the risk of letting your opponent counter-move? Or do you just attack immediately and do what you can. That decision-making process is part of the key distinctions that makes Legends of Runeterra unique.

Once an attack is declared, the defender uses unit cards on the field to “block” attacking cards, much like in Magic: The Gathering. The two cards clash, they deal their attack to each other’s HP, and they either die or they return to their side of the field, victorious but wounded. If the defender doesn’t block an attacking card, the damage is dealt to their nexus instead. Unlike Magic: The Gathering, however, defenders don’t normally heal at the end of the round, so it’s possible, technically, to whittle away at stronger cards with weaker ones.

The second unique selling point to Legends of Runeterra are the champions, special units pulled straight from League of Legends that operate a bit differently from your average card, and are limited to six in each deck. Champions are appreciably more powerful than other units you can summon for their mana cost: Garen, for example, has 5 attack and 5 HP, regenerates at the end of each round, so you can attack or defend with him and be more or less confident that he’ll be back at full strength when the round ends. But what makes them especially unique is that they have special conditions, like mini quests, that players will want to complete with them. Garen has to strike twice. Lux has to be on the field when you cast up to 6 mana worth of spells. Elise needs to share the field with 3 other spiders. Jinx needs you to empty your hand.

Once you complete these objectives, the champions level up, getting more power and unique abilities. Garen gets 6 attack and 6 HP, as well as “Rally”, which means you can attack even when you’re on the defending side. Lux conjures another free spell after you cast a spell from your hand. Elise gives spiders more power and the “fearsome” ability, which means they can’t be blocked by weaker cards. They’re powerful enough that you almost certainly want to complete the objectives, but the big downside is that your opponent doesn’t have a lot of counterplay to most of these objectives outside trying to kill your champion before they’re completed. You can kill the spiderlings for Elise, for example, but for Jinx – it’s not like you can make your opponent draw more cards.

Once you decide you can’t do anything on your turn, you can “pass” as your action. Once both players pass, the round ends, attackers become defenders and vice versa, and you draw a new card.

Now, I’m not a TCG expert by any means. I’ve played Magic the Gathering, and Hearthstone as well, which is good because this game literally is a fusion of the two with a few gimmicks added on the side, but I can honestly say I enjoy this game more than both of them. The auto-resource is a lot less irritating for me than trying to manage mana in Magic: The Gathering (while it can be nice to draw a mana card, it’s never very satisfying), and thanks to the fact that it’s all very new, it doesn’t have the insane strategies and obscenely high skill cap you need to play Hearthstone, or any other long-lived trading card game like Yu-Gi-Oh. That will probably change as they release expansions and add more complicated mechanics, but for now, I think the general simplicity of the game loans itself well to beginner play. As long as you have a vague idea of what it is you want your deck to do, and you build your deck with a modicum of competency, you’ll generally be competitive with other player’s decks – this is very much not a game where you can lose at the deck-building phase yet. As I said, later that may change, but for now the relative simplicity does it well.

It's also not a game that seems terribly dependent on microtransactions. You can spend money on a new “mascot”, or on a new arena to play your cards in, as well as “wildcards” that can be redeemed for any card you want. But generally you get new cards and resources for new cards at a good enough clip that I yet to feel pressured to buy it. Maybe that will change as I reach higher levels and my progression slows down, but for now I’m willing to give Riot the benefit of the doubt.

Right now, I would strongly recommend giving the game a go. Better to get in now, before power creep and more ambitious microtransactions are added, so you can have your fun before you try your luck with whatever new TCG this no doubt inspires.