Not good if you hate sand.

by pocru on Mar 14, 2021 @ 02:20 AM (Staff Bios)
Comment(s)
Let’s see, I was going to talk about Loop Hero this week, since that just came out, but then a new Legends of Runeterra expansion came out, Empires of the Ascended, and since we’ve covered the last two updates with big ol’ articles like this, I figure we may as well keep the tradition alive. It’s not as if Loop Hero is going anywhere — in fact, that’s the whole thesis of that particular title.

Anyway, before we dive into Empires of the Ascended, I feel a quick disclaimer is in order: when I first reviewed the last update, Call of the Mountain, I only reviewed the first “wave” of that expansion. More waves were released, and while most of them only added new champions — like Riven, who focuses on creating powerful, cheap buffs, and Zoe, who rewards players who have chaotic decks with very little repetition — they did introduce elements that play a role in this newest mega-expansion that warrant a quick introduction.

Specifically, Call of the Mountain later introduced a new type of card called “Landmarks”. These bad boys take up space on the unit bench, but can’t attack or be attacked the way a normal unit can. Rather, they change the field of play — generally to your advantage, but not exclusively — and typically become the cornerstone by which you build the rest of your deck, not dissimilarly to Champions. For example, there’s a landmark that let’s players draw one extra card at the start of each round. Or a landmark that makes your strongest unit and the enemy’s weakest unit fight at the end of each turn. Some landmarks basically become victory conditions, like the Star Spring, which wins you the game if you manage to heal 22 points of damage in the duration of a match.

I bring this up specifically because Empires of the Ascended is all about landmarks. Whereas before there were only a handful of landmarks, one or two for each region, Shurima has added nearly a dozen more, and several new champions basically operate entirely around them.

Anyway, Sharima, lore-wise, is an Egyption-inspired land of sands, ruins, and divinity, where people “ascend” into part-animal forms to reach levels of untold power and prestige. The realm is split nicely between “modern scavengers and mercenaries” and “ancient beings trying to revive the glory days”, so, no matter what story gets your juices flowing, you have options.

Mechanically, Shirama is focused on landmarks, countdowns, and overwhelming force. The most important mechanic is that most of Shirma’s heroes — 3 of the 5 released at launch — are “Ascended”. Ascended champions are unique insofar that unlike most champions, they can actually level up three times instead of just two. The first time they level up, it’s through your standard method — Renekton, a brutal crocodile butcher guy, needs to deal 12 points of damage. Nasus, a wise dog boy, needs to strike for 10+ damage in one go. And Azir, a bird emperor, needs you to summon 10 characters. After they level up the first time though, to level them up a second time, you need a certain landmark — specifically the Buried Sun Disk — to countdown to 0 (we’ll get to that in a second). Once it does, it’ll restore itself, and all your level 2 champions become level 3, and you functionally win the game.

This segways nicely to one of the other new mechanics added to the game: countdowns. It’s pretty much exactly what it sounds like — a unit or a landmark will have a countdown number, and every turn that passes, that number goes down by one. Once it hits 0, an effect happens, generally good for you and bad for whoever you’re up against. As you might expect, there are ways to speed up your own countdowns: the Buried Sun Disk advances 10 rounds whenever you level up an ascended champion, for example, which is good (?) because otherwise you’d need to wait 25 rounds to make that happen.

Shirma is also the first region that seems optimized for isolated play — that is to say, it’s at its most powerful when it's not merged with another region. The Sun Disk, for example, is automatically put in your hand at the start of the game if you only have cards from Sharima in your deck. Additionally, Shirma has a lot of ways to get the ascended units you need onto the field in a hurry: heck, their allegiance card (a card that triggers if the next card in your deck is from your region, which is generally only used in single-region decks) lets you draw a champion from your deck and give it a +3 in both stats — and I have yet to face off against a Shirma deck that hasn’t played the heck out of it. 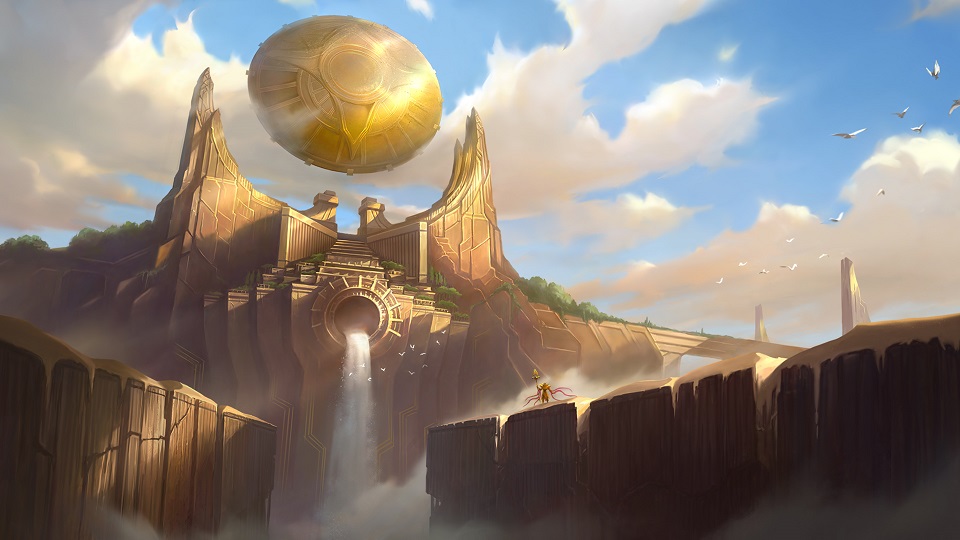 That’s not to say it has no tools that other decks can’t use. Another new mechanic, “Reputation”, improves a card's skills (or just reduces its cost) if you manage to deal 5+ damage attacks 4 times during the game, which rewards people who play hard and fast with their powerful slayers— a popular pick for the heavy hitting Noxus cards. Another new mechanic, “Slay”, triggers whenever you directly kill any unit on the field, ally or enemy alike, which pairs nicely with Shadow Isles, which allow you to kill your own units with a blatant disregard befitting gods of death. Then there’s “predict”, which lets you see the top three cards in your deck, put one on the top, and then shuffle your deck. Only a small handful of cards use this mechanic, but it’s generic enough that you can expect that more cards across all the regions to have this keyword.

And the other Shurima champions certainly loan themselves to other decks as well. Talya, for example, lets you replicate a landmark on your side of the field, and when she levels up (by you playing a lot of landmarks), she gets a meaningful but not game-changing ability to hammer either defenders or the nexus with a flurry of stones before she strikes in combat. Sivir, on the other hand, has spell shield and quick attack, and once she sees you deal 35 damage in the game, will share those keywords — and any other keywords she has on her — with anyone else who attacks with her during a combat phase.

All of which is nice, but… frankly, the power being offered by the Shirma deck is insane. Nasus gets +1 attack and HP for every unit he slays, and when he levels up, he gets a spell shield and reduces enemy attack by -1 — which is bad, considering he’s also got fearsome, meaning it gets harder to block his universally devastating blows. Level him up a third time, and all enemies get -3, and his base stats go up to 10/10… on top of the +1 he’s been getting all game. On the other hand, Renekton gets a +2/+1 on a round he challenges enemies, which is nice for his base 4/4 stats. Level him up, however, and he becomes a 5/5 beast that gets +3 in both stats whenever he attacks. At the final level, he gets 10/10 stats, and whenever he blocks or attacks, he deals 2 damage to everything on your enemies side of the field. Oh, and he has overwhelm at every level, so…. good luck dealing with that. 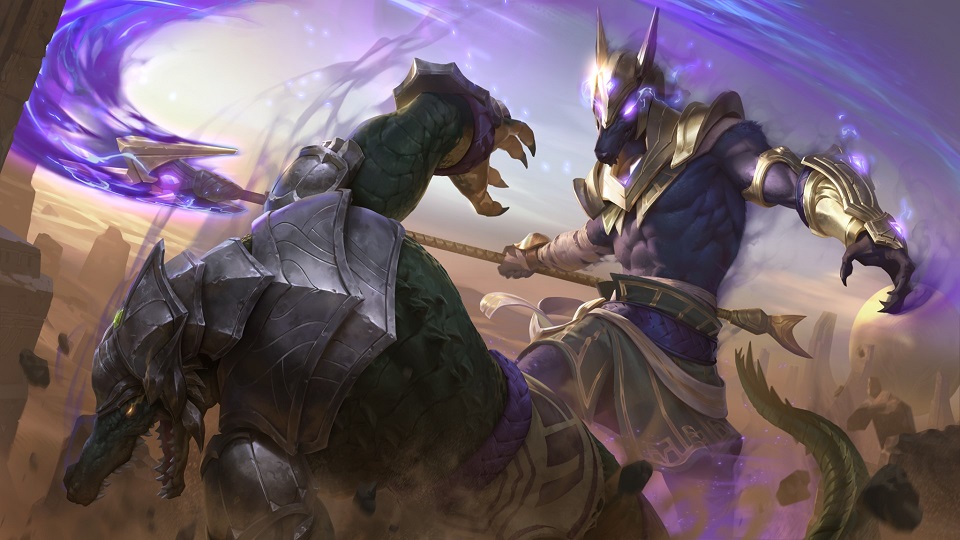 And if that doesn’t make things hard enough, Azir, the emperor of this sandy empire, is the most wild. At level 1, he’s a 1/5 tank that allows you to summon a 1/1 sand soldier every time you declare an attack. Level him up, and he’ll give both himself and new summons +1 attack every time they’re summoned for a round. A powerful but manageable skill, for a 3-cost champion that can summon a unit every time there’s an attack declared. But at level 3, he becomes a 6/6 champion that replaces your entire deck with an Emperor’s Deck, which is loaded with insanely powerful cards that have a significantly reduced mana cost. He also adds a 5/2 sandstone charger to every attack lineup, which basically means you win the game. I’ve only been able to barely survive a few rounds when up against the Emperor’s Deck — the notion of actually beating it seems impossible to me, unless you've made the enemy super weak and can deal a lot of direct damage to their nexus.

All of this is to say that this is the first expansion that feels categorically broken. In the past, I’ve complemented Riot’s ability to avoid power creep, but in my week and a half of playing, I have yet to beat a solo Shirma deck. Its tools and champions are too powerful, and its too easy to get exactly what you need the moment you need it. The only real counterplay is to have cards that can destroy the sun disk, but… that’s based on luck, since you can’t search for those cards the way Shirma decks can search for the champions that make them so damn powerful.

In any case, a quick roundup of other new heroes added to the game: Jarvan the 4th has been added to Demacia, along with cards that enhance and reward challenger-based decks. Kindred was added to The Shadow Isle, which allows you to automatically slay enemy units and get more powerful the more you kill. Noxus added LeBlanc, which hits hard, and lets you summon duplicates of your most powerful units cheaply so you can continue to hit hard. And Frejord added Lissandra, which allows you to create a ticking clock where if you manage to summon enough powerful creatures, you can summon what is without question the most epic monster in the game, the Watcher, which obliterates your opponents deck the moment it declares an attack. A lot to like there. But nothing that really tops what a base Sharima deck has to offer. 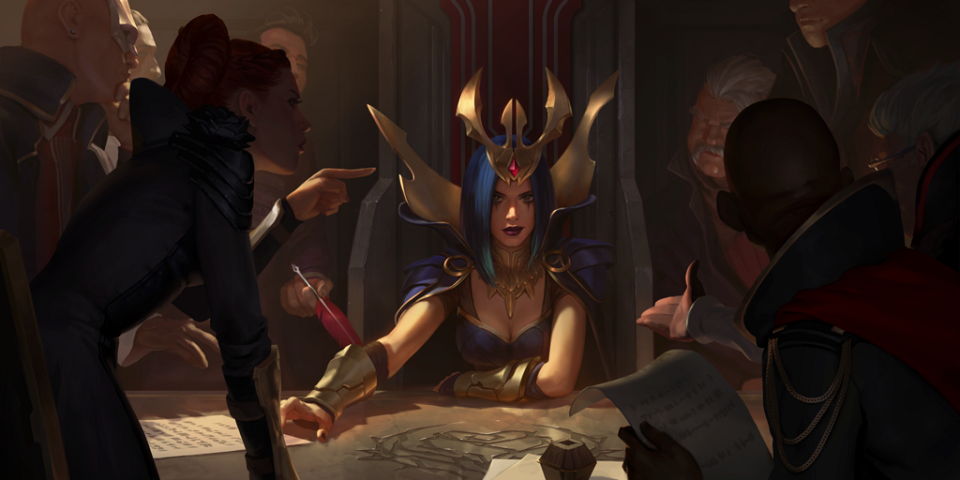 Which is sad, but the way the cookie crumbles.